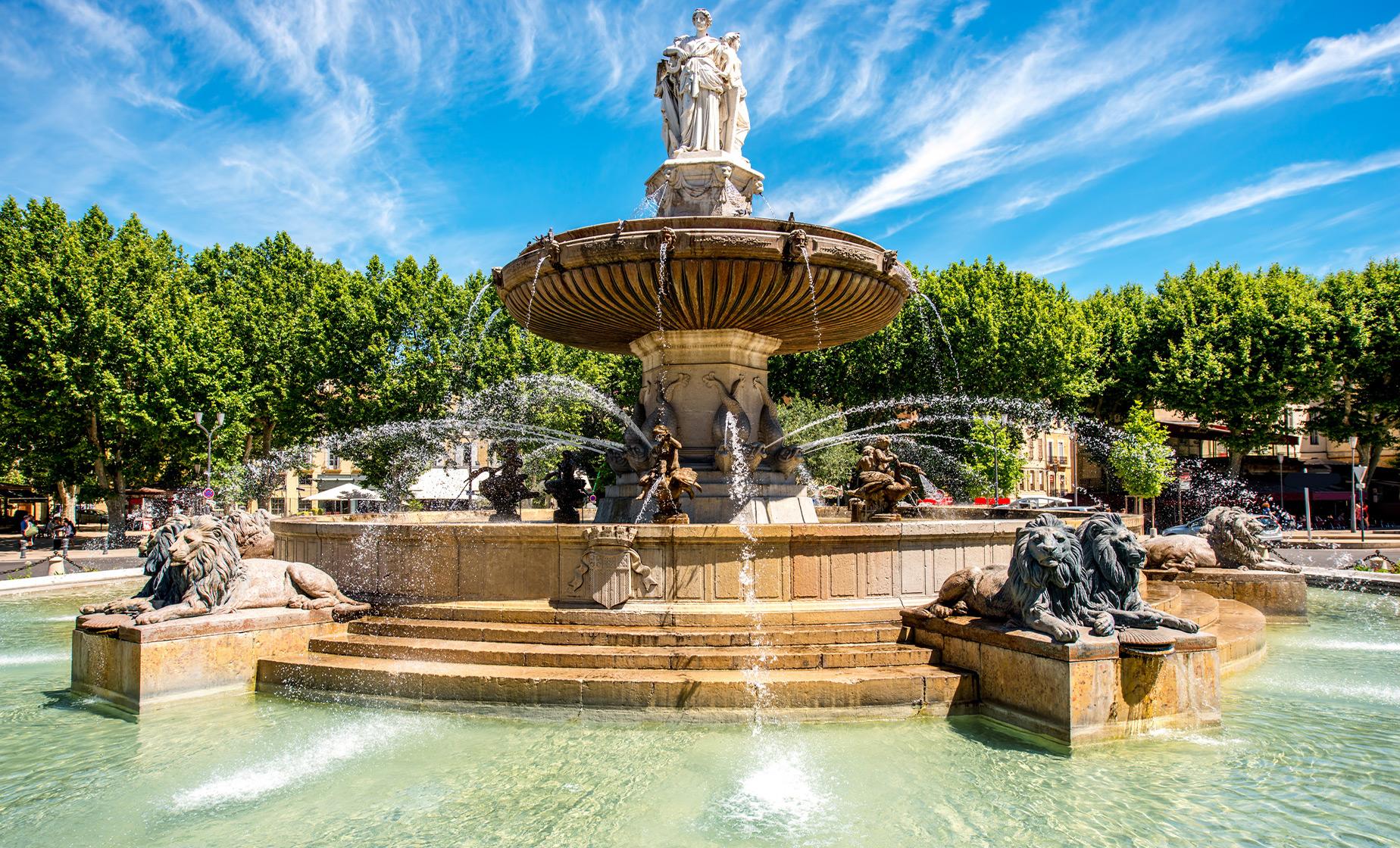 4.4 / 5  |  37 ReviewsReview This Tour
Price: $142.00
Choose Options My Cruise Itinerary
Summary
Shore Excursion SizeStandard
Shore Excursion TypeScenic
Shore Excursion Duration7 Hours 30 Minutes
Activity LevelModerate
Shore Excursion Leaves FromCruise Pier
Food/Beverage ProvidedNot Included
Recommended DressWe recommend wearing comfortable clothing and sensible rubber soled walking shoes. If you plan to visit a religious site or memorial, shoulders and knees must be covered. Sun screen and sun glasses are also suggested.
RestrictionsGuests must be able to walk on paved, packed dirt, gravel and numerous cobblestone surfaces, some on inclines. There are steps at several of the sites. Fold up wheelchairs can be stored on the transportation with advance notice. Aix is not a wheelchair friendly town.

Departing the pier in Marseilles with your group of no more than 30 guests, often times smaller, you will drive from the coast to the charming city of Aix en Provence, (Aix) approximately 50 minutes drive away. Along the way, your driver/guide will give you information about the area and the town you will be visiting. Aix, the former medieval capital of Provence, was founded in 123 BC by the Romans, and boasts elegant 16th to 18th century architecture, wide tree-lined boulevards, charming cafes, and shopping opportunities. You will soon see why it was a place of inspiration for artists such as Cezanne and writers including Hemingway.

Upon arrival, you will be dropped off next to the Rotonde Square, where the Rotunda Fountain, erected in 1860 and the largest in the city, is located. From here, it is a short walk to the Cours Mirabeau, the city's "Main" street. You will have approximately 3 hours 30 minutes of free time during which you will be able to stroll through the Old Town and see such sites as the stunning 12th-century Cathedral Saint-Sauveur, with architecture styles from the 5th to 17th century. The Hotel de Ville, a classical style building from the middle of the 17th century, overlooks the Place de l'Hotel de Ville Square, a wonderful place for watching the locals. At its side rises a clock-tower first built in 1510. Other buildings of note include the ornately decorated former Corn Exchange (17th century), the 1705 spa built near the remains of the ancient Roman baths of Sextius.

South of the Cours Mirabeau is the Quartier Mazarin. This residential district was constructed for the gentry of Aix in the last half of the 17th century and contains several notable grand townhouses. Here you can also find the Church of Saint-Jean-de-Malte (13th century) and the Musee Granet, devoted to European painting and sculpture.

Aix is often referred to as the city of a thousand fountains, as you will begin to see as you walk down the Cours Mirabeau. During your stroll you may see the 17th century Fontaine des Quatre Dauphins (Fountain of the Four Dolphins) in the Quartier Mazarin, as well as other fountains of note in the Place d'Albertas and the Place des Trois-Ormeaux. Some date back to the Romans.

Nestled in between all this charming architecture are the markets, galleries, antique emporiums and cafes. During your free time, you may want to enjoy lunch (not included) at a cafe or restaurant of your choice. If you find one of the numerous markets taking place everyday in the center of the city, you may wish to just snack your way through it.

Departing Aix, you will drive to the seaside city of Marseilles. Here your driver will take you on a panoramic drive through the city. A 20 minute stop will be made at Notre-Dame de la Garde Hill to either take a quick look at the basilica or to take pictures of the panoramic view over the city, harbor, Frioul islands, and the castle. Your drive will continue on the Corniche Road along the seashore, where the merchants and bourgeois of the 19th century showed off their wealth with magnificent houses featuring ostentatious decorations. A photo stop will also be made at Saint-Victor Abbey before going back to the cruise pier.

Dress
We recommend wearing comfortable clothing and sensible rubber soled walking shoes. If you plan to visit a religious site or memorial, shoulders and knees must be covered. Sun screen and sun glasses are also suggested.

Restrictions
Guests must be able to walk on paved, packed dirt, gravel and numerous cobblestone surfaces, some on inclines. There are steps at several of the sites. Fold up wheelchairs can be stored on the transportation with advance notice. Aix is not a wheelchair friendly town.

4.4 / 5  |  37 ReviewsReview This Tour
Small private tour
This was a small and intimate tour which included our family of four and another couple. Private vehicle and tour guide. First part of the tour was guided and the second was on our own which gave us time for a relaxing meal and time to stroll the markets
Reviewer: NORMA JONES-IVES

Very Nice Excursion!
Our cruise line stopped at Marseilles and I was not overly interested in visiting that city ... so I booked the Aix trip. Aix is a beautiful little city in Provence and it truly captured our hearts. The town is picture perfect with upscale shops and inviting bistros lining the streets. The tour basically is a bus ride to Aix and then free time to do as you wish. Then, on the way back there is a stop to the Cathedral Notre Dame overlooking Marseilles. The cathedral is absolutely stunning and the views of the city below are wonderful. The only negative is that there was a good 10+ minute walk (close to a mile) from the ship to the bus. My girlfriend has MS and struggled with this walk as did some of the older people on this tour.
Reviewer: Doug Hindman

Pretty Place
Tour bus was very nice and comfortable. The sites in France were beautiful. We did have plenty of free time to go shop and eat lunch on our own. The reason I did not give this a 5 Star was for several reasons. First, we were supposed to stop to see several spots to take pictures and the tour guide chose not to have the driver stop even though other buses were moving. When asked about the importance of these places by another guest the guide said “Im here to show you my country not give history lessons” ! This was a nice tour don’t get me wrong I fully enjoyed it bc had a lot of alone time to explore. Also, on this trip you go to this church St George and it is beautiful !!!!!!! The pictures you get from the top of the church are breath taking . You can see all of the Towns and the beautiful Mediterranean Sea! You also do a ton of walking and climbing flights of stairs to get up to the church . Very enjoyable tour over all!
Reviewer: Krista Clavecilla

Aix En Provence and Marseilles
Good tour with a very knowledgeable guide. Two plus hours in Aix at lunch time and then return to Marsellies for a tour of Notre Dame de Garde.
Reviewer: Paul J Tantalo