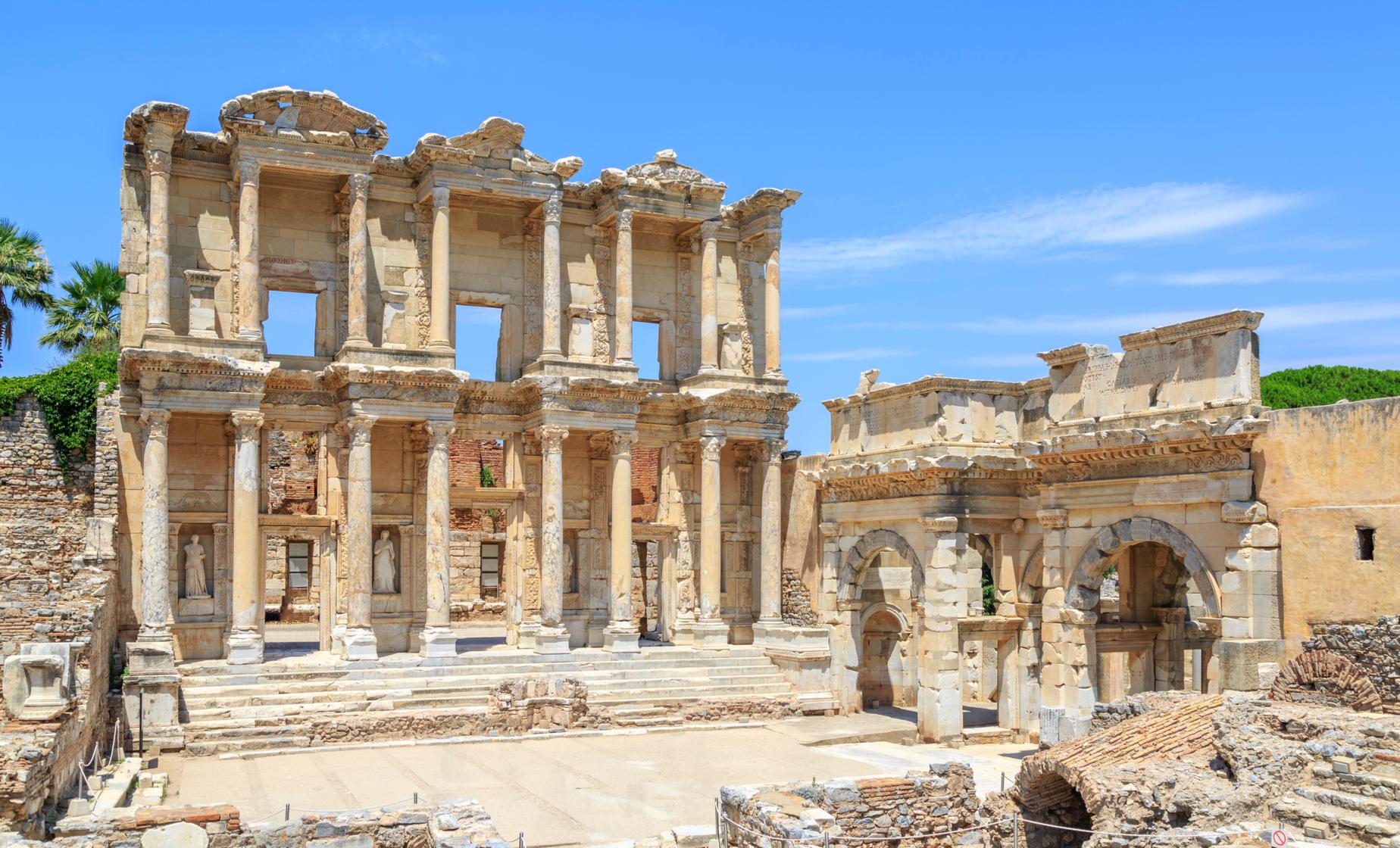 4.5 / 5  |  2 ReviewsReview This Tour
From $64.00/person to $174.00/person (Select "Individuals" below) Price varies based on number of individuals in your group
Choose Options My Cruise Itinerary
Summary
Shore Excursion Size

Cruise Ship Pier
Food/Beverage Provided None
Recommended Dress Comfortable clothing and closed toe, sensible walking shoes are recommended. Sunglasses and sunscreen are suggested.
Restrictions Walking at Ephesus is over actual streets / sidewalks from ancient times which are uneven and worn. There are steps without hand rails and packed dirt that must be navigated in some areas.

Meet your professionally trained guide at Kusadasi and set out for your private Ephesus shore excursion tour. This fascinating, ancient city is located approximately 30 minutes from Kusadasi. Famous in antiquity for its Temple of Artemus during the years of the Roman Empire, the Greek port of Ephesus became the greatest city in Asia Minor. You will start your Ephesus excursion at the upper Magnesia Gate, and work your way down through the city ending near the ancient Harbor. Along the way you will see the Forum, the Odeon, the Library of Celsus, the Thermal Baths of Scolastika and the Great Theater, built in the Greek era and reconstructed in the Roman period. It has played host to programs as varied as St. Paul and his sermons to the Ephesians, and concerts by Sting, in part due to its remarkable acoustics.

Returning to the town of Kusadasi, guests will have the option to end their tour in the shopping area where they can attend a Turkish carpet explanation and shopping. Explore the shops filled with jewelry, carpets, leather ware, and copper goods, or both. Turkish salespeople expect you to haggle and quite often you can get 10-15% off the listed price. Treat it as an adventure. The cruise pier is a 5-10 minute walk from the main shopping area.

4.5 / 5  |  2 ReviewsReview This Tour
Worthwhile
We thoroughly enjoyed our tour. Our guide was charming and quite informative, answering our many questions. I walk with a cane and found it difficult to navigate the slick marble streets of Ephesus, but the guide was helpful and made sure I didn't fall. We were firm about not wanting to buy souvenirs or watch a rug presentation at the end, and he took us right back to the port after the tour. Along with our other excursion in the morning (horse ride to the beach, also excellent) we had a full, fun day in Kusadasi and really enjoyed Turkey.
Reviewer: Tup S

A walk in history
Despite the constant drizzle, we really enjoyed our walk through Ancient Ephesus. The crowds weren't too bad, but the huge number of umbrellas made walking dangerous. Our guide was very informative. Because we did not have a map or a specific outline of sights that would be seen, we feel that we may have missed some interesting things as there were a lot of people in other areas that we did not go to. We did see the sights described in the tour advertisement. Beware of the carpet tour. Learning how carpets were made was informative but the endless displays of carpets that were presented to us, got to be too much. They brought in four people to try to get us to buy a carpet. We finally had to just get up and leave as we had told them twice that we didn't want to miss our ship. We were 10 minutes late getting back to the ship. Luckily there was a long line to get back on and we were able to board without any incident.
Reviewer: Cruisingnanny