Best of Vancouver, Juneau, and Ketchikan 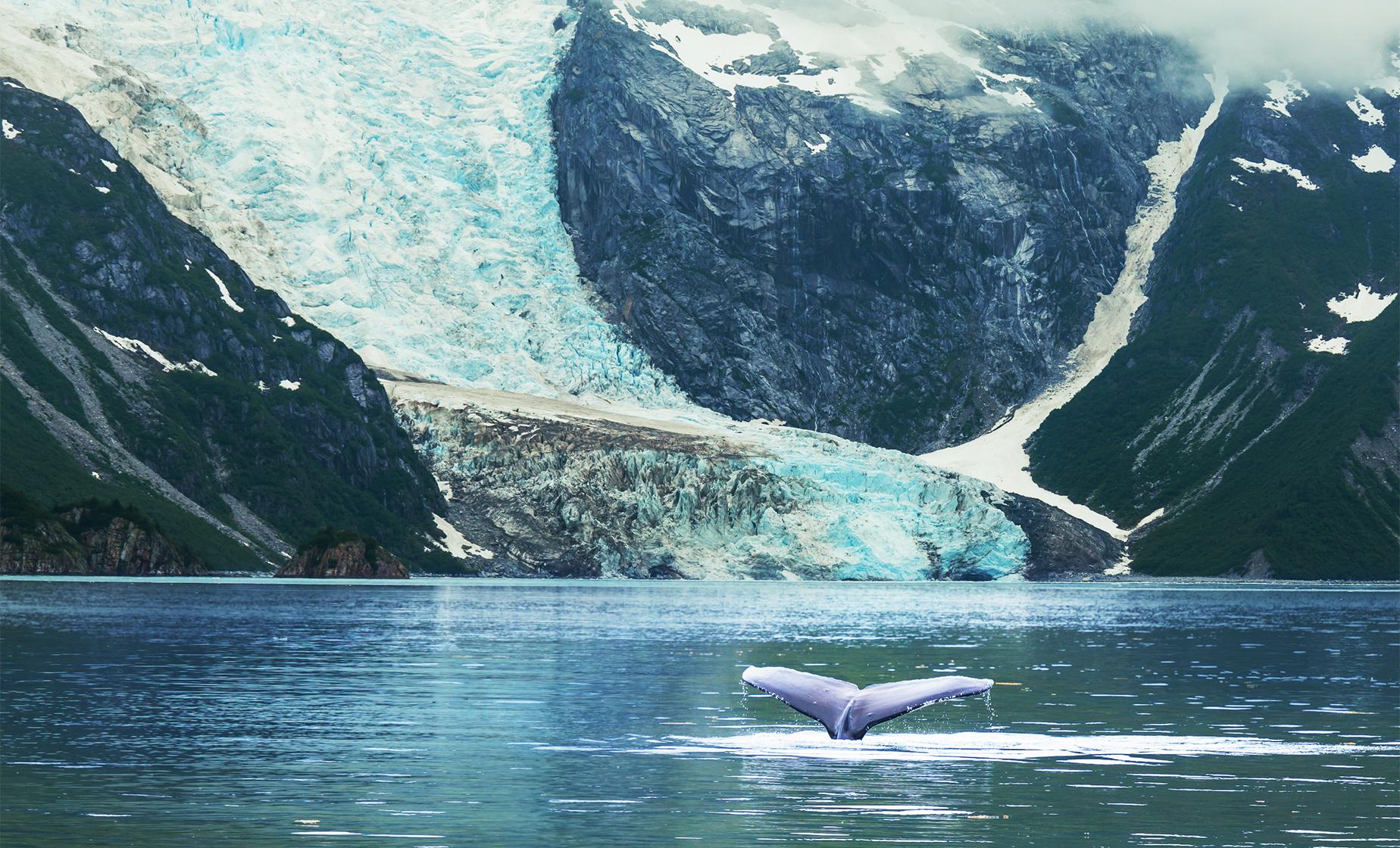 An approximately 5 to 25 minute walk, or an approximately 5 minute shuttle ride (not included, approximately $5 US per person) is required to reach your departure location.
Food/Beverage Provided A snack and coffee is included.
Recommended Dress For all tours in Alaska, we recommend dressing in layers with the top layer being waterproof. Participants should dress in warm layers appropriate for changing weather conditions and temperatures, and comfortable waterproofed walking shoes.
Restrictions Guests must be able to navigate a ramp that leads to a floating dock to access the boat. Due to dramatic tidal changes, this ramp may be steep. Folding wheelchairs are permitted on this tour, but must be stored at the office while on the boat. Walking at the visitors center includes some steps and inclines. Guests 12 and under must be accompanied by an adult of 18 or older.

Spectacular whales and the Mendenhall Glacier; All in a half-day Juneau excursion on a boat holding a maximum of only 40 guests. Whale viewing is guaranteed.

Your Juneau excursion adventure begins with a short drive to a scenic harbor. Here, you will board a mammal-friendly jet boat equipped with water jet drives to ensure a quiet underwater operation without dangerous propellers that may frighten or harm the animals. The boats have an enclosed and heated cabin, complete with indoor plumbing. In addition, the boat only holds a maximum of 40 guests. There are large viewing windows and an outdoor viewing deck, providing an up-close and personal experience while you observe and photograph the animals in their natural surroundings.

On this Juneau excursion, you will be on the boat for approximately two hours in an area that the whales frequent every summer.

Returning to land, you will travel further into the valley to see the only "drive up" glacier in Southeast Alaska. Once you arrive at the Visitor's Center (entrance included), you will have approximately 45 minutes to explore on your own. Enjoy an elevated view of the glacier across the Mendenhall Lake, see the exhibits, or watch a short film about the Juneau Ice Fields. For those guests feeling more adventurous during this Juneau excursion, there are several hiking paths around the lake area, including Photo Point Trail, which winds along Mendenhall Lake to an unobstructed view of the glacier face. At the appointed time, meet your guide for the trip back to town.

An approximately 5 to 10 minute walk from the cruise ship pier.
Food/Beverage Provided A hearty Alaskan-style snack and beverages are included.
Recommended Dress For all Alaska tours, we recommend layers of clothing, with the top layer being waterproof. We also suggest wearing gloves and comfortable walking shoes that may get wet.
Restrictions This tour is not wheelchair accessible. Drivers must be at least 25 years of age, are required to show a valid driver's license, and must sign a waiver. Children must be a minimum of 5 years of age and weigh more than 40 pounds. Booster seats for children ages 5 to 8 are available upon request. Children ages 12 and younger must be accompanied by an adult, and children ages 13 to 17 must have a signed parental consent form to participate in the absence of a parent or guardian. Jeeps hold a maximum of four guests, who must be belted in.

This scenic Ketchikan shore excursion combines three different nature experiences into one convenient package. Fill your senses with adventure and excitement as you take control of a 4-wheel drive Jeep Wrangler and navigate your way through the rugged backroads of Revillagigedo Island. Then, grab a paddle and make some friends aboard a 37-foot, 20-passenger Alaskan-style canoe, drifting across a gorgeous mountain lake.

For the Jeep portion of this Ketchikan excursion, you'll be paired into groups of 4 and depart on your adventure into the mountainous roads of the Tongass National Forest. The scenic route takes you through lush rainforest, up mountain roads to breathtaking scenery and vantage points. Your professional Ketchikan tour guide provides interesting and informative commentary along your drive through two-way radio.

Learn about the timber industry's reforestation methods while you stop for fantastic views and photo opportunities. If other guests would like to drive the vehicle, several stops are available along the route to change drivers. Conclude your drive by arriving at the stunning Lake Harriet Hunt. A unique ecosystem awaits, which you can enjoy from the vantage point of a large, easy to paddle guided canoe. Keep an eye out for the sundew, a rare carnivorous plant. On the other side of the lake, your expert safari guide leads a nature hike through an old-growth forest. A camp is located nearby with Alaskan snacks to refuel you. A short narrated transfer brings you back to base camp and Ketchikan.

Book this incredible Ketchikan shore excursion for a memorable day in the Alaskan outdoors. Awe-inspiring scenery and activities await!

Numerous bus and trolley stops throughout Vancouver. An approximately 5-minute walk is required to reach the closest stop.
Food/Beverage Provided Not Included
Recommended Dress We recommend wearing comfortable clothing and sensible rubber-soled walking shoes. Sunglasses and sunscreen are also suggested.
Restrictions Guests must be able to walk over paved, gravel, and packed dirt surfaces, some of which are uneven or on an incline. This tour is not wheelchair accessible. Luggage and strollers cannot be accommodated. Baggage storage services are available for cruise guests at Canada Place for an additional fee (not included). For security reasons, short-term baggage storage is available to cruise passengers only. Pets are not permitted onboard the trolley, with the exception of official guide dogs or service animals. Aside from water and baby bottles, food and drink is not allowed.

This hop-on, hop-off tour is the easiest way to enjoy Vancouver's most popular areas: Stanley Park, Chinatown, Gastown, Granville Island and more! Explore Vancouver onboard clear-top buses and San Francisco-style trolleys. The tour features a live commentary on the trolleys and a number of languages on the open top buses, so you'll have the opportunity to learn what makes this spectacular city so special. Take advantage of two routes that will take you all across the city; both are included in your hop-on hop-off tour of Vancouver.

Make sure to take time to visit Stanley Park, opened in the late 19th century and boasting over 1,000 acres of west coast evergreen rainforest. Wander about cedar, hemlock, and fir trees before enjoying the stunning views from Prospect Point. Once at Prospect Point, take in the spectacular views of Lions Gate Bridge, the North Shore's magnificent mountains, and the bustle of Vancouver's harbor below. It can safely be stated that all of Stanley Park is one great big garden. The Rose Gardens, situated just steps from the Georgia Street entrance to the park, is a true inspiration and a "must see" for garden enthusiasts as well as Vancouver's most popular destination for wedding photos. The park is also home to the famous Totem Poles, a culturally rich and visually stunning sight! The totems found here are representative of the art and society of many of B.C.'s Native Nations.

Be sure to make a stop at the bustling Granville Island while on your Vancouver tour. This peninsula and shopping district includes a stunning marina, wonderful art galleries, cute boutiques, and is perhaps best known for its Public Market. The Granville Island Public Market features colorful booths that display unique homemade good and products, perfect for that souvenir to remind you about your Vancouver tour.

Discover the thrill of space adventure as you voyage to the outer edges of the universe at the Space Center, or admire a tranquil yet vibrant expression of Ming Dynasty culture at the Dr. Sun Yat-Sen Garden in the midst of Chinatown. If you wish, enjoy time in Gastown, Vancouver's oldest neighborhood, which has earned its place among the National Historic Sites of Canada for its history, grand Victorian buildings, and thriving urban lifestyle. Explore Vancouver at your own pace on this charming and convenient hop-on hop-off tour around the city.

Please Note: There are 2 routes with varying tour durations and seasonal schedules. The Park Route (Green Line) takes approximately 2 hours to complete without getting off. The City Route (Blue Line) takes approximately 90 minutes to complete without getting off. The routes run every 30 minutes from May to September, and hourly from October to April. The tours are narrated in English, French, Spanish, German, Japanese, Korean, and Mandarin (available on buses only). First and last tour times will be detailed in your electronic ticket.

Shore Excursion Leaves From
Numerous stops throughout Vancouver. (Full details will be provided in your electronic ticket upon confirmation.)

Restrictions
Guests must be able to walk over paved, gravel, and packed dirt surfaces, some of which are uneven or on an incline. This tour is not wheelchair accessible. Luggage and strollers cannot be accommodated. Baggage storage services are available for cruise guests at Canada Place for an additional fee (not included). For security reasons, short-term baggage storage is available to cruise passengers only. Pets are not permitted onboard the trolley, with the exception of official guide dogs or service animals. Aside from water and baby bottles, food and drink is not allowed.