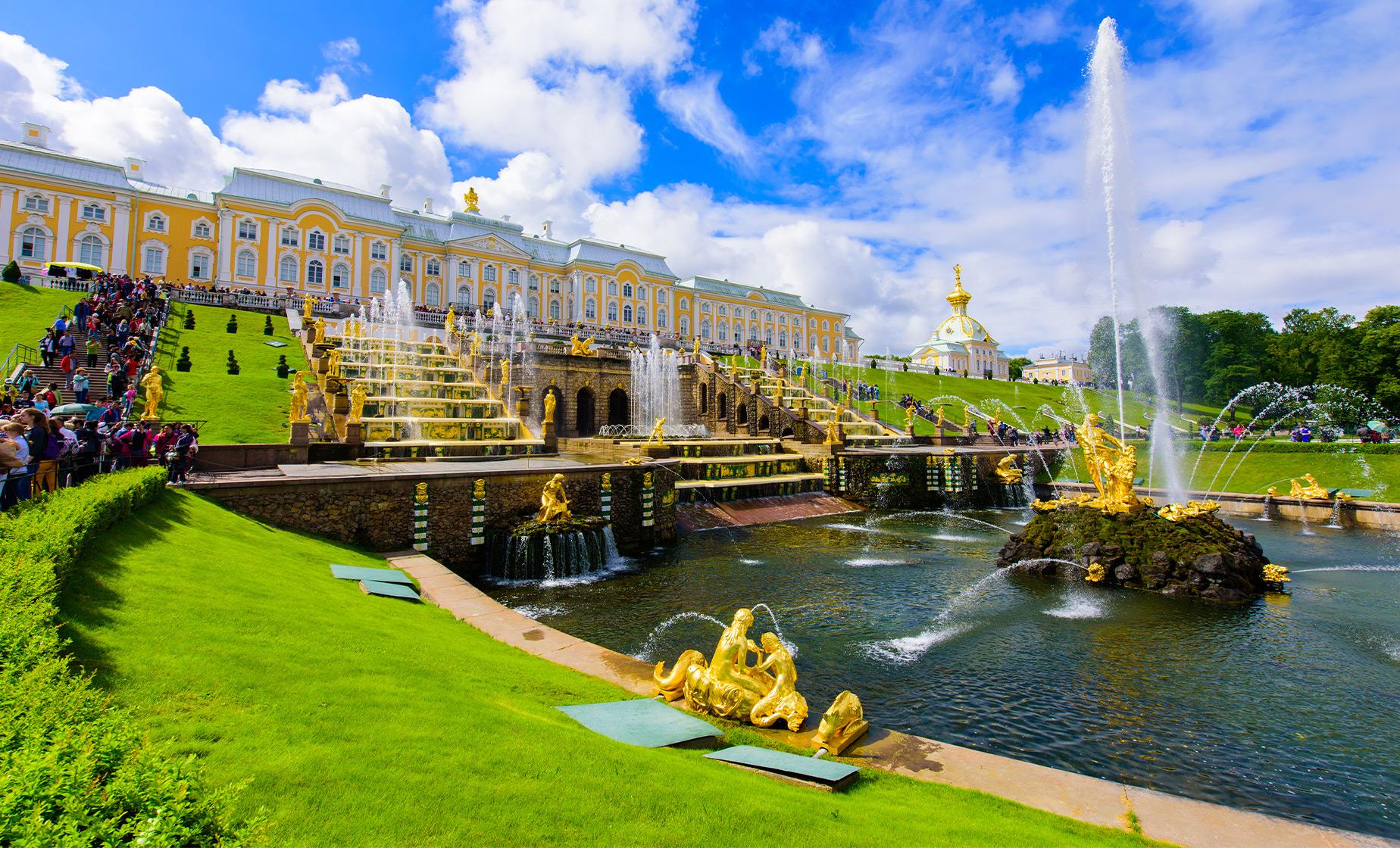 4.9 / 5  |  24 ReviewsReview This Tour
From $309.00/person to $785.00/person (Select "Individuals" below) Price varies based on number of individuals in your group
Choose Options My Cruise Itinerary
Summary
Shore Excursion Size

Cruise Ship Pier
Food/Beverage Provided Lunch on each day is included.
Recommended Dress Comfortable clothing and sensible walking shoes are recommended. Sun glasses and sun screen are suggested.
Restrictions Guests must be able to walk a total of approximately 2 miles each day. Long flights of stairs are required to reach the public rooms in most palaces and the Hermitage. Due to the quick pace, this tour is not suitable for any mobility restricted traveler including slow walkers, or guests who need to sit and rest periodically. Due to administration and immigration restrictions, there will be no refund for programs canceled within 15 days of departure.

On the first day the excursion returns back to the ship at approximately 5:30 PM. On the second day you return one hour before your ship is scheduled to sail. All the sites and destinations listed below will be visited inside, be seen during an exterior photo stop, or seen in passing. Due to museums, palaces or other sites being closed on alternate days throughout the week, the order in which they are visited is not given. Each departure is arranged around these closings so that all sites mentioned are seen as described. You will have the same guide for all days of your St Petersburg tour.

You will enjoy interior visits at:

Catherine's PalaceThe grand Baroque style palace was built for the wife of Peter The Great in the village of Pushkin. It exceeds all the other palaces with its gigantic size, the stunning facade of the palace and its unique decorations extending for almost 1000 feet. You will have a tour of all the rooms open to the public, including the stunning lost Amber Room, and the Great Hall. You will also view a few selected parts of the more than 1,500 acres of park and gardens that surround the palace.

Peter and Paul Fortress Built in 1703, by Peter the Great to protect his new capital, it never saw battle and became a prison for politically harmful people. You will visit the Peter and Paul Cathedral, the traditional, ornate church that houses 18th century paintings, icons and the tombs of many of the Romanov Dynasty Tsars and Tsarinas, including Peter the Great, Catherine the Great, and the last Tsar, Nikolai II, and his family members.

Peterhof Palace You will enjoy an interior visit at Peterhof Palace and also see some of the enormous fountains and gardens. Built to rival Versailles in France, the palace design was drafted by Peter the Great who supervised the design of the palace fountains. After your interior visit, you will look down upon the Grand Cascade, the most famous fountain group, stroll through the lower parks and view and experience some of Peter's surprise creations.

HermitageThe former residential Winter Palace of the Romanov rulers, today houses one of the world's most prestigious museums where the rooms rival the art within them. Your guided tour includes both the Winter Palace and the Hermitage display rooms, which house some of the museum's more than three million art works, including works by DaVinci, Rafael, Rembrandt - to name a few. If nothing else, this is the must see place in St. Petersburg.

Church of the Savior on the Spilled BloodBuilt on the site of the 1881 assassination (spilled blood) of Tsar Alexander II, it sports a fantastic ornate "Russian-style" exterior of traditional colorful onion domes, ceramic tiles and colored glazed bricks. Inside you will view large works of colorful mosaics of different religious themes.

St. Isaac's Cathedral The cathedral's massive central gold dome, one of the largest in the world, is covered with 220 pounds of pure gold and dominates the city skyline. The Cathedral was commissioned in 1818 and took more than three decades to complete. After the October Revolution of 1917 the cathedral was turned into a museum.

Photo stops will be made at the following sites:

The Palace Square between the Winter Palace, the General Headquarters.

Rostral Columns One of the most photographed locations in St. Petersburg.

Please Note: All of our tours in St. Petersburg are operated by authorized guides, and you therefore do not need to secure an independent visa in order to participate in this tour. However, in order to book this tour, you must provide us with full names, dates of birth, nationality, and passport numbers for each tour participant so that our guides can secure the proper tour visas on your behalf. Note also that, if you wish to explore St. Petersburg on your own while not accompanied by one of our guides, you will need to secure an independent visa.

4.9 / 5  |  24 ReviewsReview This Tour
Fabulous- Aug 2019
It was wonderful, our guide Inna was very educated about all the sights, she got us to the front of the lines of people waiting to get in. She was delightful and enjoyable to be with. Everything was on time and ran smoothly. I can't say enough about the 2 day private tour, it is expensive but very well worth it. All 4 of us thoroughly loved our visit to St.Petersburg. I definitely recommend Inna for the days well spent. I have noticed that other tour companies do not include an INTERIOR of Peterhof and that's a must including Catherine's Palace. Barbara/College Station Tx.
Reviewer: Barbara Bobo

2 great days in St Petersburg
Dimitri, our guide, made the difference. He was very knowledgable, friendly, and candid about his country. And he negotiated the long lines at each venue. A bit pricey, but worth it.
Reviewer: Byron Fiman

Family of 8 in St. Petersburg
We had two fantastic days discovering St. Petersburg with our excellent guide Ina! We enjoyed excellent limo service to all our events and the meals were wonderful. Both the food and the venue were a great experience. We got to see so much of St. Petersburg due to the professionalism of our guide. The itinerary was excellent and we came back to the ship with lots of wonderful memories. The itinerary was busy but you will see all the major sites. This was the best choice for our group of 8 running from ages 12 to 85. Highly recommend this excursion.
Reviewer: Christine Brayer Tebbens

A Private tour is a must!
A private tour during your St. Petersburg visit is a must. Well worth the money! Our guide Inna was so knowledgeable and was amazing at making the most of our time in St. Petersburg. When touring as a private small group you get to skip all the long lines! Not just entry lines, but each line that is created within the palaces toured. This perk saves you hours allowing you to visit more sights. Our group of three toured it all!
Reviewer: Lisa Ezratty

Wonderful Tour!
St.Petersburg was amazing, and even better when our wonderful guide got us past the massive lineups quickly and efficiently. Svetlana knew her history, was very proficient in the English language and actually teaches English to adults, so we were able to increase her language base with modern terms and slang! The lunches provided were very tasty and filling, and the restaurants lovely and calming away from the tourist crowds! Well worth paying the extra for a private tour!
Reviewer: Marian Carroll

Best Tour Guide
We were so lucky to get Maria as our tour guide in St. Petersburg! She was very good at keeping our group of 9 on schedule, she was very patient and answered all our questions. We really had a great time visiting all the beautiful sites because of her efficient guiding within the museums and coordination with the driver Alexander (very safe driver) moving around the city. Without a doubt St. Petes was the highlight of our Baltic Cruise due to Maria and Alexander's expertise.
Reviewer: Maria L Collazos