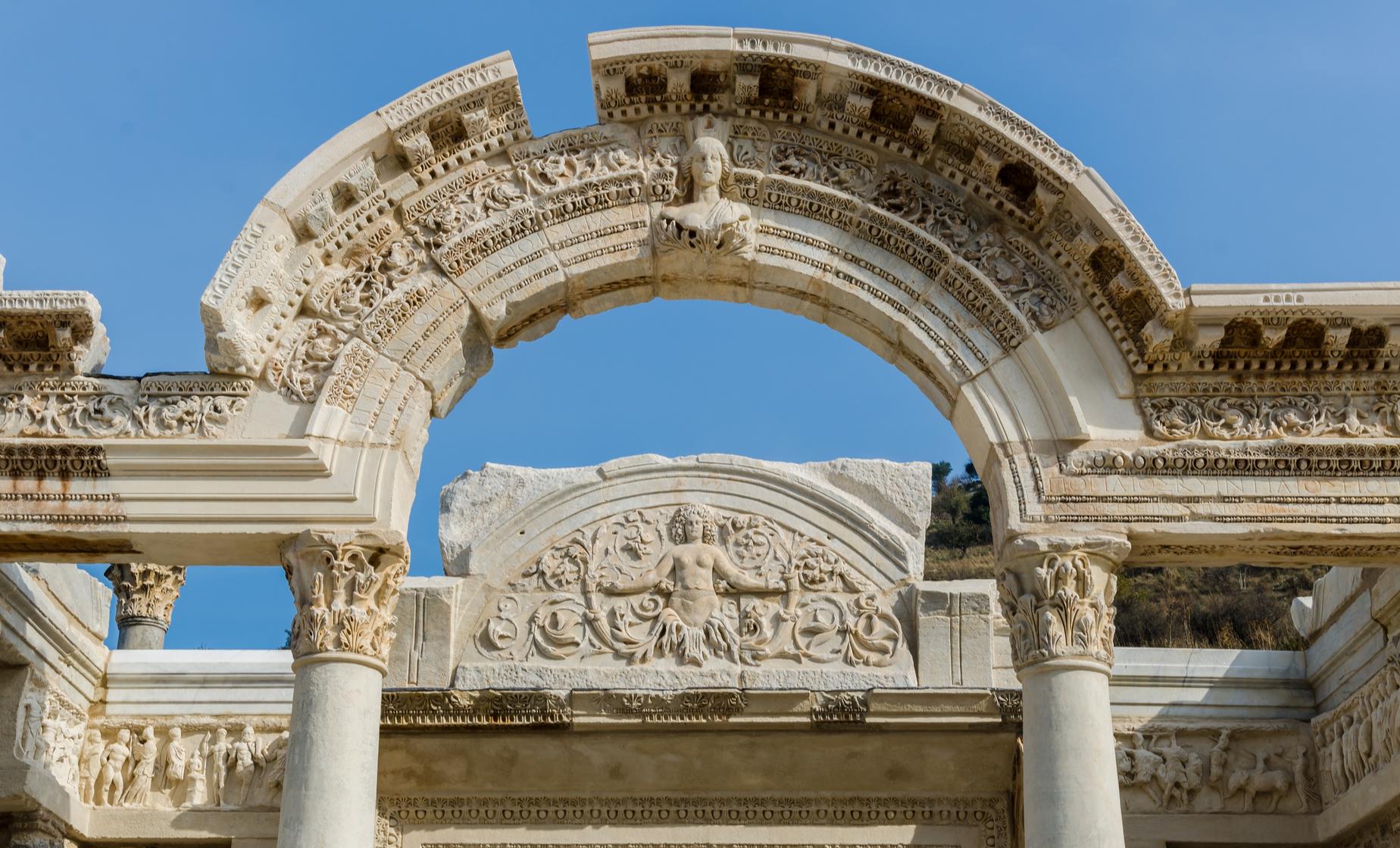 Cruise Ship Pier
Food/Beverage Provided Lunch
Recommended Dress We recommend wearing comfortable clothing and closed toe, sensible walking shoes. Sunglasses and sunscreen are suggested.
Restrictions Walking at Ephesus is over actual streets / sidewalks from ancient times which are uneven and worn. There are steps without hand rails and packed dirt that must be navigated in some areas. To access St John's guests must climb a cobblestone and packed dirt path to reach the site. There are several uneven steps to navigate. The tour is not wheelchair accessible.

Take in a great overview of Ephesus, St. John's, a carpet demonstration/carpet shopping and a lunch of local flavors, all in less than six hours.

Meet your professionally trained exclusive tour guide and set out for Ephesus, 30 minutes from Kusadasi. Famous in antiquity for its Temple of Artemus during the years of the Roman Empire, the Greek port of Ephesus became the greatest city in Asia Minor. You will start your Ephesus excursion at the upper Magnesia Gate and work your way down through the ruins of the city, ending near the ancient Harbor.

Along the way you will see the Forum, the Odeon, the Library of Celsus, the Thermal Baths of Scolastika, and the Great Theater, built in the Greek era and reconstructed in the Roman period. It has played host to programs as varied as Paul and his sermons to the Ephesians, to concerts by Sting, in part due to its remarkable acoustics.

You will walk along the Arcadian Way, where once Mark Antony and Cleopatra rode in procession. You will hear stories of Alexander the Great, the Virgin Mary, and many other famous visitors who walked the same marble streets that you are walking. Approximate time at Ephesus is 1 hour 40 minutes.

Following this visit, reboard your transportation for a very short drive to reach a small rug weaving village close to Ephesus, where you will be given information about this dying work of art as well as time for shopping. This is followed with a lunch of local dishes in the courtyard garden of the carpet center. Turkish salespeople expect you to haggle and quite often you can get 10-15% off the listed price. Treat it as an adventure.

Your last stop will be the Basilica of St. John. It is believed that the evangelist St. John had spent his last years in the region around Ephesus and was buried in the southern slope of Ayosolug Hill. Three hundred years after the death of Saint Paul, a small chapel was constructed over the grave in the 4th century. The church was changed into a marvelous basilica during the region of Emperor Justinian (527-565 A.D.). The monumental basilica, which sat on the highest hill in the area, was in the shape of a cross and was covered with six domes. Its construction, being of stone and brick, is an extremely rare find amongst the architecture of its time. Raised by two steps and covered with marble, the tomb of St. John was under the central dome, once carried by the four columns at the corners.

You will then return to the town of Kusadasi, approximately 30 minutes away.

4.8 / 5  |  22 ReviewsReview This Tour
Ephesus trip
The ride and accommodation to get to the location was safe and while we road the information was helpful with the history. The tickets and access where swift and made getting to the ruins and secondly the church easy. The location was well understood and the history was amazing. The guide was very helpful and kept us moving so that in the time that we had we could see all the best views and locations.. The trip was fun for my family including my 16 year old; we enjoyed seeing where Paul preached and John was entombed.
Reviewer: Quinten Stewart

Casual/Easy walking tour
I was pleasantly surprised that only two us in this tour group as our tour guide had not been given an assignment for 3 months. She was pleasant, timely, and quite knowledgeable. The tour last from 9am to about 3pm, including Ephesus, St. John Church, and carpet demonstration/sales + Turkish lunch. In general, the tour was informative, easy on walking, and very pleasant overall. I was disappointed that she did not take us into the new excavation of Ephesus ""tent city"" and she did not offer us the option to do us as we have plenty of time.
Reviewer: Phil Lowe

Highly Recommended
This was by far the best excursion on the entire cruise. Our guide was phenomenal, giving us important tips along the way. Ephesus was amazing, seeing all the ruins, the public restrooms, and the area where the ""rich"" resided. Thereafter, going to see how they make the handmade carpets and pottery was very informative and enjoyable. The lunch that was provided to us in the courtyard was delicious and exquisite. This excursion was much better than the Classical Rome and Exclusive Athens with free time in Plaka, both of which were garbage and a complete waste of money.
Reviewer: Stuart

greeat personalized tour
We didn't expect it but the tour ended to be just for us, Our guide was very well informed and attentive. We loved the meal. The carpets exhibition was not what I expected because there was little exhibition and more selling, but they were no pushy so I didn't mind (but perhaps they should advice that this part is more for people on the market)
Reviewer: Olivia Kosakoff

It was great to visit these very special sites
We appreciated our guide's historial knowledge which made these visits very interesting.
Reviewer: Gengkis

Great day in Ephesus!
We had an excellent tour guide named ""Kamber Dinek"". It ended up just being a private tour with my husband and I and ""Kam"". Well worth the price, Ephesus was our favorite stop/excursion on our cruise to Greece and Turkey. Very informative in exploring Ancient Ephesus and enjoyed our Turkish lunch.
Reviewer: Natalie