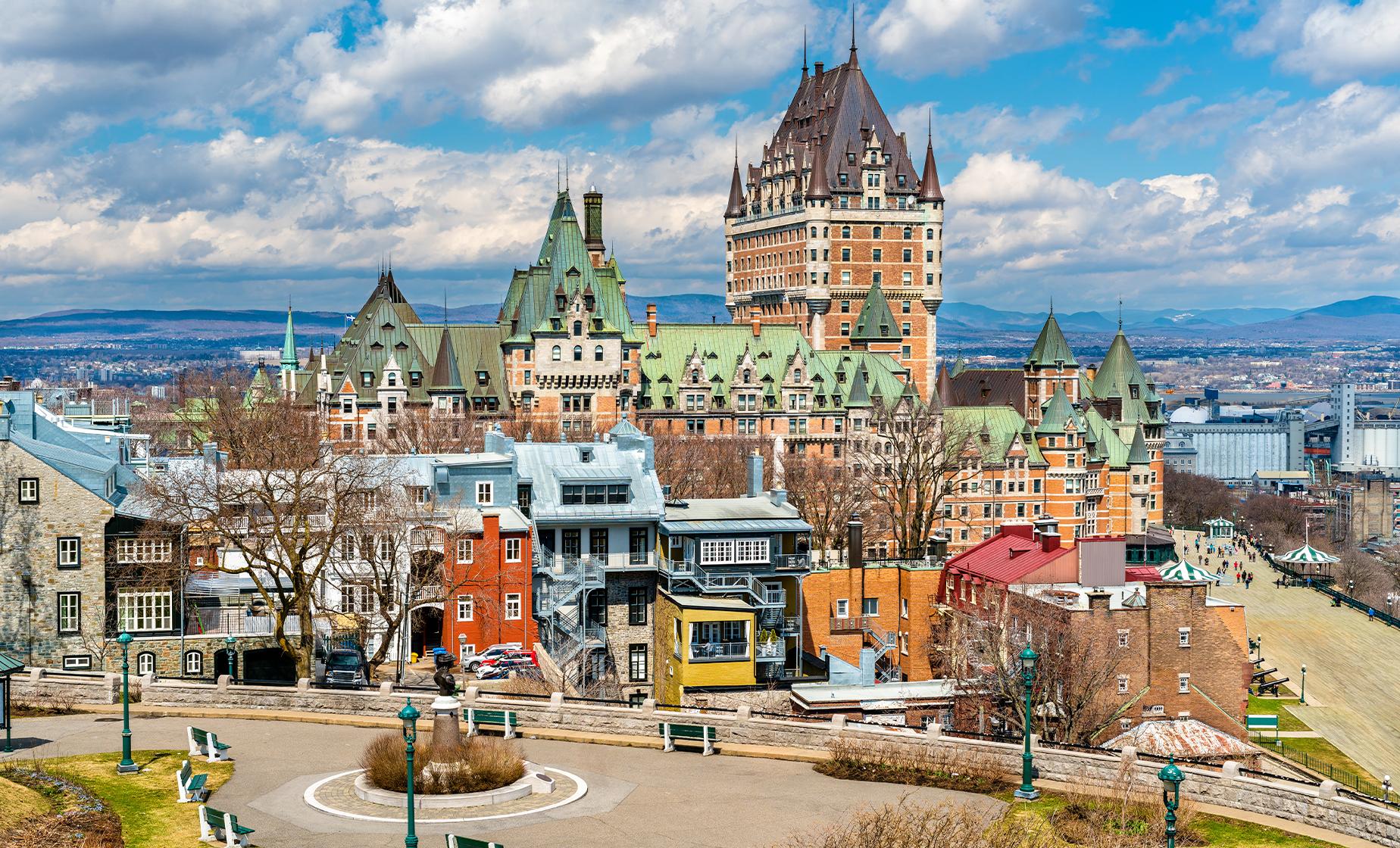 An approximately 10 to 15 minute walk, or an approximately 5 to 10 minute taxi ride (not included, approximately 7 CAD to 15 CAD each way), is required to reach your departure location.
Food/Beverage Provided Not Included
Recommended Dress We recommend wearing comfortable clothing and sensible walking shoes. An extra layer is recommended in case of cool weather.
Restrictions This tour is not wheelchair accessible. Guests must walk over cobblestone, paved, and gravel surfaces. There are steps at several stops.

The City Hall of Quebec City is located in the heart of Old Quebec. The building slopes downward as it was built on a hill and was once home to the Jesuit College (Jesuit Barracks) from the 1730s to 1878. Located on Rue des Jardins and designed by architect Georges-Emile Tanguay, it is the second permanent city hall for the old city.

Place Royale, the nucleus from which Quebec City developed, stands on the site of Quebec's actual foundation, the spot where, in 1608, Samuel de Champlain erected his first "habitation," a farm and storage shed. Named in honor of Louis XIV, whose bust adorns it, Place Royale is the largest surviving ensemble of 17th and 18th-century buildings in North America.

The Citadelle, the French name is used both in English and French, is a military installation and official residence located atop Cap Diamant, adjoining the Plains of Abraham in Quebec City. It has also been an official residence of the Queen in Right of Canada and the Governor General of Canada since 1872, who by tradition resides there for several weeks out of the year.

4.7 / 5  |  70 ReviewsReview This Tour
Quebec City
The bus tour was an excellent way to get an overview of the city with very interesting narration along the way. The tour was priced lower than the ship's tour offering the same itinerary.
Reviewer: Sheryl

Bus tour of old Quebec City
We had a wonderful guide who spoke fluently in English and French and navigated us despite technology difficulties with the loudspeaker. We saw the highlights of the historic city and this enabled us to go back later and walk to the ones we wished to see again.
Reviewer: Margaret j Norman

What a beautiful city!
We truly enjoyed the trip around Quebec City and the narration by the driver. I was amazed that he was able to wrap the bus around all the road construction, which was extensive. The driver was informed, amusing and easy to understand. (Even the digs at Americans were good natured.)
Reviewer: Diana

It was Wednesday, must have been Quebec
A nice overview of the city, both old and "new" with an interesting, well-versed guide. The bus driver was amazing, also, since he was able to squeeze the behemoth of a bus into the tightest of areas. The tour was a bit rushed in some areas, repetitive in others, but that was expected. We wished the bus had larger, more viewable windows since we missed some of the pointed out architectural features because we couldn't crane our necks in contortionist figurations to see well enough. The guide would get ahead of herself..."on your right [and she'd be opposite it] there's such and so..." and by the time our part of the bus got there she was telling about something else. Over-all, it was a great experience. I feel like we have properly been introduced to Quebec to think about visiting it again when we would have more time to explore areas we saw on this tour.
Reviewer: Mary Collins

Good Overview
This whirlwind tour gives you a good overview of places you might want to come back to visit on your own when you have more time. Guide was very knowledgeable and provided some interesting facts and stories about the city.
Reviewer: Steve VandeVen

Walking through Quebec
This was a wonderful tour. Our guide told us so many extremely interesting stories and details about the past and present city of Quebec. It was a lovely fall day and the city was decorated with pumpkins and Halloween decorations which added a festive feeling to the tour. I would definitately recommend this tour to anyone looking for a leisuely walk around town while learning fascinating facts about the city.
Reviewer: Shelley