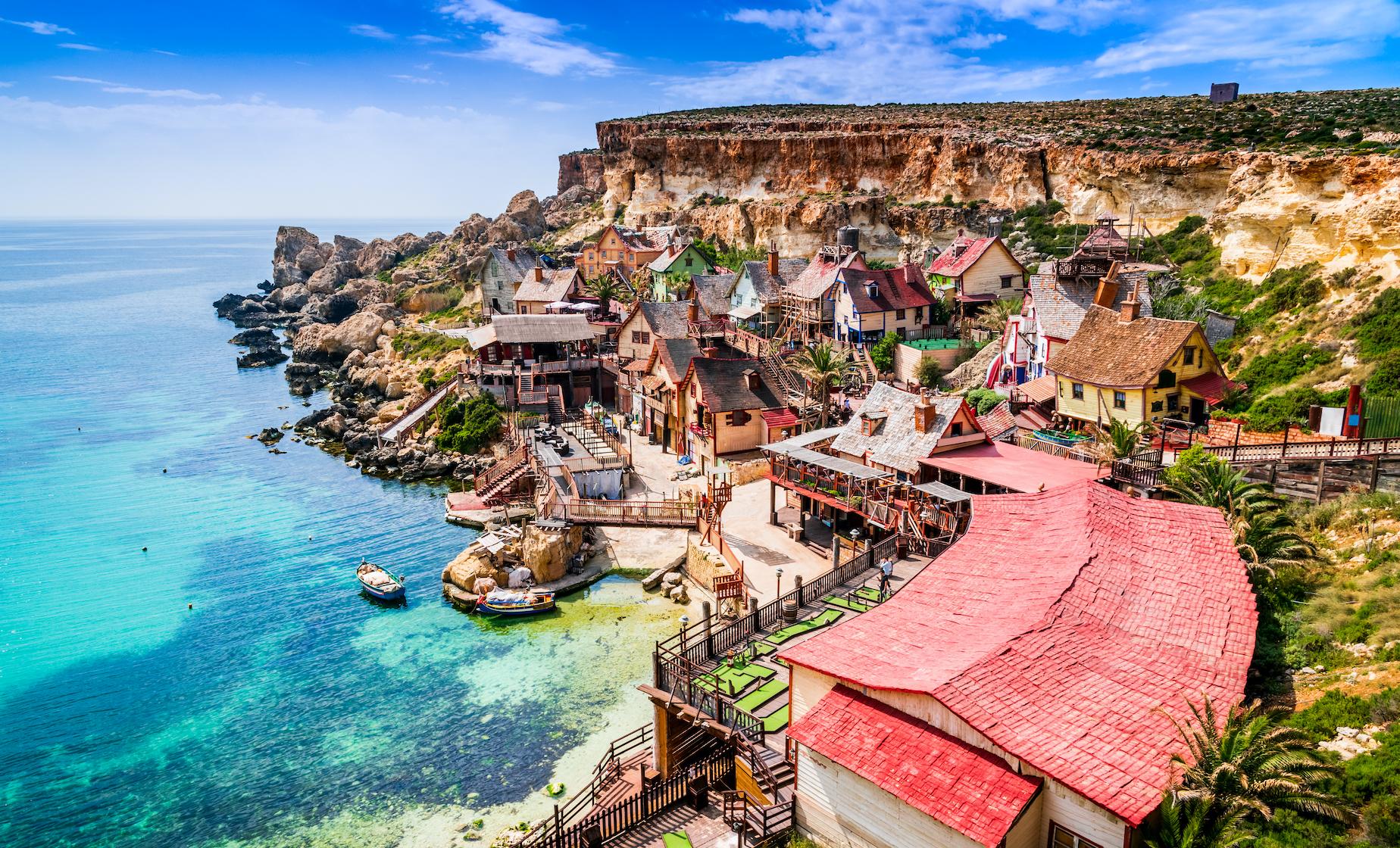 Departing from the port on this Malta Jeep Safari, your chauffeur will lead the Jeep as you explore the island and make photo stops along the way. You will first head to the hilly region of Mizieb in the northern end of the island. Here you will have a chance to see some of the rolling desert-like topography as you travel over the winding roads.

You will then drive to St. Agatha's Tower, built in 1649 for the Knights of Malta. Also known as the Red Tower due to its color, it has a commanding position on the crest of a ridge overlooking the natural harbor, and with clear views over to Comino and Gozo.

You will then travel past Popeye Village, the site of the 1980 film starring Robin Williams, which has been developed into an amusement park.

Then it's time to leave the paved road and go over some of Malta's dirt roads. The ride is bumpy, dusty and fun. You will make your way to Golden Bay, one of the largest beaches on the island, and luckily not overdeveloped. Time will be taken for an optional quick swim to get the dust off and cool down.

From here you travel to Mgarr, a typical rural village situated in an isolated region surrounded by rich farmland and vineyards. You will also see Fomm ir Rih, an area of interesting landscape with vertical cliffs created by a fault line.

Your next stop is to view the silent city of Mdina, a Medieval walled town situated on a hill in the center of the island. Then, a drive through the Mtahleb Valley to see its mixture of wild and very fertile terrain, before stopping for a light lunch.

After lunch you will travel to the Dingli Cliffs on the island's west coast. Here you will have open-sea views over the tiny, uninhabited isle of Filfla from one of the highest points on Malta. Then, on to view the Blue Grotto from the dramatic cliffs above.

You will then begin to drive back towards Valletta. Along the way you will drive through the charming fishing village of Marsaxlokk, famous for its scenic harbor and Sunday market. From here it is approximately 30 minutes back to the port.

Please Note: Every jeep has a soft top that can be open or closed depending on the weather and the guests preference. Besides the chauffeur, each jeep fits up to five additional guests. Guests are not allowed to operate the vehicle. This is not a guided tour; however, a chauffeur for the jeep is included in the tour.

Shore Excursion Leaves From
An approximately 5 to 10 minute walk from the Cruise Pier. (Full details will be provided in your electronic ticket upon confirmation.)

4.5Based On 18 Reviews Review This Tour

Reviewer: Diane Nolly
This tour covers just about everything you could see on Malta outside of Valletta. Very rugged and rough ride so not recommended for those who want a luxury experience!! Guide (Alfred) was very entertaining and accommodating. Lunch was not great. At the end, guide would let you off in Valletta or take you back to the ship. Long day!

Reviewer: Doug Murphy
Two things made this the best tour I have ever taken. First, the driver Alfred Sammut was the most entertaining and fun person to spend the day with. Second, the other couple failed to show so we had a private tour. We saw every thing you could possibly see, had a great lunch, stopped for drinks, and were dropped off in town for shopping. Excellent!

Reviewer: Michael
We had a fun time on this excursion! Our guide, "Popeye" could have been a little more guide -like in sharing information. it was a bit difficult to understand him but he was a delightful fellow. We saw pretty much the whole island except for a few coastal areas. The swim stop was nice as well.

Reviewer: Jane Pratt
This was a great way to see a very large island, as well as the ability to be on "roads" that regular vehicles/buses wouldn't be able to drive on (dirt, rocky, etc.) We were in a Land Rover, and John was an excellent historian and driver. We saw views that regular tours wouldn't have been able to see because of the roads. We made stops for a quick dip in a local beach, the original Popeye movie filming location (now a local attraction), a fishing village, local lunch, off-site silver jewelry and glass blowing shop/factories (lower prices than in town). It was an excellent tour and we enjoyed it very much - especially that there were only 6 of us instead of a bus full of people! Definitely recommend it for a full view of the island.

Reviewer: Jim S Allen
The views from above were great. We also went to an old village high in the hills to see where a village lived not too long ago. The vehicles were very comfortable.