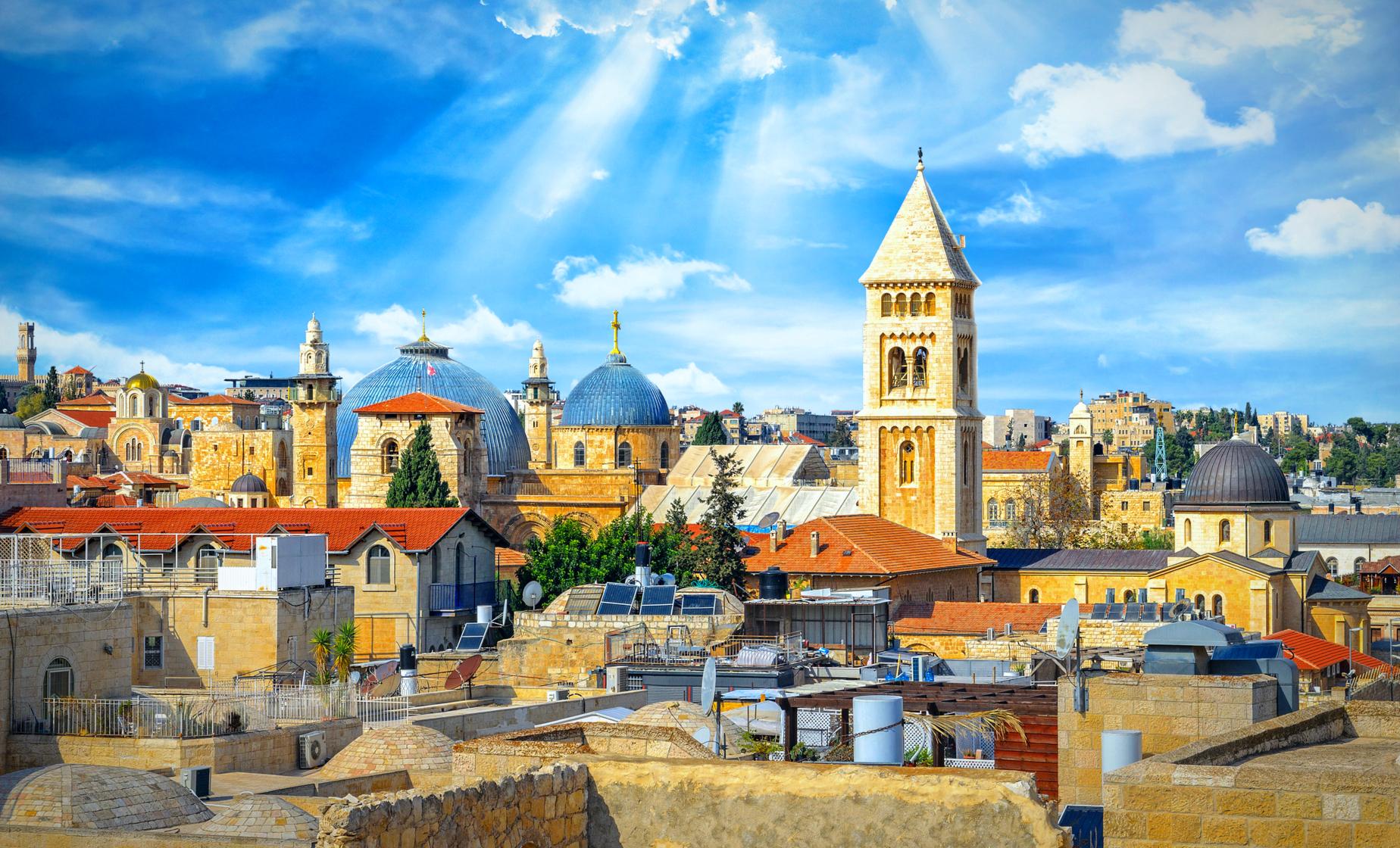 5.0 / 5  |  5 ReviewsReview This Tour
From $90.00/person to $925.00/person (Select "Individuals" below) Price varies based on number of individuals in your group
Vehicles available for this tour accommodate groups of up to 45 guests maximum. Groups with more than 25 guests may be accommodated upon request. Please take this information into consideration when booking.
Choose Options My Cruise Itinerary
Summary
Shore Excursion Size

Cruise Ship Pier
Food/Beverage Provided None
Recommended Dress As you will be visiting religious or memorial sites, head, shoulders and knees must be covered. Comfortable, sensible walking shoes, sun glasses and sun screen are recommended.
Restrictions There is approximately 2 hours of walking, some of it with steep steps to negotiate in churches; therefore, it is not recommended for those guests with mobility concerns.

After meeting your professional guide on the pier in Ashdod, you will set out on the one hour drive to Jerusalem and some of the most sacred sites in the Holy Land. Upon arrival in Jerusalem, a photo stop will be made from atop the Mt. of Olives.

Nearby, you will visit the Church of All Nations, also known as the Church or Basilica of the Agony. It is a Roman Catholic Church that was consecrated in 1924 and is decorated with mosaic symbols of the countries that contributed to its construction. The alter enshrines a section of bedrock, The Rock of Agony, where Jesus is said to have prayed before his arrest. The current church rests on the foundations of two earlier ones, a 12th century chapel, and a 4th century basilica. This is followed by a visit to the Gardens of Gethsemane, located below the church at the foot of the Mount of Olives. It is here where Jesus prayed and his disciples slept the night before his betrayal and arrest. According to the Eastern Orthodox Church tradition, Gethsemane is the garden where Virgin Mary died before her assumption on Mount Sion. Time will be taken for lunch on your own.

After lunch, you will begin a walking tour of the Old City. The UNESCO world heritage site is a walled area within the modern city of Jerusalem. Until the 1860s this was the entire city of Jerusalem. It is home to several sites of religious importance: the Temple Mount and its Western Wall for Jews, the Church of the Holy Sepulchre for Christians, and the Dome of the Rock and al-Aqsa Mosque for Muslims. The current walls date back to the 1500s and there are 11 gates in the Old City, although only 7 are currently open. As you walk through the Arab market, a maze of narrow alleys mostly within the Muslim Quarter, you will see a fascinating variety of shops and stalls offering everything, from mixed nuts and spices, to different kinds of sweets and pastries, vegetables and falafel, along with souvenirs, ceramics and oriental jewels and cloths. Follow your guide as you make your way to the Christian Quarter where you will walk uphill along a portion of the Via Dolorosa, (the Way of Grief or Way of Suffering.) It has been traditionally held to be the path that Jesus walked, carrying his cross, on the way to his crucifixion. It is currently marked by nine Stations of the Cross (halting place) that represent series of events that happened in Jesus' life from the time he is condemned to death through the third time he falls. At the top of the street is the Church of the Holy Sepulchre, (Church of the Resurrection) which is believed by most Christians to sit on the Hill of Calvary (Golgotha,) where the New Testament says that Jesus was crucified, and is said to also contain the place where Jesus was buried (the sepulchre) and resurrected. The remaining five Stations of the Cross are inside the church. From a high spot, you will be able to see the Dome of the Rock on the opposite side of the Old City.

You will them walk with your guide to the Jewish Quarter where a stop will be made to see the Western Wall. Part of the supporting wall of the Temple Mount that has not been hidden by construction, the Western Wall has remained intact since the destruction of the Second Jerusalem Temple in 70 A.D. The Second Temple having been built in 517 B.C. to replace the First Temple conceived by King David and constructed by King Solomon in 950 B. C. It became the most sacred spot in Jewish religious and national consciousness and tradition by virtue of its proximity to the Western Wall of the Holy of Holies in the Temple, from which, according to numerous sources, the Divine Presence never departed. It became a center of mourning over the destruction of the Temple and Israel's exile, and a place of communion for the memory of Israel's former glory and the hope for its restoration. From here, you will return to your transportation outside the Old City.

You will drive from Jerusalem to the town of Bethlehem, a trip made by the magi (Wise men) many years ago. The town is inhabited by one of the oldest Christian communities in the world, though the size of the community has shrunk in recent years due to emigration. The city is also the birthplace of David and the location where he was crowned as the king of Israel. The tomb of the Biblical Matriarch Rachel, wife of Jacob, is located to the north of Bethlehem.

While in Bethlehem, you will visit the Church of the Nativity, which is one of the oldest continuously operating churches in the world. The structure is built over the cave that tradition marks as the birthplace of Jesus of Nazareth, and it is considered sacred by followers of both Christianity and Islam. The current basilica was rebuilt in 565 A. D. by the orders of Emperor Justinian I. The compound surrounding it has been expanded over the years. It is administered jointly by Greek Orthodox, Roman Catholic, and Armenian Apostolic authorities. The structure is actually a combination of two churches, with the Grotto of the Nativity, where Jesus is said to have been born, underneath. As wait times to enter the grotto can be more than 3 hours long, a visit to the grotto is not included in this tour. After the visit, you will return to Ashdod.

Please Note: Vehicles available for this tour accommodate groups of up to 45 guests maximum. Groups with more than 25 guests may be accommodated upon request. Please take this information into consideration when booking. Due to traffic or crowds at the sites, the tour itinerary may be altered in an attempt to avoid foreseen delays. All sites mentioned in the tour will be visited and crowds are to be expected. Tour times are approximate due to crowds and traffic.

Bethlehem is part of the Palestinian Authority. Our guides in Israel, who are Israelis, are not allowed to escort tourists into Bethlehem. For the Bethlehem portion of your tour, you will have a local Palestinian guide to escort you. The cost of this guide is included. If traveling in any vehicle smaller than a coach, you will also need to change vehicles for the Bethlehem portion of the tour. A mandatory stop at a gift shop in the Palestinian Authority area is required as part of this visit. Purchasing is not required.

5.0 / 5  |  5 ReviewsReview This Tour
Antiguan Experience
This was absolutely the best tour I had ever taken and my wife and I have taken thousands of tours in our life time. If you are visiting Ashdod Israel this tour is a MUST SEE . Our two drivers were very knowledgeable ,courteous and was able to work with our group in seeing some places that were not on the schedule.
Reviewer: John F Kasper

Antiguan Experience
A must see tour if you are in Ashdod Israel.
Reviewer: John F Kasper

Supurb
Saw everything. Exhausting but worth it
Reviewer: JAMES MARKUSEN

three day tour of the Holy Land
This three day tour of the Holy Land was fantastic, a trip of a lifetime, thank you! Our tour guide Avi Shahar was amazing, he knew exactly where to take us to, very knowledgeable. He did a splendid job of re-living, unfolding biblical history before our eyes, what an experience that was! I have no words to describe the feeling. Avi also knew where to take us for lunch, for authentic cuisine of the place and good food. He also provided us with WIFI; we were able to connect with our families and friends and shared beautiful moments as Avi drove and we sat comfortably in his van. As a bonus he took us to the peak in Haifa and let us enjoy the view below - the beautiful Haifa port. Thank you Avi! We highly recommend Avi's services to friends and people we know. Thank you!
Reviewer: Faye Lapaz

Private Jerusalem &Bethlehem
We had a very good experience with our guide and the places he took us! He was very knowledgeable and friendly! I’m glad we purchased from shore excursion group!
Reviewer: Carmelita Grasso