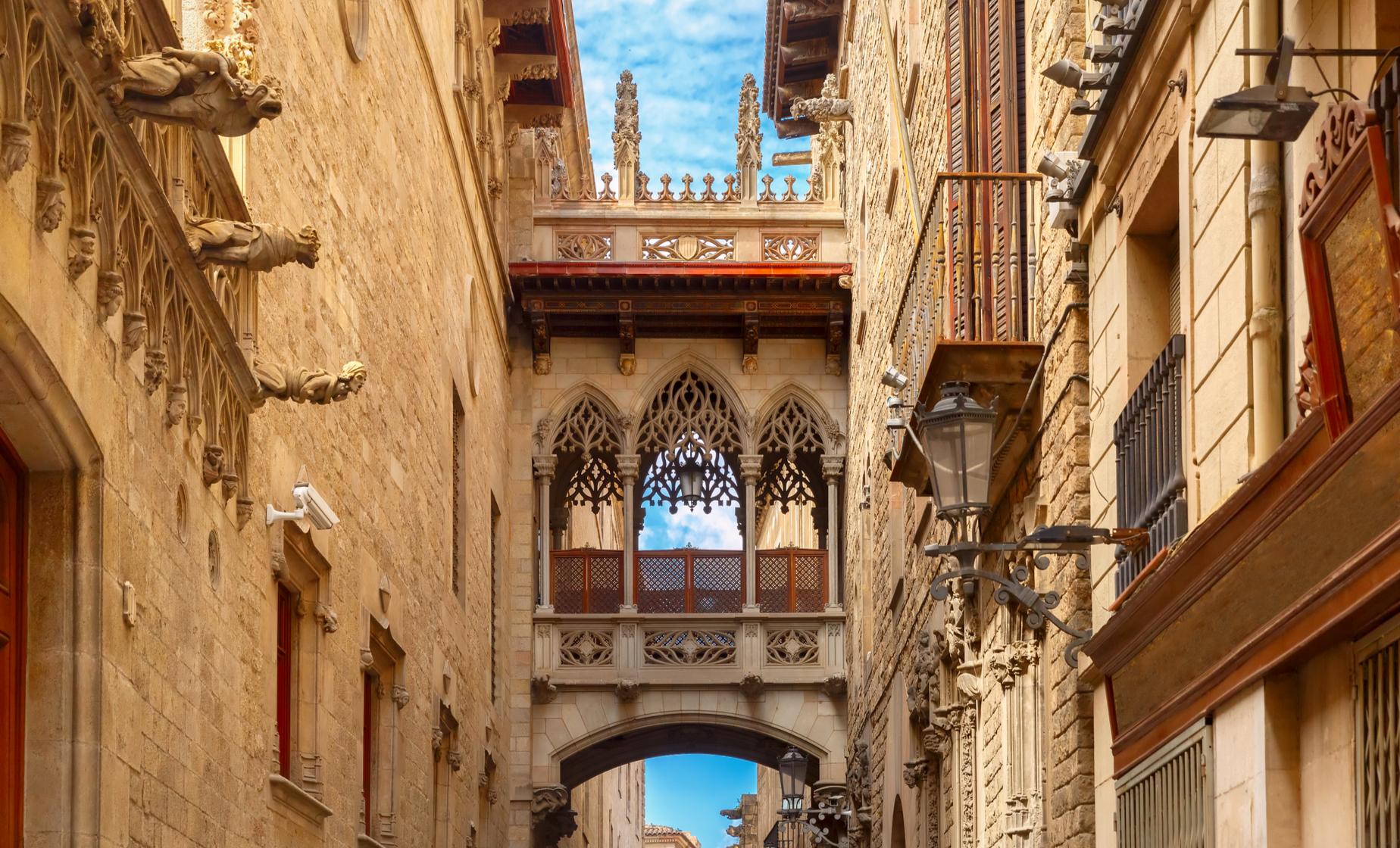 Review This Tour
Price: $150.00
Choose Options My Cruise Itinerary
Summary
Shore Excursion SizeSmall
Shore Excursion TypeCultural, Scenic, Walking
Shore Excursion Duration7 Hours
Activity LevelModerate
Shore Excursion Leaves FromNext to "Picasso" Bar, 422 Carrer de Mallorca, 08013 Barcelona. (Full details will be provided in your electronic ticket upon confirmation.)
Food/Beverage ProvidedNot Included
Recommended DressWe recommend wearing comfortable clothing and sensible, flat-soled walking shoes. Sunglasses and sunscreen are suggested. As you will be visiting a religious or memorial site, shoulders and knees must be covered.
RestrictionsThis tour takes place in historical areas and, therefore, is not wheelchair or stroller accessible, nor is it recommended for guests with mobility issues. There will be a security check before entering the Sagrada Familia. The rooftop terrace of Casa Mila might be inaccessible during heavy rain.

From the narrow streets of the Barrio Gotico to the airy splendor of the Sagrada Familia, on this tour, you will cover more of the city than you could imagine. If you don't have much time but want to get an insider's view of the city, this is the perfect experience for you.

Your day begins on the steps of the Sagrada Familia where you'll meet your expert tour guide. Before you go inside you'll be able to snap a few pictures with views of the church; then you'll take a stroll around to see the various facades and learn why they look so different. As you tour the inside, your guide will tell you about Gaudi's extraordinary life story and point out the elements and details that will give you a deeper insight into his genius mind.

After a full tour of the sanctuary, including a peek into Gaudi's crypt, you'll also step into the museum to learn precisely how Gaudi planned this puzzle-box of a building and why his methods were genuinely groundbreaking. Aside from the Sagrada Família, the houses that Gaudi designed in the late 20th century are his most beloved work in Barcelona.

For the next part of your tour, you'll hop on a subway to get across town. En route, your guide will give you plenty of tips on how to use public transportation in the city and how to get around.

Back above ground, you'll step out onto the Passeig de Gracia, which has the highest concentration of Art Nouveau architecture in Europe. Here you'll see The Casa Batllo, the Casa Amatller, and the Casa Lleo Morera. These are three of the most unique buildings in the world, created for wealthy families who were all trying to outdo each other. Anyone can appreciate their almost alien beauty, but seeing them with a guide makes the experience more profound. As you study their facades your guide will point out the very Gaudi type details that you might miss and help you understand what makes each structure so unique.

All of this will help you put your next stop, the Casa Mila / La Pedrera, in perspective as you take a full tour of its stunning interior. Originally designed as an apartment building for the great and the good of Barcelona, the Casa Mila was ridiculed when it was first unveiled and given the nickname is still carries today: "The Stone Quarry" (La Pedrera). The facade may have been ahead of its time, but the interiors were always the toast of the town. As you move through the organic, undulating rooms (try to find a right angle) which still contain original furniture, you'll get a feel for what it was like living in a space designed by one of the greatest architects to ever live.

After you've had your fill of Gaudi, you'll break at Barcelona's iconic pedestrian street, La Rambla for lunch. Although food is not included, your guide will provide you with recommendations on where to eat at any price point and taste.

In the afternoon, you'll reconvene in Barcelona's Gothic Quarter for a stroll through the history of the city. You will pass Roman walls that date back thousands of years, and you'll learn how this city went from a rural fishing village to the heart of an entire region unified by a very hairy king. You'll also step inside the Barcelona Cathedral to enjoy a bit of gothic architecture before using a special access ticket to get up onto the roof for lovely panoramic views. Back at street level, you'll explore some of the most beloved areas of the city center, like Gaudi's favorite square. You'll also learn about Barcelona's old Jewish community, the dark history of the Spanish Inquisition, and the Spanish Civil war as you visit spots like the Old Jewish Quarter, the Portal de Sant Lu, Sant Felip Neri Square, and the Placa St Jaume.

As a special treat, you will pass local shops selling trinkets you won't find anywhere else in the world. From there, your stroll will take you into the city's favorite market, La Boqueria. Here you'll explore the stalls overflowing with local meats, cheeses, and other products and you'll learn what's in season during your visit, and why Catalonia is considered one of the most fertile regions in Spain.

Now that you've seen Barcelona in a day, the rest of the city is at your fingertips.

Recommended Dress
We recommend wearing comfortable clothing and sensible, flat-soled walking shoes. Sunglasses and sunscreen are suggested. As you will be visiting a religious or memorial site, shoulders and knees must be covered.

Restrictions
This tour takes place in historical areas and, therefore, is not wheelchair or stroller accessible, nor is it recommended for guests with mobility issues. There will be a security check before entering the Sagrada Familia. The rooftop terrace of Casa Mila might be inaccessible during heavy rain.