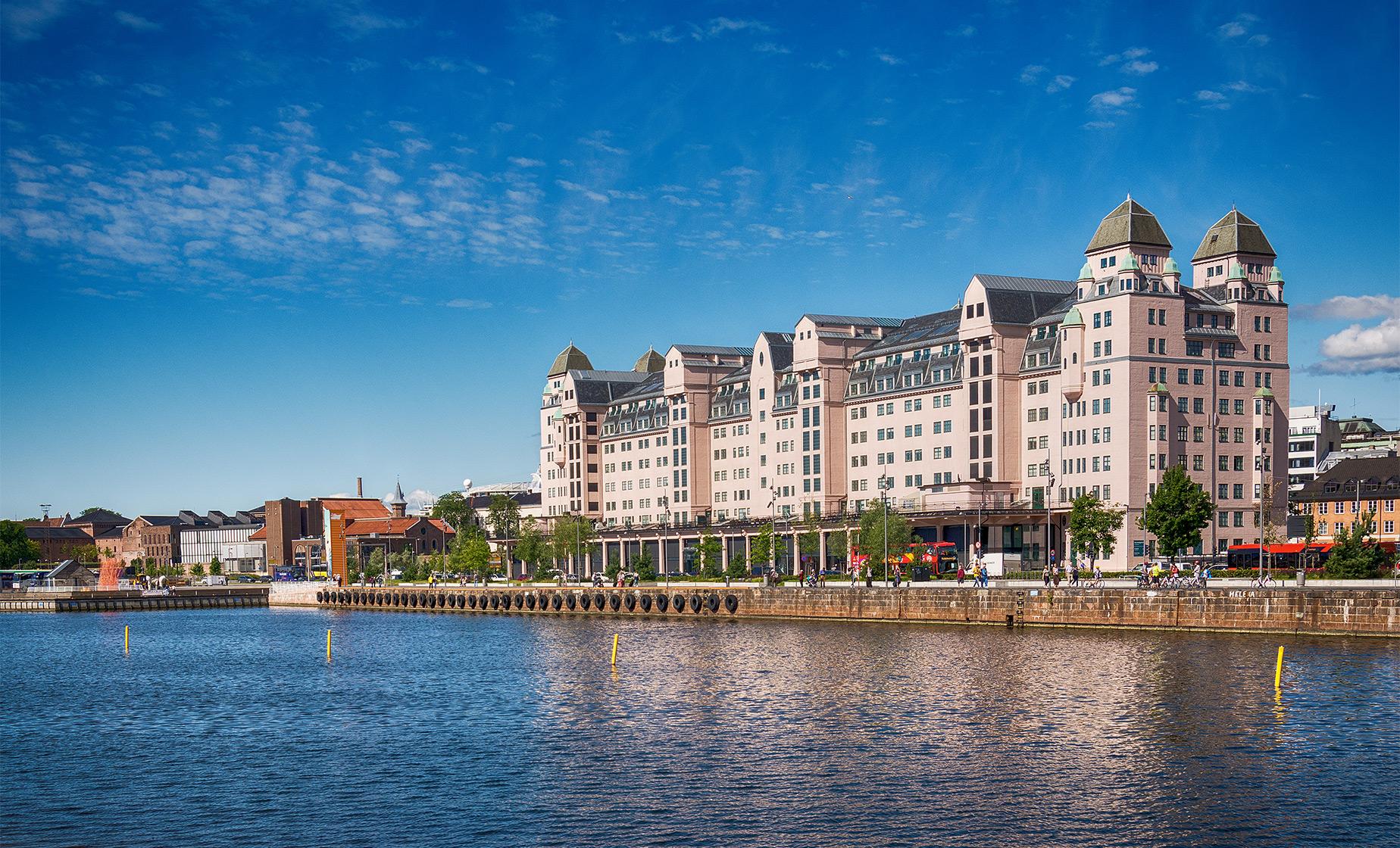 A 10 - 20 minute walk from the cruise pier, depending on the pier.
Food/Beverage Provided Not Included
Recommended Dress We recommend wearing comfortable clothing and sensible walking shoes. Some guests may appreciate a scarf or light jacket while on the water, and sunglasses and sunscreen are also suggested.
Restrictions Guests must be able to walk on paved, gravel, and cobblestone surfaces, some of which are uneven, at the stops. There are some stairs at several sites.

Come aboard Oslo's answer to the hop-on hop-off bus, a city tour on a traditional wooden sailing ship making stops at five locations around the harbor.

From the stop adjacent to the Opera House, you will pass the berth of the Royal Yacht, the ferry harbor, several piers used for cruise ships, and Norway's first concrete building, which was built in 1916. The Opera House, built in 2008, makes a striking modern statement against some of Oslo's historic buildings.

At City Hall, you are within walking distance of the Nobel Peace Center, located in an old train station from 1877, the City Hall building, the Akershus Castle dating back to 1299 AD, and the Aker Brygge area, which was once an 1800's shipyard and is now a shopping and entertainment area.

As you sail from one stop to the next, you will pass by Ekeberg restaurant, a popular eatery since 1927 and a former maritime school, perched on a hill. You wind down to Hovedoya Island, where you can see ruins dating back to the 1100's and several small islands, such as Lindoya and Nakholmen, which are dotted with cottages.

Museum Island is a major destination in Oslo, and home to six different museums. The Viking Ship museum houses genuine preserved ships used by the Norwegian Vikings in the 9th century. The Norsk Folkemuseum consists of a collection of more than 150 buildings from various parts of Norway, among them a 13th-century stave church. The Kon-Tiki Museum displays objects from Thor Heyerdahl's world-famous expeditions, including The Kon-Tiki raft, the reed boat Ra II, and Easter Island statues. The jewel of the Polar Ship Fram Museum's collection is the famous ship built in 1892 and used by Nansen, Sverdrup, and Amundsen on their polar expeditions to the North and South Pole. Brush up on your maritime history at the Norwegian Maritime Museum. At the Holocaust Center, learn the fate of the Norwegian Jews during the Second World War.

Please Note: Each cruise section lasts approximately 15 minutes, including loading time. It takes approximately 1 hour and 30 minutes to complete a full circuit. All departure times are from the Opera House stop. Each stop is 15 minutes after the previous stop. A full list of departure times will be provided in your electronic ticket. As guests can stay at each stop as long as they wish, it is the responsibility of the guest to make sure they return to their ship in time for sailing. Guests who do not plan accordingly will not be entitled to compensation.

The minicruise includes the following stops:

4.0 / 5  |  3 ReviewsReview This Tour
Good Tour
Good walk to the pier where I had to board the boat. Did not arrive on time, which was good for me because I would have misses otherwise. Beautiful tour, one thing, one of the stops was next to my cruise ship. I just got off, didn't want to do that walk again. It was more than 20 minutes
Reviewer: Vanessa Gayden

Qslo minicruise
All went well for us on this tour. We enjoyed the sailboat ride around the Oslo harbor with the picture map. We got off had museum island and took a nice tour of the Con Tiki museum.
Reviewer: Sherry Unmack

Interesting 99-year-old sailing vessel
The tour we took was on an old sailing ship built in 1917. It has been retrofitted with a motor and is a reliable and interesting vessel. We thought it would be a good way to get to the Viking Ship Museum. When we got to that stop, however, we needed to walk another 20 minutes or so. The Hop-On-Hop-Off Bus was driving right past it as we arrived. Since we didn't want a long wait for the next Tour boat we had to cut our visit short, running the last ten minutes to get to the dock on time to catch the cruise. The young man working the deck was very considerate and helpful. I think they even delayed pulling out of dock because I'd talked to him about catching the next boat. It's a pleasant cruise around the harbor on a nice day but probably not the best way to get around Oslo if you wanted to get to various destinations.
Reviewer: Linda Olson