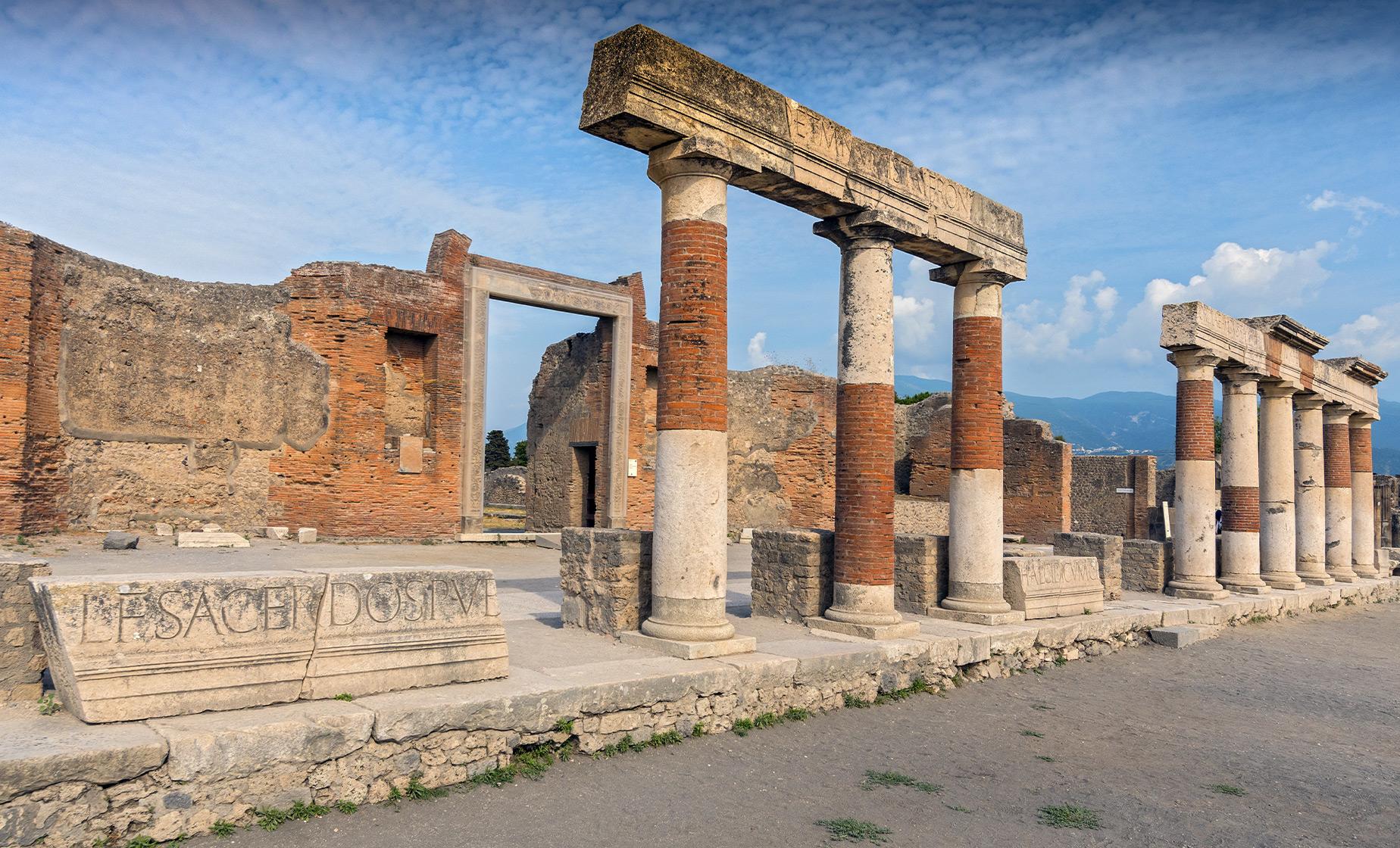 This tour has been specifically designed to allow you to view one of the world's most amazing archeological excavation sites and then drive to the top of Mt. Vesuvius and see firsthand what lead to Pompeii's demise. Accompanied by your guide, you will be provided detailed explanations while visiting both sites.

Begin your tour as your driver will take you to one of the most fascinating and vast archaeological sites which is in southern Italy's Campania region. Once a thriving and sophisticated Roman city, Pompeii was buried in meters of ash and pumice after the catastrophic eruption of Mount Vesuvius in 79 A.D. Near the coast of the Bay of Naples, this well-preserved site features excavated ruins that you can explore. Ever since the ancient Greeks settled in the area in the 8th century B.C., the region around Mount Vesuvius and the Bay of Naples attracted wealthy vacationers who wanted to soak up the sun and the scenery. By the turn of the first century A.D., the town of Pompeii, located about five miles from the mountain, was a flourishing resort for Rome's most distinguished citizens. Elegant houses and elaborate villas lined the paved streets. Tourists, townspeople and slaves bustled in and out of small factories and artisans' shops, taverns and cafes, and brothels and bathhouses. People gathered in the 20,000-seat arena and lounged in the open-air squares and marketplaces. On the eve of that fateful eruption in 79 A.D., scholars estimate that there were about 20,000 people living in Pompeii and the surrounding region. Your guide will explain and point out many interesting facts while you explore the grounds. When a group of explorers rediscovered the site in 1748, they were surprised to find that, underneath a thick layer of dust and debris, Pompeii was mostly intact. The buildings, artifacts and skeletons left behind in the buried city have taught us a great deal about everyday life in the ancient world.

Have free time for shopping and to take a break for your lunch (at your own expense) before you next journey to Mt. Vesuvius.

Once you have arrived at the mountain you will be provided with detailed explanation of the area from a professional vulcanological guide. Mount Vesuvius, near the Bay of Naples, is hundreds of thousands of years old and has erupted more than 50 times. Its most famous eruption took place in the year 79 A.D., when the volcano buried the ancient Roman city of Pompeii under a thick carpet of volcanic ash. Walk to the top of the crater and gaze out over the terrain as you contemplate the power of this beast.

Your driver will then take you back to the pier area and your ship.

Please Note: Admission to Pompeii and Mt. Vesuvius is not included. The price of admission to Pompeii is 13 EUR per person. The price of admission for Mt. Vesuvius is 13 EUR per person. A valid ID must be shown to gain free entrance for those under 18 years of age at the Pompeii site. Your guide will collect the ticket fee for entrance to Pompeii while on the journey, once there the guide will purchase all tickets from a dedicated counter and you will be provided with skip the line service.

Restrictions
Guests should be in good physical condition. You may encounter uneven and unpaved surfaces. This tour is not wheelchair accessible.

Admission to Pompeii and Mt. Vesuvius is not included. The price of admission to Pompeii is 13 EUR per person. The price of admission for Mt. Vesuvius is 13 EUR per person. A valid ID must be shown to gain free entrance for those under 18 years of age at the Pompeii site. Your guide will collect the ticket fee for entrance to Pompeii while on the journey, once there the guide will purchase all tickets from a dedicated counter and you will be provided with skip the line service.

5Based On 13 Reviews Review This Tour

Reviewer: Renata Hannila
A good tour except for the very beginning. The bus had to stop to pick up ONE passenger who never showed up and after a half hour wait (apparently company policy) we finally got going. Can’t help but feel that we were short changed that half hour during our tour of Pompeii. Our guide was excellent but was rushed to complete our tour on time. Lunch was a great break and we had enough time to hike up Mt. Vesuvius. Our tour got back to the ship at the time stated.

Reviewer: Sean
Pompeii was much bigger and more impressive than I imagined. Be prepared to hike up a steep incline on the mountain and breathtaking views (don't wear sandals and know it can take more than 20 minutes to get to the top).

Reviewer: Åsgeir Nord
We had a great day in Naples, when the entire familiy participated in this excursion. The logistics were flawless, and our guide in Pompeii was very knowledgeable.

Reviewer: Sara C Oakes
Fantastic! Our guide for Pompeii was phenomenal, well-spoken and informed. Our guide for Mt. Vesuvius was great - even though we did not see the mountain/volcano/crater at all because of thick low-lying fog, we enjoyed our day and the pizza lunch was terrific!