From $185.00/person to $675.00/person (Select "Individuals" below) Price varies based on number of individuals in your group
Tour does not operate on Tuesdays and Fridays 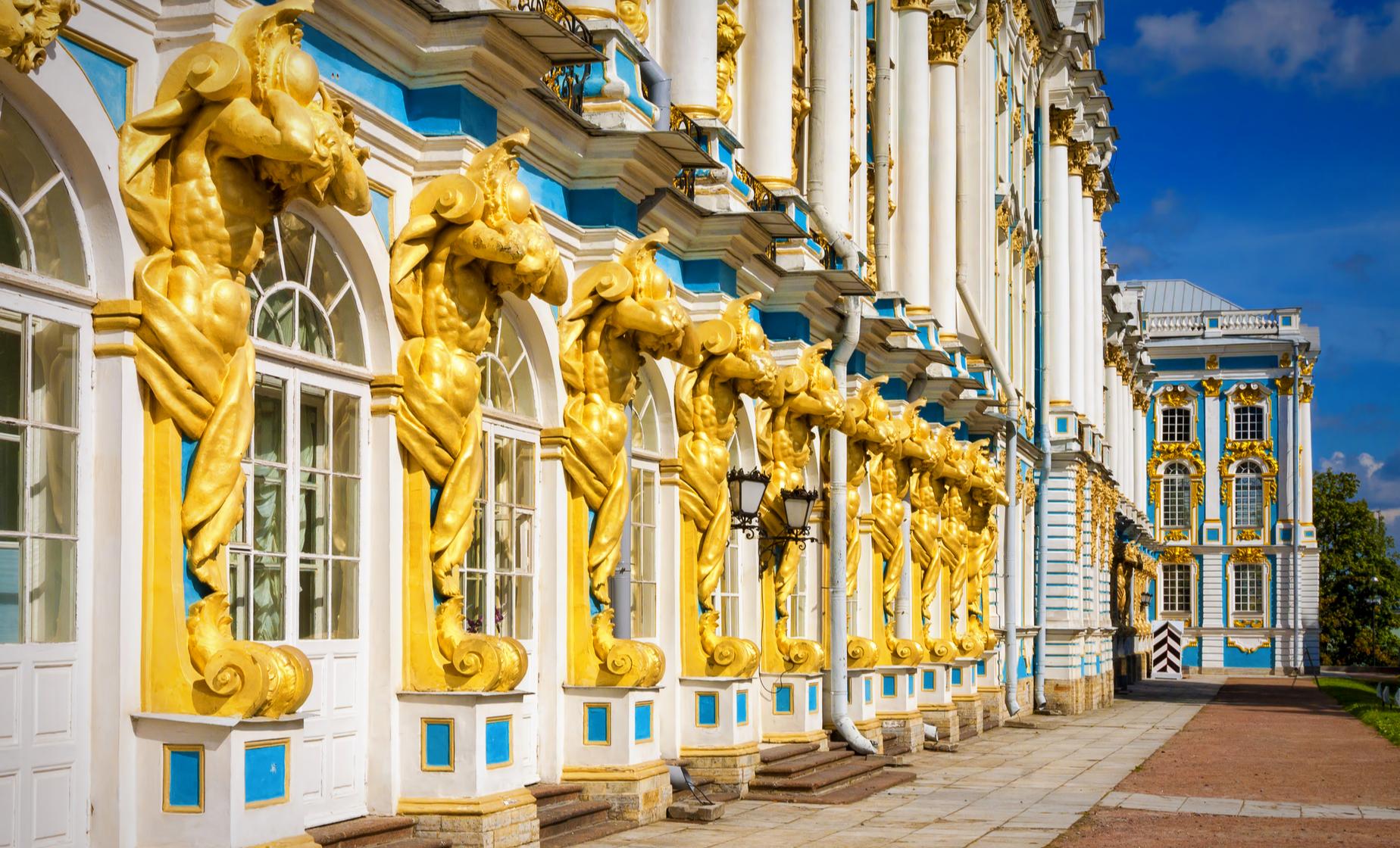 Russians are reputable for their flamboyant design tastes. On this St. Petersburg excursion, you're afforded the opportunity to see the origins of the nation's grand architecture and furnishings. First, you'll embark on a pleasant drive through the countryside to Pushkin, encountering the Catherine Palace and Parks. Book this St. Petersburg tour for a stunning look into marvelous Russian scenery.

Originated in 1717 by Catherine I, the grand summer palace seen today was redesigned in the ornate Rococo style by Empress Elizabeth in 1733.

The new facade designed by Bartolomeo Rastrelli used more than 100 kilograms of gold to gild the sophisticated structure. The palace is best known for what is inside. Its large suites and formal rooms, known as Golden Enfilades, are spectacularly grand.

The residence invites the curious to appreciate the gigantic white-marble Grand Staircase, as well as the Great Hall-an astonishing baroque room of gilt-carved wood and mirrors.

Then there's the regal Amber Room, which was famously looted by the Nazis. Recently, Russian craftsmen have piece-by-piece reconstructed the dazzling panels of semi-precious stones.

Heading to the Pavlovsk, you'll have authentic Russian restaurant food. It's common for traditional Russian musicians to play while you dine. Upon recharging, you're off to the Palace of Paul, the next palatial gem in Pavlovsk.

In 1777, Catherine II allotted 2,471 acres to her son and heir, Paul I, to commemorate the birth of his son, Alexander I. As you may note, English architect Charles Cameron, borrowing from his native Palladian design influences, gave the palace and its grounds an elegant classical style.

It is an 18th century masterpiece. Admire the regal rooms of the Emperor Paul I. Then note the contrast of the charming rooms of his wife, Maria. The palace's fame rests on its splendor and profound art collection, as well as on the beauty of its lavish landscaping.

This spectacular, Visas Included St. Petersburg tour covers all fees and includes an English-speaking guide, lunch, and a bottled water. Book this St. Petersburg tour today to reserve your next great getaway. Touring April - October; not operating on 2s and 5s.

Please Note: All of our St. Petersburg tours are operated by authorized guides, and you therefore do not need to secure an independent visa in order to participate in this tour. However, in order to book this tour, you must provide us with full names, dates of birth, nationality, and passport numbers for each tour participant so that our guides can secure the proper tour visas on your behalf. Note also that, if you wish to explore St. Petersburg on your own while not accompanied by one of our guides, you will need to secure an independent visa.

Please be aware that cruise lines occasionally mislead passengers by telling them that they are not allowed to disembark the ship in St. Petersburg unless they are on an excursion purchased through the cruise line. In addition, the cruise lines also sometimes tell passengers that they cannot disembark the ship until the passengers on the cruise lines' excursions have done so first. This is incorrect, and you are free to exit the ship as soon as passengers start to disembark because Russian law states that a cruise ship cannot hold passengers onboard against their will as long as they have the proper documents. In order to clear immigration, you will need to bring along: 1) Your passport; 2) A photocopy of the picture page of your passport; and 3) A copy of your tour tickets. We will provide you with your tour tickets as part of the documents we e-mail to you after you make a tour booking.

Food/Beverage Provided
Bottled water and traditional Russian lunch. Additional snacks available for purchase and recommendations will be made by the guide.

Recommended Dress
Comfortable lightweight clothing and walking shoes is suitable for late Spring and Summer. Sweaters or jackets are highly recommended for the winter months. Umbrella is advised in case of rain.

Restrictions
Must be able to get in and out of vehicle. Not wheelchair accessible.