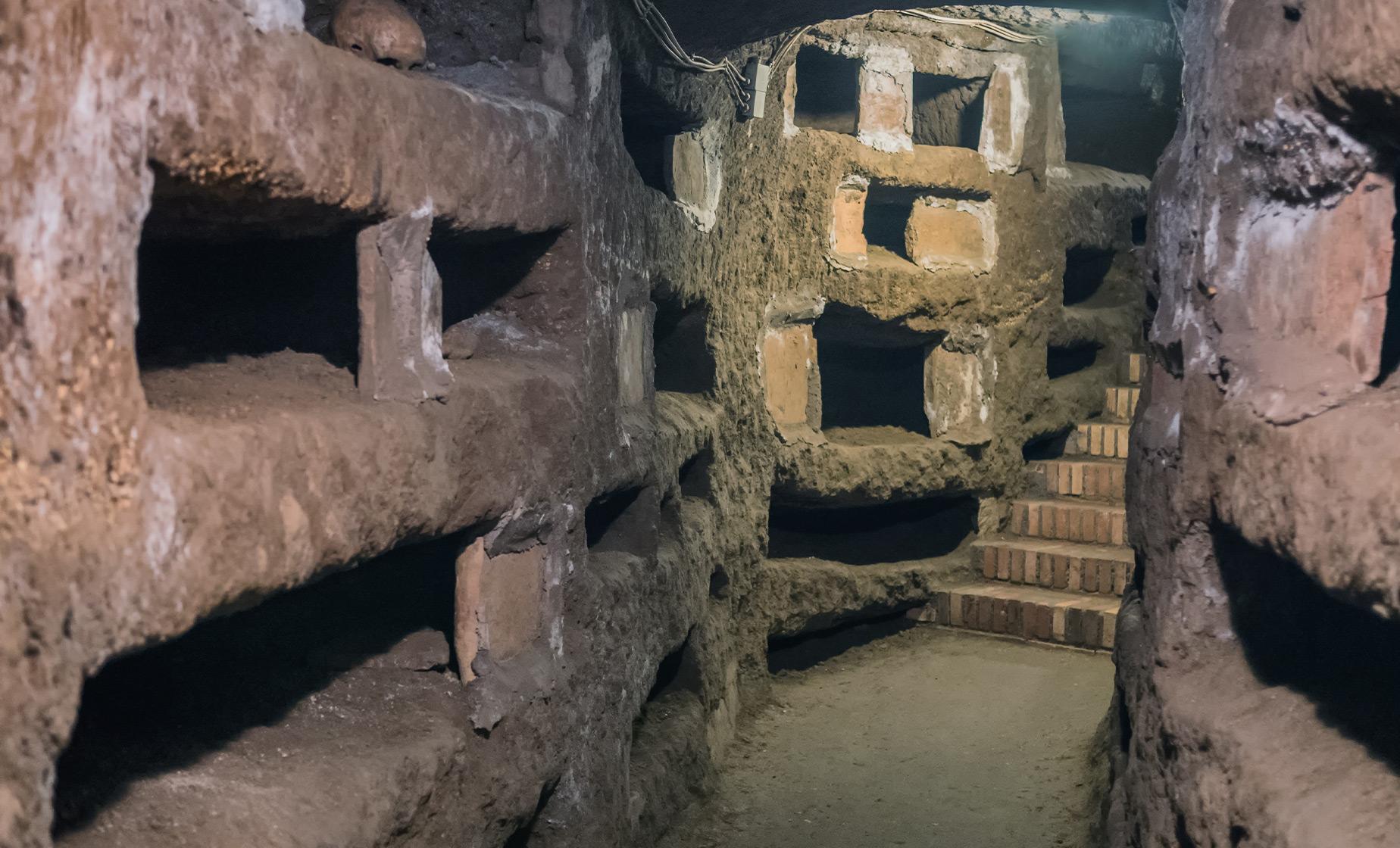 Discover the ancient Roman burial places known as the catacombs just outside the confines of modern-day Rome. You'll ride with your friendly guide to either the Catacombs of Priscilla, the most ancient and important of all Rome's catacombs.

Begin your tour with the visit to the Capuchin Crypt, known also as the The Crypt of the Bones, located under the 17th century Santa Maria della Concezione church. Consisting of five successive chambers, it is likely to leave a lasting impression on you. The crypt used to be a burial place for the monks, and the chambers are decorated in patterns constructed entirely of bones of around 4000 monks!

Next on this unique Roman catacombs tour, you'll descend into ancient Christian burial grounds. Within the maze-like structure of chambers and narrow corridors, you'll feel like you're in an Indiana Jones movie, solving an ancient mystery. This Rome tour will teach you about the role catacombs played in ancient culture and how they were used during times of religious persecution. Famous for the wonderful paintings, these catacombs are the perfect testament of life of the early Christian communities and feature the most ancient image of the Virgin Mary currently known.

When you arrive at the church of St. Clement's, you'll descend three levels to discover two thousand years of history. As you look around you'll notice how many buildings were built on the remains of older structures, like civilizations piling on top of one another. St. Clement's was built over the remains of a 4th century basilica, which was built upon even older buildings from the time of Emperor Nero. It is fascinating to see the layers of history right in front of you. You'll finish your Roman underground tour at St. Clement's, which is just minutes away from the Colosseum.

As you discover the ancient secrets of Rome, your expert guide will share a wealth of information about each site. Experience history first hand as you trek underground for an unforgettable tour of ancient Rome.

Please Note: The entrance fee (approximately 8.50 EUR per person) for the Capuchin Crypt is not included in the tour price, and must be paid at the church on the day of your tour. This tour takes place in Rome. Guests on ships docking in Civitavecchia will need to make their own way to Rome from Civitavecchia (approximately 50 miles away) at their own expense. A taxi ride takes approximately 1 hour and 15 minutes to and from the pier each way. There is train service from nearby train stations, and the average trip takes approximately 90 minutes each way. Your cruise ship may offer a shuttle to a nearby station.

Shore Excursion Departs From
Central Rome. (Full details will be provided in your electronic ticket upon confirmation.)

Recommended Dress
As you will be visiting a religious or memorial site, shoulders and knees must be covered. We recommend wearing comfortable clothing and sensible, flat-soled walking shoes. Sunglasses and sunscreen are suggested.

Restrictions
This tour takes place in historical areas and, therefore, is not wheelchair accessible. Guests must be able to walk on paved, as well as cobblestone surfaces. There are steps required to enter several of the sites, as well as steep curbs in some areas. This tour is not suitable for guests with walking difficulties or those who use partly-motorized vehicles or walkers. Children of all ages may attend the tour.

Please use this field to list the name, age, height, and weight of each child in your party, and to request the required safety seat necessary for all children in your party to participate. We recommend requesting child seats for all children under 12, but individual circumstances may vary, depending on the height and weight of the child. If you do not need to request a child safety seat for this tour, please enter "N/A".