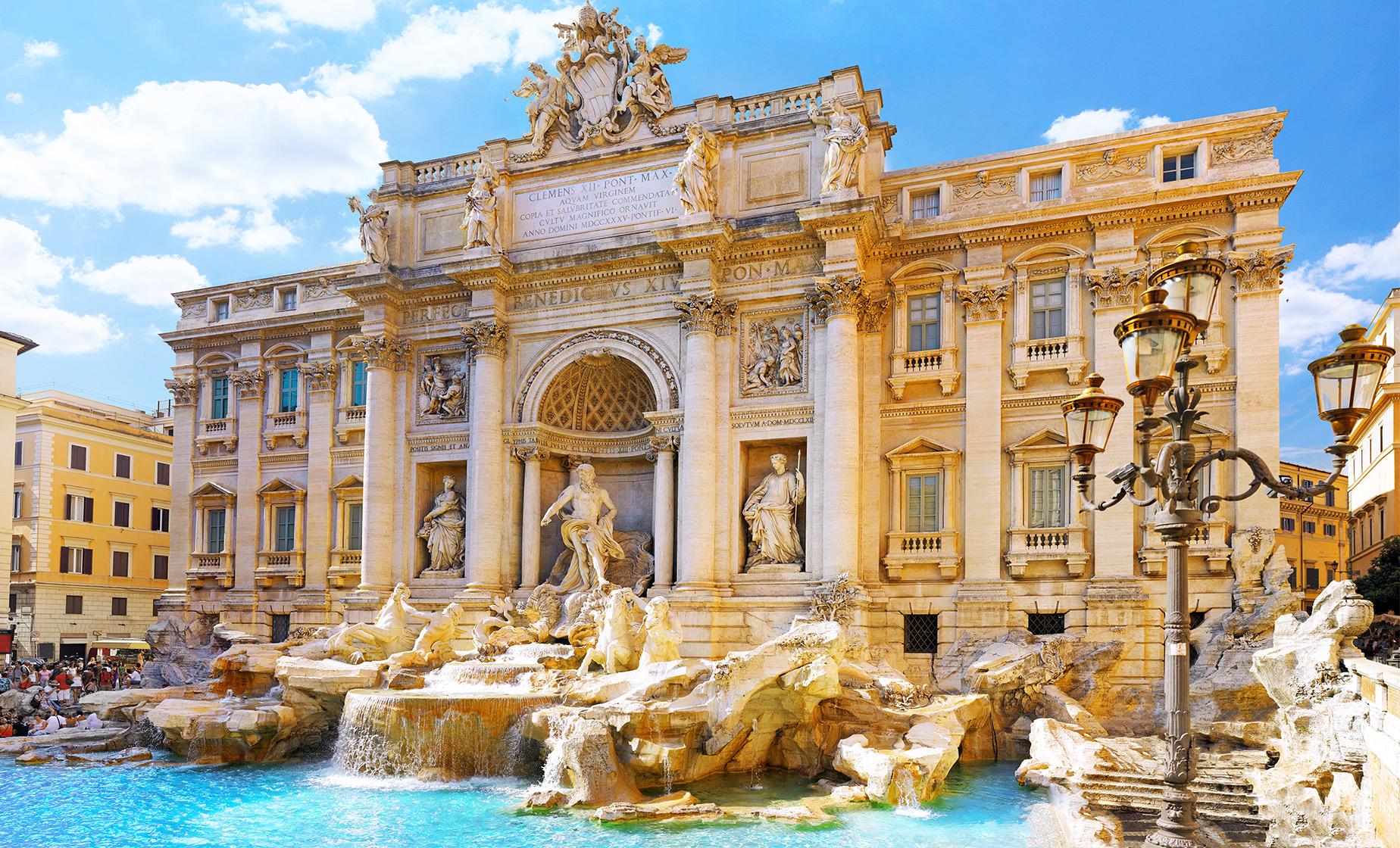 On this full day tour of Rome, travel past the ancient ruins of the Palatine and Capitoline Hills, Circus Maximus, and observe the majestic Colosseum. See architectural feats such as the Victor Emmanuel Monument, Mussolini's Balcony, Fountain of Four Rivers, and the world famous Trevi Fountain. The day is rounded out with a visit to Vatican City, the seat of the Catholic church.

Your Civitavecchia tour begins with your arrival in Rome, where you'll pass by the Roman Forum. The city was founded in 753 BCE upon the Palatine Hill, one of the famed seven hills that encompassed Ancient Rome. In the same vicinity is the Circus Maximus, where chariots raced for the entertainment of Ancient Roman citizens. Measuring 2,037 feet (621 meters) in length, it is truly a marvel to behold. Your guide will also lead you by the Capitoline Hill and the Victor Emmanuel Monument, also known as the Altare della Patria. This monument was built in honor of a unified Italy's first king, Victor Emmanuel, depicting the king sitting on a horse. Nearby is the Palazzo di Venezia, where Facist dictator Benito Mussolini held office and delivered many of his speeches from the balcony, now named after him.

Next, observe the most known symbol of Rome: the Colosseum. Built between 70 AD to 80 AD, the Colosseum boasts the title as being one of the New 7 Wonders of the World. Originally called the Amphitheatrum Flavium, or Flavian Amphitheater, it hosted gladiatorial contests, mock naval battles, animal hunts, and acted as a venue for the martyrdom of Christians. You will have time to capture stunning photos of this Roman landmark from your observation point.

Afterward, you'll be driven downtown to enjoy a small walk around the Baroque section of Rome, where the legendary Trevi Fountain is located. Continue the tradition of throwing a coin back over your shoulder into the clear waters below Nicola Salvi's masterpiece. Resume to the Piazza Navona for a small lunch break (additional cost). Sit at one of the open air cafes while gazing at the mesmerizing Fontana dei Quattro Fiumi (Fountain of the Four Rivers) by Bernini.

No day would be complete without a visit to the Vatican City, officially its own state separate from Italy. Proceed towards the glorious St. Peter's Basilica, where upon entering, you can stare in wonder at the Pieta by Michelangelo. In the middle sits St. Peter's Baldachin, the Baroque styled bronzed canopy held by by four pillars over the central altar. On the next level down in front of the altar lies the remain of the first Pope, Christ's apostle Saint Peter.

After exploring more of the Basilica, you'll have some time to visit the Vatican souvenir shop to look for gifts. Enjoy a drive back to Civitavecchia after an eye opening visit to Rome. Book this tour today for an unforgettable Italy excursion.

Please Note: This tour is intended for guests arriving in Civitavecchia. While guests staying in hotels are always welcome, they are responsible for arranging their own transportation to to the meeting location on the day of the tour. This tour is available in Spanish upon request. Please select your preferred language above when placing your booking. This tour can accommodate guests who are disembarking their cruise ship with luggage. You may bring luggage on this tour and leave it on the bus while touring. If you are disembarking your ship and do not wish to ride back to the cruise pier, the tour will end at the Justice Palace, Piazza dei Tribunali. All guests who are returning to the port should consult the guide for the final departure time and location for the shuttle back to port. Earphones must be purchased at the beginning of this tour (2.50 EUR per person). There are no exceptions. Entrance fees to attractions/museums are not included with the price of this tour. Though entrance to St. Peter's Basilica is free, you have the option of buying a 1-hour guided tour for 20 EUR per person (not included) payable on site.

Shore Excursion Size
Standard
Shore Excursion Type
Cultural, Scenic
Shore Excursion Duration
8 Hours
Activity Level
Difficult
Shore Excursion Leaves From
If you are arriving by cruise ship, a 5-minute shuttle ride is required to reach your departure location. Guests staying in hotels in Rome must arrange their own transportation to the meeting location. Full details will be provided in your electronic ticket upon confirmation.

Recommended Dress
We recommend wearing comfortable seasonal clothing, sunscreen, and sunglasses. If you plan on entering St. Peter's Basilica, please be advised that a strict dress code is enforced. All guests must dress modestly and have their shoulders and knees covered to enter the basilica.

Restrictions
Participants must be able to step in and out of the vehicle and walk for approximately 3 to 4 miles over cobblestone, dirt, or uneven paths. Guests should be in good physical health to take this tour. This tour is not wheelchair or walker accessible, and is not recommended for guests with mobility issues.

5Based On 70 Reviews Review This Tour

Reviewer: Nick Wo
We had a great guide and saw so much in the little time we had. I wish they made some time to eat a meal, we had about 10-15 minutes to use the restroom and get food. This was not ideal but it was still a great tour and I would recommend it to anyone who has a short time in Rome

Fun day seeing all of the highlights of Rome!August 26, 2019

Reviewer: Alicia Quenemoen
We were VERY pleased with this tour! Everything went very smoothly. We had no trouble finding the tour operator at the cruise terminal and they did a terrific job keeping us on time all day and getting us back to the ship. The tour guide was extremely informative and we were able to see all of the sights on our ‘must see’ list for Rome. Note that there is a LOT of walking on the tour and it is pretty fast paced. My Apple Watch recorded that we walked 8 miles on this tour! Also, if you are hoping to be able to browse stores and shop at your leisure, this is not the tour for you. It is designed to see as much as possible in a very short time frame (which is exactly what we wanted!) I loved the fact that the tour included a skip the line entry at Saint Peter’s Basilica. Would highly recommend this store to anyone!

Reviewer: Pamela
Our tour guide, Christian, was fabulous! His knowledge was superior! We saw lots of amazing things! Great overview! We want to go back and explore even more!!

Reviewer: Steve James
Chris our guide was excellent. The radio headsets were such a bonus, makes it much more enjoyable because you can hear everything. It is a long walking tour but plenty of stops, rests and shade were accounted for. Enough free time was granted for a bit of bite to eat but not too much. Excellent way to see the highlights of Rome.

Reviewer: Rick Ricci
This tour was excellent, and even though it was a rather large group, it did not have the feel of one of those large tours. We appreciate having enough time at the Vatican. The tour guide took us through many of the historic sites and had an extensive knowledge of the history of Rome. We had an appropriate amount of free time. Overall, it was a great tour.