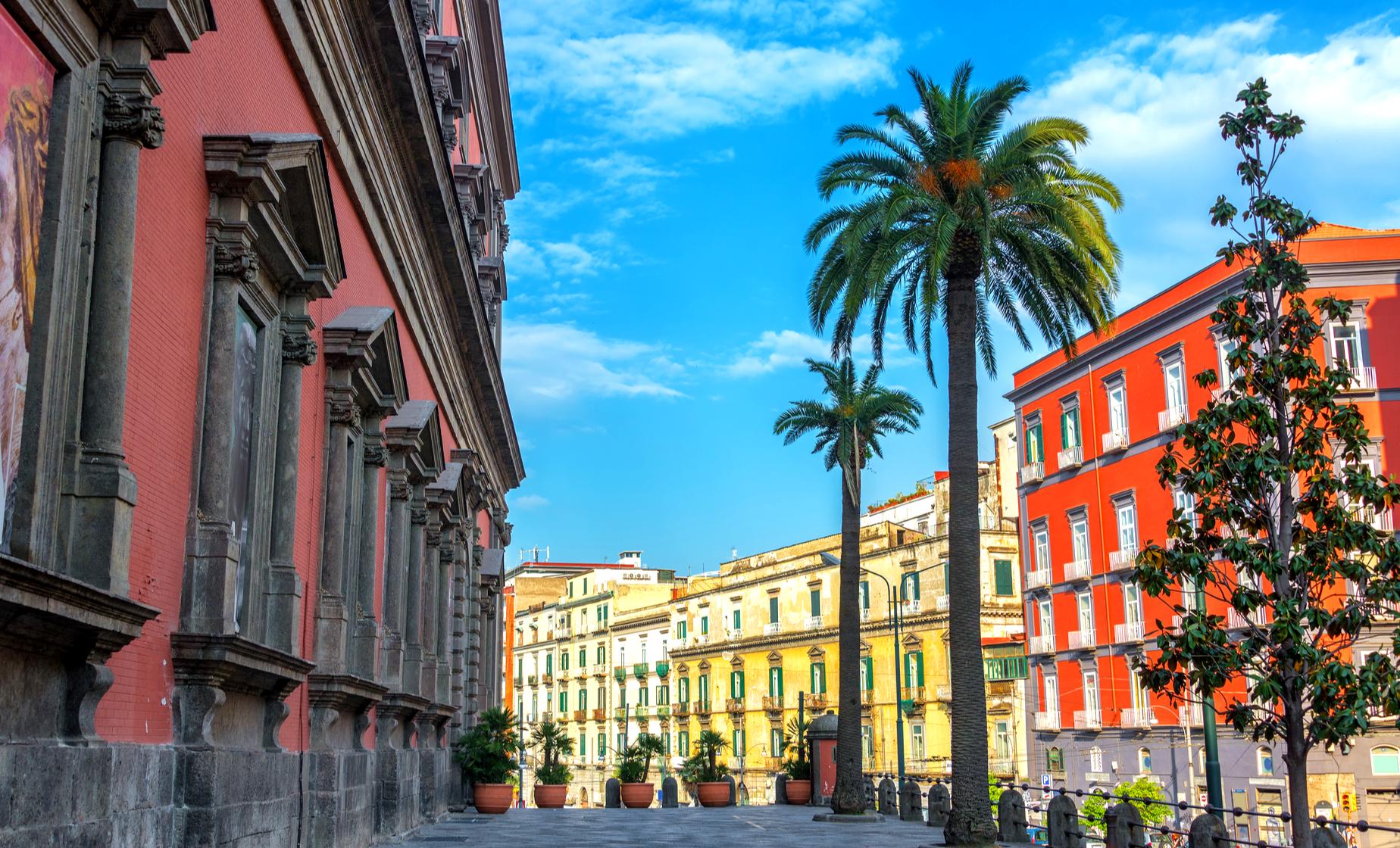 Cruise Ship Pier
Food/Beverage Provided Not Included
Recommended Dress We recommend wearing comfortable, seasonal clothing, good walking shoes, sunscreen, a hat, and sunglasses.
Restrictions Guests should be in good physical condition for this walking tour. You may encounter uneven and unpaved surfaces. This tour is not wheelchair accessible.

Be greeted by your local and knowledgeable representative at the pier who will personally guide you on foot through this amazing journey in Naples.

Start your walk and begin your journey toward the Neptune Fountain in Piazza Municipio. Naples is all at the same time gritty, chaotic and frenzied, but also one of the most utterly fascinating places in Italy and unlike anything else you may see on your trip.

Did you know there is an entire underground city underneath the daily life in Naples? Visit Ancient Greek streets and the Roman underground excavations where the old underground city remains frozen in time. The ancient Greeks built temples here thousands of years ago, and they were used as underground canals until the 19th century when they became bomb shelters during the World Wars. Many traces of each period are left everywhere, experience time travel as you view over 2,000 years of existence. View a recreated place where the ancient Greeks had extracted stones, see burial chambers and a theater, all footprints of human history.

Continue above ground and visit squares that are a mix of styles: through many invasions and cultural influences the center of the city has given way to a mixture of Pagan and Christian paths that are still characteristic of the present-day life. You will notice a contrast in styles in both the Piazza del Gesu and Piazza San Domenico Maggiore.

In San Gregorio Armeno Market you see the duality in all the artifacts of the typical shops but this double nature of the city is also expressed in the Baroque architecture of the Cathedral.

Neapolitan culture is expressed in the typical popular food and in the narrow streets full of locals that will color your walking tour with unbelievable effects. Stop for free time and some lunch (at your own expense).

After lunch, experience the view of the medieval Castel Nuovo, there are a total of three castles in Naples. Also called Maschio Angioino, it was built originally in 1279-82 in the French style by Charles I of Anjou. It was almost entirely reconstructed and embellished in 1443-53 by Alphonse I of Aragon who, to commemorate his entrance into the city, added the superb Arch of Triumph which constitutes the entrance to the castle. Next, you will see one of the world's best neoclassical theatres, Theatre of San Carlo. The theatre was built in 1737 for Charles III of Spain and Naples by Angelo Caresale by the Plans of Giovanni Antonio Medrano. The interior was decorated by Ferdinando Fuga and Domenico Chelli.

In front of San Carlo's Theatre, you will next walk inside the shopping center known as Galleria Umberto and then continue walking on to the historical location of Via Toledo and Piazza Plebiscito. The Piazza Plebiscito is a square named after the plebiscite that resulted in the 1860 unification of Italy. It is the largest square in Naples. The Piazza was laid under the orders of Joachim Murat the brother in law of Napoleon who was installed as the King of Naples after the defeat of the Bourbon rulers. He ordered the demolition of an ancient abbey and a church to make way for the square. When the Bourbons returned to power after the defeat of Napoleon, Ferdinand I, the reinstated Bourbon ruler completed the unfinished Piazza. Before the plebiscite, it was called the Largo di Palazzo or space in front of the palace. After World War II, it was neglected and became a large parking lot until 1997, when it was restored to its former glory for the G7 summit held in Naples.

Your tour will end at the Historical Center which is approximately a 20-minute walk back to your ship.

Please Note: The chronology of the stops may change due to the openings hours of some of the sites.

4.7 / 5  |  17 ReviewsReview This Tour
Best tour of Naples on foot
Our guide was professional and thorough. She was patient and took her time answering questions.
Reviewer: Jerry Colotti

Exactly What We Expected
The Underground portion of the tour is what separated this tour from the others. The pathways are understandably a bit up and down but nothing too strenuous. The area is well lit. Our tour guide was very knowledgeable and explained what we were looking at and gave us enough time for a pictures and questions.
Reviewer: John Johnston

Wonderful walking tour.
Our Guide Mira did a great job. We were from the United States and spoke only English and the other couple were from Seville Spain and spoke only Spanish. Mira would say it in English and then repeat it in Spanish. She also interpreted between us so we could speak to each other. All this and gave us a great walking tour of Naples. Thanks for a wonderful tour that went flawlessly. With even a parting tip of where to get great Pizza Thanks Mira the Pizza was delicious.
Reviewer: Rapid Robert

Good tour
The tour was good, very busy - quick pace. It would be nice to have a pamphlet that lists the places we visited with a brief description as it was quick and hard to make note of everything we did.
Reviewer: Lynn

HISTORIC CITY TOUR& UNDERGROUND of NAPLES.
ARRIVED IN NAPLE IN AUGUST 22-th.WE MET OUR GUIDE,JUST IN TIME''WORLDTOURS''.WALKING TO DISCOVER THE ATTRACTIVE &HISTORIC STREETS IN NAPLE. VERY SPECIALFOR US.VISITING THE FAMOUS PRINCIPE UMBERTO'S GALLERY, THE PALAZZO&GREAT ROYAL LIBRARIES.SHE IS TRULY A GOOD STORYTELLER OF DIVERSITY of THE PAST, THAT CONNECTED US WITH THE CITY'S HISTORICAL BACKGROUND.WALKING BY DELIGHTFUL COASTAL LANDSCAPE, AND THEN IN CATHEDRAL ON VIA SAN SEBASTIANO,CHIESA DEL GESU NUOVO ,AMONG THE CHURCHES IN THE CITY CENTRO STORICO.WE ENTER AT THE MUSEO SAN LORENZO MAGGIORE WHERE WE GOT MR.DAN AND GOING DOWN IN THE UNDERGROUND 10 METERS BENEATH THE BASILICA.SEEING THE ORIGINAL CITY RUINS; WINERIES&LAUNDRIES.WITH A SUBTERRANEAN ROAD, SOME ROOMS,OF AN ANCIENT MARKET; NAPOLI SOTTERRANEA.OUR GUIDE WAS WAITING FOR US PASSIONATELY. THEN SLOWLY TAKING US BACK TO THE PORT.WE WISH TO THANK HER FOR ALL THE BEAUTIFUL,LONG HOT DAY!&HELP! MOLTO GRAZIE!! CATHERINA &LESLIE. MONTREAL/CANADA.
Reviewer: ECATERINA &LADISLAU LAZA

Fantastic
Our guide was incredibly knowledgeable and we saw an incredible amount of sights. More then we expected. Certainly will book you guys again because of her.
Reviewer: Anthony Hoover