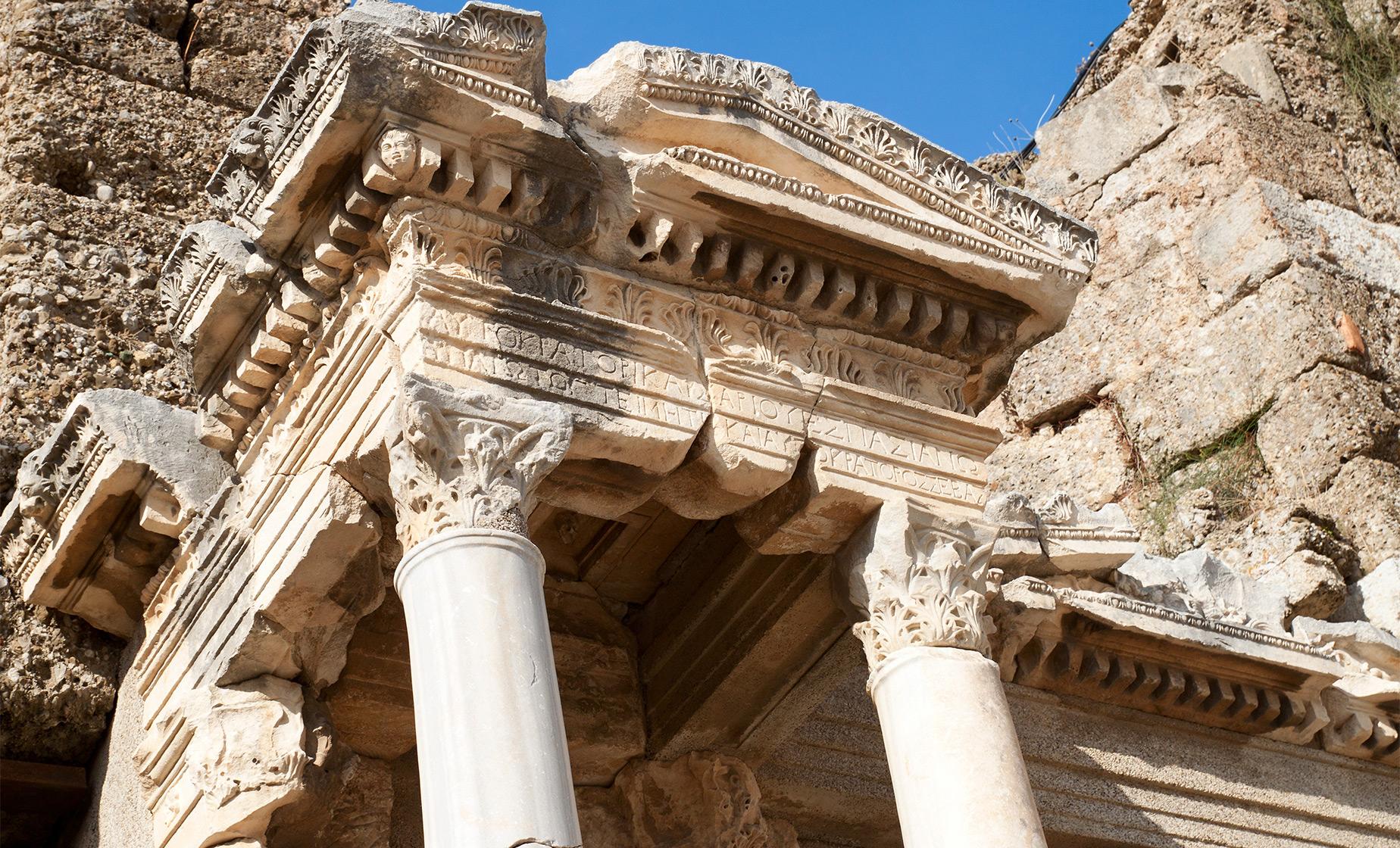 Cruise Ship Pier
Food/Beverage Provided None
Recommended Dress Comfortable clothing and sensible, rubber-soled walking shoes are recommended. Sun glasses and sun screen are suggested.
Restrictions Guests must be able to walk over uneven paved, as well as cobblestone surfaces. There are several uneven steps along the way. Tour starts at the upper part of the city and ends at the lower gate. This tour is not wheelchair accessible

Meet your professionally trained tour guide and set out for a fascinating Exclusive Ephesus, Turkey Tour. The ancient city is located approximately 75 minutes' drive from Izmir. Famous in antiquity for its Temple of Artemus during the years of the Roman Empire, the Greek port of Ephesus became the greatest city in Asia Minor.

You will start at the upper (Magnesia) Gate, and work your way down through the city, ending near the ancient Harbor. Along the way, you will see the Forum, the Odeon, the Library of Celsus, the Thermal Baths of Scolastika, and the Great Theater, built in the Greek era and reconstructed in the Roman period. It has played host to programs as varied as Paul and his sermons to the Ephesians, to concerts by Sting, in part due to its remarkable acoustics.

You will walk along the Arcadian Way, where once Mark Anthony and Cleopatra rode in procession. You will hear stories of Alexander the Great, the Virgin Mary, and many other famous visitors who walked the same marble streets that you are walking. As you depart the Ephesus site, you will be able to view the hilltop ruins of the Basilica of St. John in the distance, which was erected over his grave in the 6th century A.D. by Emperor Justinian.

Towards the end of your tour, you will be treated to an optional carpet demonstration and a chance to negotiate for a carpet. If you do not wish to attend the carpet demonstration, there is free time for shopping or purchasing refreshments. Turkish salespeople expect you to haggle and quite often you can get 10-15% off the listed price. Treat it as an adventure.

From here, you will drive back to Izmir.

4.5 / 5  |  22 ReviewsReview This Tour
Fascinating experience
We were met by our tour guide Emre at the cruise port exit. We found him to be very knowledgeable, friendly and fluent in English. The tour was fascinating, and Emre only enhanced that experience. In a word, he was terrific! We would forego the optional carpet demonstration (we have since learned that this is popularly known as ""the flying carpet"" act, because they surround you in a large room with carpets that they roll out, one right after the next). Do the shopping time instead. Again, our tour guide Emre was awesome; if you sign up for this tour, see if you can request him.
Reviewer: Tom and Peggy

Great Tour Guide
The tour guide was great, but there were 5 cruise ships in port and Ephesus was crowded!! We had visited Ephesus 20+ years ago and almost had the place to ourselves. We went by the carpet demonstration and it was interesting and the carpets are beautiful. I highly recommend this company for shore excursions as the tour guides are high quality, there's a smaller group and a lower cost.
Reviewer: TravelGrandma10

amazing
This was a wonderfully unique tour with a very well informed guide. I would recommend this adventure to everyone.
Reviewer: pink Peone

wonderful experience
Excellent guide and excellent bus and driver. The stop at the rug factory was educational but way over the top in trying to corner people and sell something.
Reviewer: Jim

Great Excursion
The small tour size of 30 or less makes the tour more productive. Our guide was very well qualified, his name Femi. He moved the group cohesively and was always in charge. He kept the group and the tour moving and gave us just the right amount of free time for photos and shopping. One of the best tours of my trip.
Reviewer: Rich

Time Machine Travel
Whether you are a history buff, religious scholar or just an appreciative tourist that enjoys learning about ancient cultures, this tour to the city of Ephesus is right for you. The city was famed for the Temple of Artemis and was one of the Seven Wonders of the Ancient World. It's easy to see why it is among only seven churches in all of Asia to be cited in the Book of Revelations. Our expert tour guide brought this city's ancient glory back to life through great visuals and intelligent narrative. Well worth the price.
Reviewer: Laurence