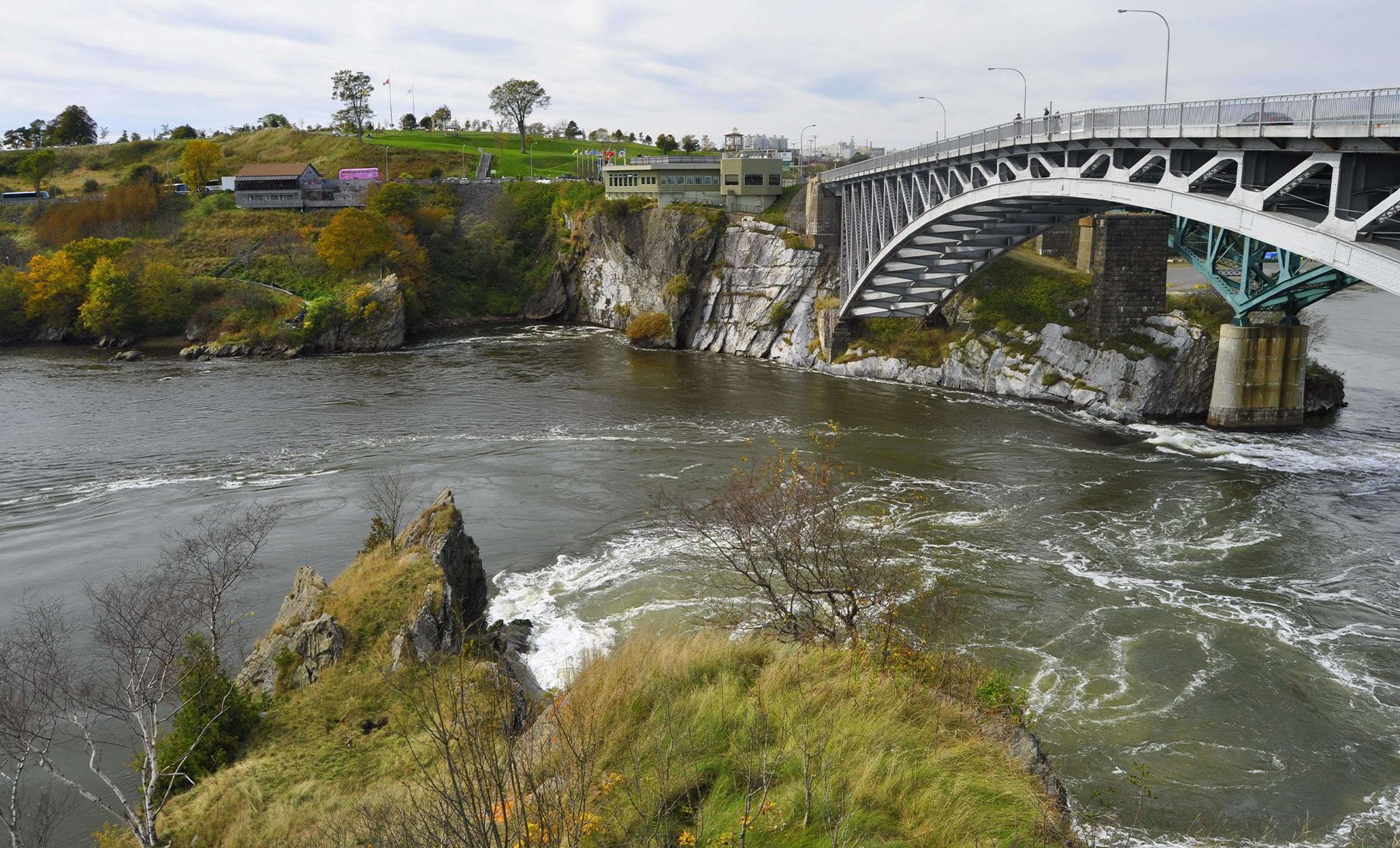 Explore one of the world's most dramatic and dynamic coastlines, Atlantic Canada's Bay of Fundy. Home to the highest tides in the world, the Bay of Fundy is a 170-mile-long ocean bay that stretches between the provinces of New Brunswick and Nova Scotia on Canada's east coast. Each day 100 billion tons of seawater flows in and out of the Bay of Fundy during one tide cycle - more than the flow of all the world's freshwater rivers put together!

This tour will take you to St. Martins, one of the quaintest fishing villages in New Brunswick. Over the past decade, St. Martins has become known as one of New Brunswick's most beautiful seaside vacation resort communities. The village is a magnet for artists and photographers wishing to capture the unspoiled beauty of the area. A small community of artisans produces pottery, jewelry, paintings and sculptures. And there are a growing number of unique shops and galleries. Learn about this small community's wooden ship-building industry and see some of the highest tides in the world ebb and flow during your visit. At St. Martins you will have the opportunity to visit the twinned covered bridges, lighthouses, and even walk on the ocean floor - at low tide of course. Don't forget to visit the wave-carved sea caves in the sandstone cliff if the tide is low enough to allow access while you're there. It is a photographer's delight! There will also be an opportunity to purchase a mug of world-famous seafood chowder.

Back in St. John, you'll have an added bonus of also visiting the world-famous Reversing Falls, where the huge tides from the Bay of Fundy force the mighty Saint John River to flow in reverse, twice every day. The final stop on this tour will be the Old City Market. First opened in 1876, the Old City Market is the oldest continuing farmer's market in all of Canada. The roof of the City Market resembles the inverted keel of a ship, with hand-hewn timbers and dove-tailed joints that have stood fast for more than a century. From the market you will return to your ship pier.

Restrictions
Guests must be able to walk over paved, gravel, and packed dirt surfaces. This tour can accommodate a collapsible wheelchair. The minimum age to participate is 6 years old.

4.7 / 5  |  83 ReviewsReview This Tour
FUNDY COAST
A WONDERFUL TRIP THROUGH SOME BEAUTIFUL LAND. WE LOVED THE MARITIME PROVIDENCES. PEOPLE WERE WELCOMING AND GUIDE WAS EXPERIENCED AND ENTERTAINING WITH FACTS AND HUMOR. WE WERE FORTUNATE TO WITNESS BOTH "ENDS" OF THE REVERSING FALLS. TAKE THE TOUR AND FIND OUT WHAT I MEAN.
Reviewer: BILL FORBRICH

Fundy Coast
Amazing tour! Our tour guide shared many interesting bits of information and the driver was so darn good. The fundy coast was an incredible site to see especially if given the opportunity to witness the tides, both high and low.
Reviewer: Sondie Reynolds

Fishing Village Delicious Plus!!!
This was such a wonderful experience! Seeing the country side. Gathering rocks along the shore, visiting the caves and wipe, wow, wow!!! The best fresh fish ever right at a little roadside restaurant off in a remote spot along the way! A memory we will always cherish !!!
Reviewer: The Holdren’s

Great trip with amazing facts
We had a wonderful guide who shared his knowledge with us and took us to some off the beaten path places. We got to walk on the beach at the Bay of Fundy and see the Sea Caves. A great trip which I totally enjoyed.
Reviewer: Joann Mansfield

Fundy Coast to Shore Tour
The bus trip and tour guide were excellent. We took many pictures but when we got to the Bay of Funday it was so beautiful I forgot to take pictures of the Bay
Reviewer: Ray Mulhall

Great trip!
Guide Mike Murphy and driver Randy made this trip really interesting and informative, despite a sub-tropical storm hitting us as we drove! Mike explained everything we were seeing and gave us an opportunity to leave the bus, although often the rain was too hard to want to leave. In adverse conditions, they made the trip enjoyable.
Reviewer: Eileen Oswald