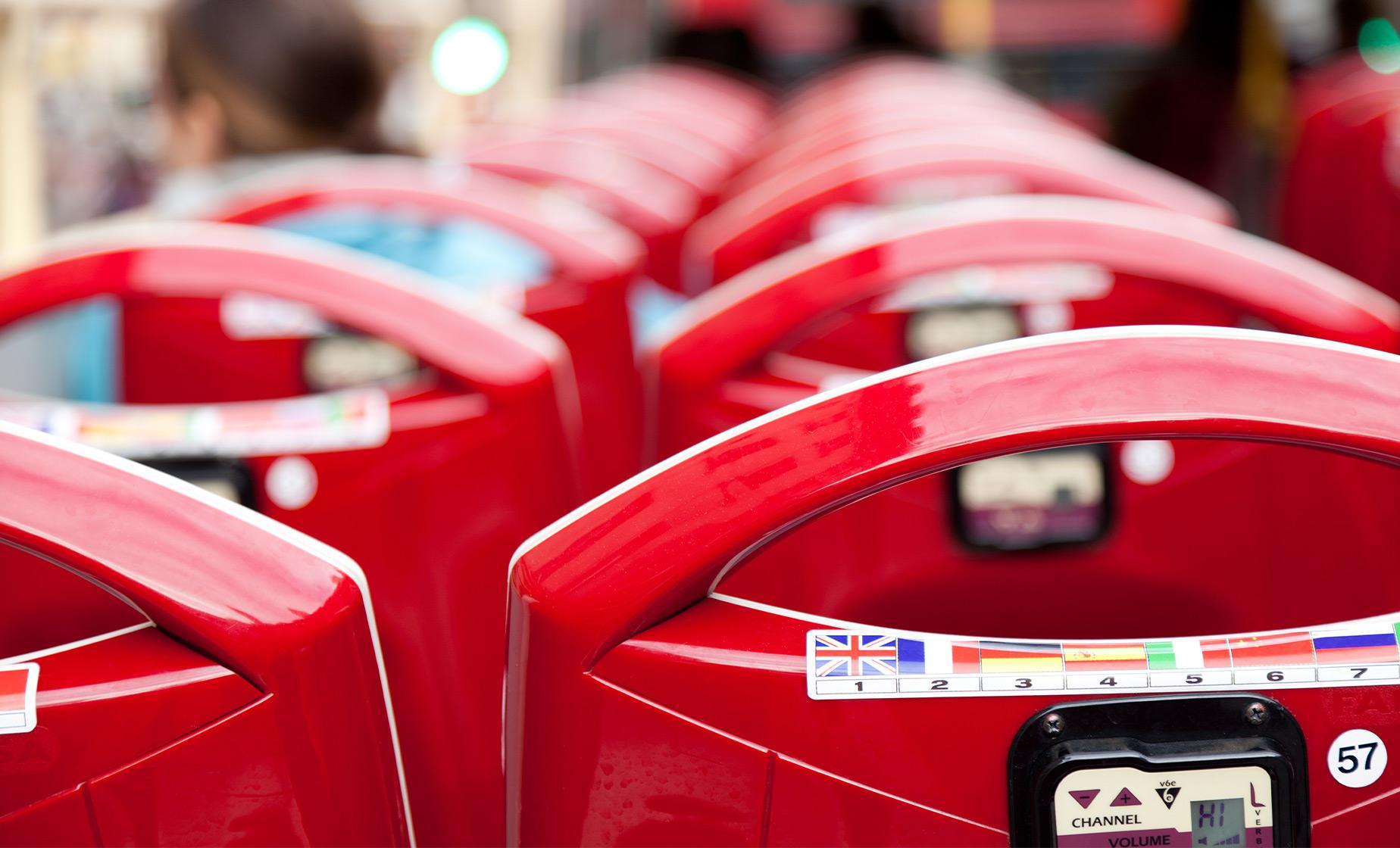 Central London.
Food/Beverage Provided Not Included
Recommended Dress Comfortable clothing and sensible, flat-soled walking shoes are recommended. Sunglasses and sunscreen are suggested.
Restrictions This tour can accommodate customers with a folding wheelchair. Customers must be able to walk short distances and/or a few steps on their own.

Ride high above the streets of London as you tour the city's most famous landmarks. You could take a London bus tour in a coach bus, but for a true London experience, step aboard a big red double decker bus so you can see the sights in style. Take a break from touring London by land and get a different perspective of the city on your relaxing River Thames cruise.

See the best of London with a friendly guide on your tour of this remarkable city. Your bus route includes the Gothic masterpiece known as Westminster Abbey, first constructed in the 1200s and most recently the location of the wedding of Prince William and Kate Middleton. You will also see the famous clock tower called Big Ben and the Houses of Parliament, also known as the Palace of Westminster, where the House of Commons and the House of Lords meet. Your guide will also bring you to the Tower of London, the infamous prison and palace. See the Beefeaters who guard the Crown Jewels and pass by Traitors Gate, where prisoners once entered their final home.

Take a half hour cruise along the River Thames to see London from its most famous waterway. Get out your camera to capture the images of some of London's iconic landmarks. You'll see Shakespeare's Globe Theater, London Bridge, and Cleopatra's Needle. The cruise terminates at Westminster Pier, where you will once again board the double decker bus to tour another London highlight, Buckingham Palace. No visit to London is complete without seeing the Changing of the Guard at Buckingham Palace. Enjoy the precision of this entertaining tradition outside the home of Queen Elizabeth II and her husband, Prince Phillip. Your London bus tour concludes near the London Eye, Europe's highest observation wheel. Climb aboard a red double decker bus for a truly authentic British touring adventure.

Please Note: The changing of the guard can only be seen on the morning tour. The afternoon tour will still stop for pictures at Buckingham Palace.

4.6 / 5  |  5 ReviewsReview This Tour
Great excursion
We enjoyed this excursion during a very short stay in London on the way to Southampton. We had to call the operator to schedule the tour for the morning of our cruise departure, because the online system wouldn't allow booking this tour on the same day. It is a very informative overview tour if you are only in London briefly. The Thames cruise part was our favorite. Do not hesitate to book this excursion!
Reviewer: Leonid Zakharov

Open Top London Double Decker Bus and Thames Cruis
This was a great way to get an over view of London with time limitations.
Reviewer: Robert Culp

Open top bus
Sinead was great. Seemed like she enjoys her job and banter with the group. The bus terminal was early and a little hectic but interesting. We got off for Westminster abbey, view of St. Paul's and the guard change. Sineads excitement over guard change was contagious as she marched us around to the secret spots. We stayed at st James park after guard change and skipped the boat. We just let them know and they were cool. The park btw is nice so we stayed and walked back to hotel. Kids were tired of the tour and wanted to break loose. Early tour is surprisingly chilly when cloudy even in July because it's open top.
Reviewer: Jason

Amazing tour guide
This tour of London was led by a man who must have been a history professor. His knowledge was amazing. We got off the bus at a few places and walked a bit. The cruise boat was VERY nice - elegant seats, all inside, and the same quality tour guide narrated. They sold wine, etc. - really nice experience.
Reviewer: Ginny Cole