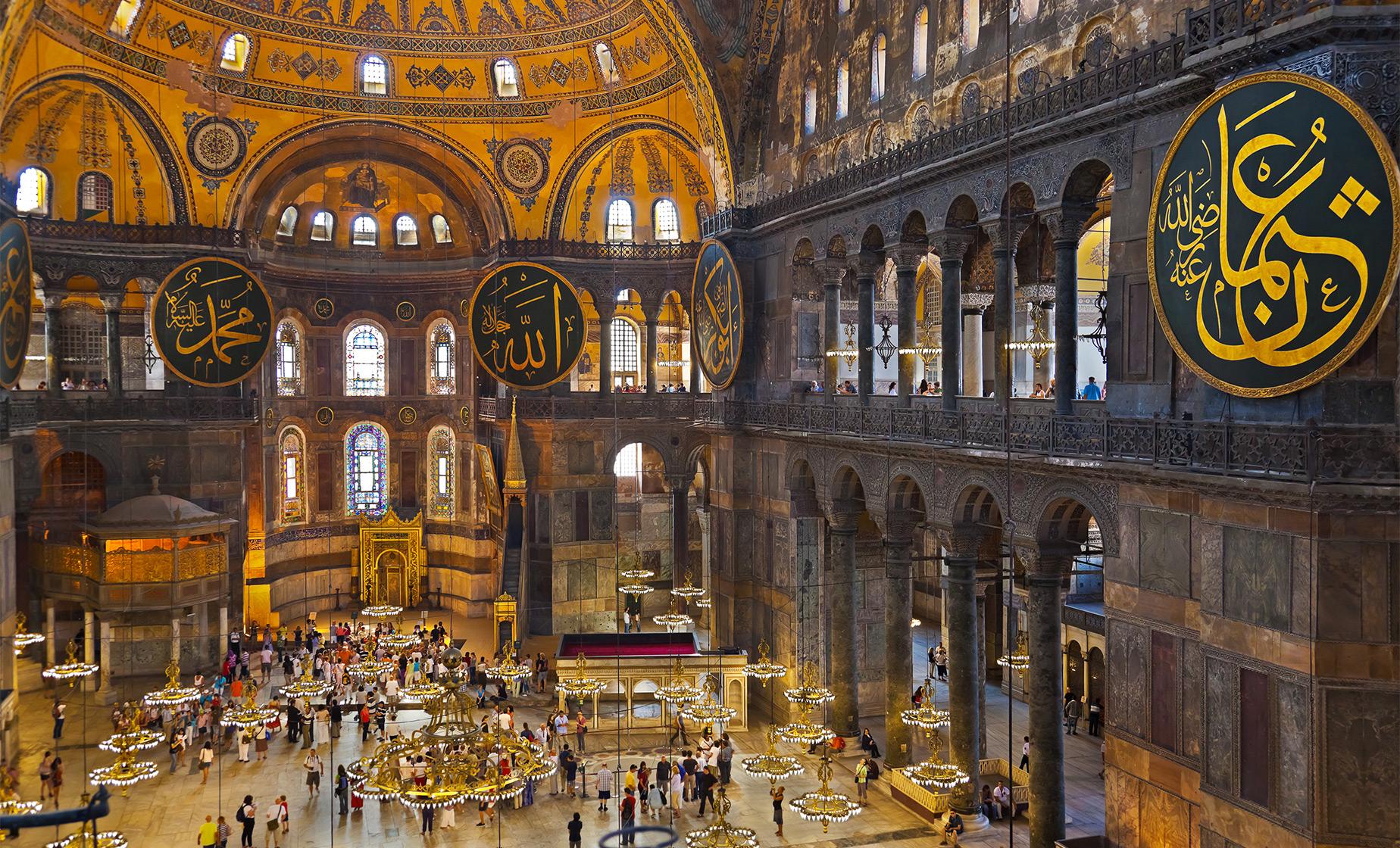 4.5 / 5  |  4 ReviewsReview This Tour
Price: $59.00
This tour is only offered on Fridays due to special opening hours at some sites.
Choose Options My Cruise Itinerary
Summary
Shore Excursion Size

Cruise Ship Pier
Food/Beverage Provided Not Included
Recommended Dress When visiting religious sites, shoulders and knees should be covered. The Blue Mosque is a place of worship, and women are required to wear a head covering when entering. Head coverings are available at the Blue Mosque entrance at no charge. There is no need to cover the face as the covering is meant to hide a woman's hair only. Comfortable, sensible slip-on shoes are recommended. Sunscreen and sun glasses are suggested.
Restrictions Walking is over cobblestone, tiled and paved surfaces. There are a few steps at the entrance to Hagia Sophia.

After meeting your professionally-trained guide on the pier, you will begin an orientation drive through the business center of the modern city, across the Galata Bridge, along the banks of the Golden Horn and under the Byzantine Aqueduct of Valens. Along the way, you will see the Süleymaniye Mosque, dedicated to Sultan Süleyman the Magnificent. You will continue around the mighty city walls, which once protected Constantinople from the many invasions and attacks it incurred over the centuries.

In the Old City, your first visit will be to the Hagia Sophia, the Byzantine Church of Divine Wisdom. Originally built as an Orthodox basilica, it later was used as a mosque, and now is a museum. Built in 537 on the orders of the Byzantine Emperor Justinian, it served as the cathedral of Constantinople and was the largest cathedral in the world for nearly a thousand years. Upon the conquering of Constantinople by the Ottomans in 1453, it became a mosque and was used as such until 1931. It was opened as a museum in 1935.

You will then have approximately 60 minutes for lunch on your own.

After the lunch break, you will visit the world-renowned Blue Mosque finished in 1616. The Blue Mosque was commissioned by Sultan Ahmet I when he was only 19 years old. The interior of the mosque is lined with more than 20,000 handmade ceramic tiles in more than fifty different tulip designs. The tiles at lower levels are traditional in design, while in the galleries they become flamboyant with representations of flowers, fruit, and trees.

You will be treated to an optional carpet demonstration with about 1 to 2 hours of shopping in the open (uncovered) section of the Grand Bazaar and the nearby covered area of the Grand Bazaar that dates to 1461. Well known for its jewelry, pottery, spice, and carpet shops, it also has areas where stalls are grouped by the type of goods they sell, such as leather coats or gold jewelry. What started as one main building has grown into a sprawling complex consists of 12 major buildings accessed through 22 doors. It is thought to have more than 5,000 shops/stalls, two mosques, two hammams, and many restaurants and cafes. Explore the shops filled with jewelry, carpets, leatherware, and copper goods. You will then be returned to the ship pier. Your time at the Bazaar is enough for an introduction. This is not a "shopping" tour. For the serious shopper wishing more time in the Bazaar, you can end your tour here. Please let your guide know you are not returning with the group. Guests remaining at the Bazaar are responsible for their transportation back to the pier.

Please note: This tour is only offered on Fridays due to special opening hours at some sites. The carpet demonstration is optional and guests not wanting to attend can use the time to stroll, shop or purchase a refreshment.

4.5 / 5  |  4 ReviewsReview This Tour
Exploring Istanbul
This excursion met expectations. The guide was very accommodating and ""knew the ropes,"" in terms of which place to visit when. It was an enjoyable experience.
Reviewer: Frisky seniors

Istanbul tour
The only concern was the bazaar. Vendors are very aggressive and you have to be EXTREMELY cautious. Other guests on our cruise were locked into a shop and not allowed to leave until they made a purchase.
Reviewer: Jo-ee

Unique and somewhat bizarre
Some of the sites were overcrowded, however likely that's the case this time of year. If you are not culturally diverse skip this tour.
Reviewer: taxiu7

Personal Tour
The guide and driver were very nice, well educated on the subject matter and experienced. They were at the pick-up point early and ready to go. We were able to get around with ease and the guide knew when to visit the locations without significant crowds or waiting. Great experience.
Reviewer: John