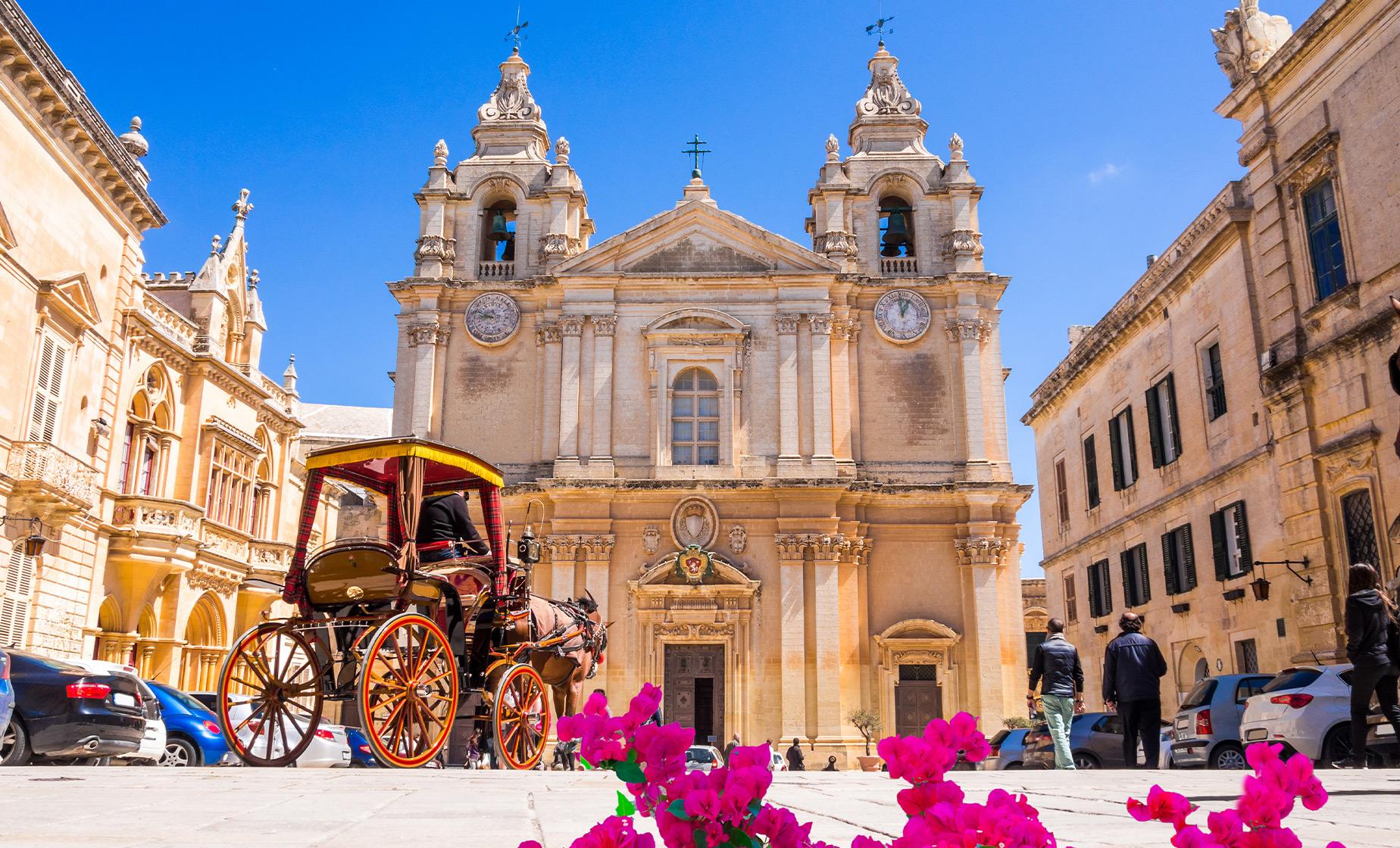 Cruise Ship Pier
Food/Beverage Provided Not Included
Recommended Dress We recommend wearing comfortable, casual seasonal clothing and walking shoes. A hat, sunglasses and sunscreen are also suggested.
Restrictions Guests must be able to walk over uneven surfaces, not recommended for those with mobility issues. This tour is not wheelchair accessible.

Welcome to the Malta, an island country located in the central Mediterranean Sea. A small but strategically important group of islands, the archipelago has through its long and turbulent history played a vital role in the struggles of a succession of powers for domination of the Mediterranean and in the interplay between emerging Europe and the older cultures of Africa and the Middle East. As a result, Maltese society has been molded by centuries of foreign rule by various powers, including the Phoenicians, Romans, Greeks, Arabs, Normans, Sicilians, Swabians, Aragonese, Hospitallers, French, and British.

An exciting place to visit where the azure color of the Mediterranean Island meets the honey-colored limestone that surrounds it. During this full day tour, you will first visit Mosta, Ta Qali, Mdina and finally Valletta, the capital city. Enjoy a full day of discovery with your local, knowledgeable professional guide as you take in all the must-see highlights of this area.

Start your journey first by travelling to Mosta, a central town famous for its Rotunda Church. The Rotunda is the third largest unsupported dome in the whole World with an internal diameter of 37.2m (122 feet) and walls nearly 9.1m (30 feet) thick. Built in the 18th-century, the Mosta Church is in the center of the city, and its architecture inspired by Rome's Pantheon.

The next stop is the town of Ta Qali, here you can watch local artisans at work blowing elaborate glass art pieces, intricately assembling original silver filigree jewelry and much more. This is the perfect place to pick up treasures that will remind you of your Malta visit. This town is located near a former WWII British outpost but was later converted to a village for local craftspeople.

You will then visit Mdina. Mdina, once the capital city of Malta inspires tranquility at any time of the day or night. The only way to really experience and enjoy this city is on foot, explore the quaint alleys, narrow streets, ancient buildings and magnificent far reaching views from the high bastion walls. Mdina is also called 'The Silent City' because of its quiet and narrow streets that give off a quaint yet very homey atmosphere. Mdina is not only considered to be one of Malta's precious jewels, but this ancient walled city is one of the best-preserved medieval fortifications. Admire the magnificent views of the entire Maltese landscape as you take some time to relax and enjoy the scenery.

Finally, you will visit Valletta, Malta's capital city and a World Heritage Site. Valletta contains buildings from the 16th century onwards, built during the rule of the Order of St. John of Jerusalem, also known as Knights Hospitaller. You will walk through the bustling streets and to Barracca Gardens, for a breathtaking panorama of the Grand Harbour.

Here you will have free time for lunch (at your own expense and at your own preference). You will then visit St. John's Co-Cathedral where you will see the painting The Beheading of Saint John the Baptist by Caravaggio, considered one of Caravaggio's masterpieces and the only painting signed by the painter.