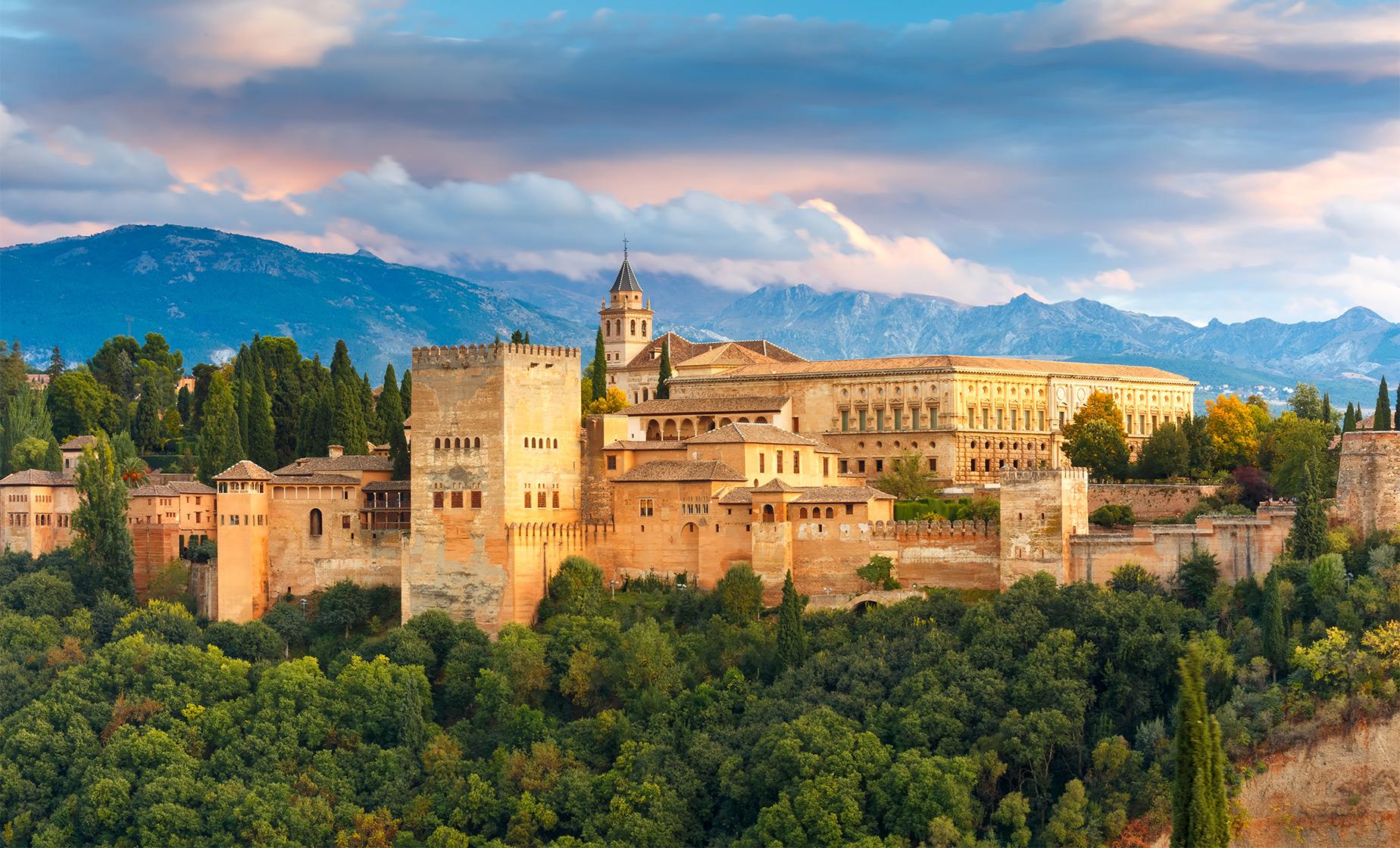 Enjoy a scenic motor coach ride to the Alhambra Palaces in Granada to see a maze of magnificent construction. Nearby is the Palace of Charles V. Travelers find this stunning Granada tour ideal.

Once you reach your destination you will be divided into groups of 10 to 18 participants per guide for a more personalized exploration. Originally built in 889, the Alhambra Palace is universally praised as a Moorish architectural masterpiece. Naturally, it's a UNESCO World Heritage Site and the second most popular attraction in Europe. While it began as a small fortress, in 1333 Yusuf I transformed the structure into a palace, a process which took over 100 years! Your English-speaking guide will escort you to the mighty structure to see its stellar halls, courtyards, and rows of intricately carved arches. On this exciting Granada tour, you'll visit the exquisite Nasrid Palaces, which included private rooms and residences for the king, as well as semi-public state rooms.

Next, you'll visit the Palace of Charles V of England, built within the site of the Alhambra Palace in 1526, largely as a symbol of victory for the Catholics over Muslims. It is lauded as a superb Spanish Renaissance structure, featuring the Torre de la Vela tower, and offering stunning views of Granada.

Thereafter, you will visit the Generalife, a royal place of recreation featuring gardens, waterfalls, and bathing pools. The elaborate facility was built during the reign of Muhammad III in 1309 as a vacation destination.

Time permitting, you will be driven to the Granada city center, where you will receive an orientation tour and have free time to explore on your own. Please be advised that the order of events may change based on the weather or traffic conditions of the day. Reserve this tour for memories that will last a lifetime.

Book this Malaga tour today for a memorable Spain excursion.

Please Note: Due to regulations at Alhambra, all guests are required to bring a government issued photo ID, such as a driver's license or passport, which matches the names listed on your e-ticket. If you are traveling in a group, please book together to ensure you are grouped together on the day of the tour, as each guide's manifest must match the ID's presented at Alhambra.

Restrictions
Guests must be able to walk, especially on stairs and on uneven cobblestones, and stand for long periods of time. This tour is not recommended for people with mobility issues. Due to regulations at Alhambra, all guests are required to bring a government issued photo ID, such as a driver's license or passport, which matches the names listed on your e-ticket. If you are traveling in a group, please book together to ensure you are grouped together on the day of the tour, as each guide's manifest must match the IDs presented at Alhambra. Infants ages 2 and younger are free to attend the tour but must be accounted for at the time of booking.

4.9 / 5  |  25 ReviewsReview This Tour
Awesome Alhambra Tour
We have had a great tour. Smooth pick from the cruise terminal, great and informative tour.
Reviewer: Evgeny

wonderful day
You can only get a remote idea of the beauty of the Al Hambra from books. The reality is so much more. You can read about the close interactions among Jews, Muslims and Christians for 700 years in this magical kingdom, but in acually going there you can have a bit of that experience . . . and feel the disappointment when it ended. The road trip through olive groves with a very knowledgeable guide, who directed us to a street tapas place in Granada that turned out to be a highlight of our trip, was a lot if fun.
Reviewer: gary samuels

Fabulous tour
Our group of four thoroughly enjoyed this tour. It was very well-organized, our guide was superb, and the bus was clean and comfortable. The Alhambra was magnificent - not to be missed!
Reviewer: Katherine Scheirman

Another amazing day!
Excellent. We went to all the amazing places we signed in for and more! Big and comfortable coach, stops to rest, very nice staff who provided us with a lot of information and recommendations along with history and/or data of places we were passing through. Guide at the Alhambra was excellent too. ps. I was on a HAL cruise, and purchased tours both through the ship and through Shore and believe me, Shore Exc tours were a lot better in content, price, equipment and, organization.
Reviewer: J. Lizardi

Must see in Granada
The La Alhambra and Generalife are a must see when you are in Spain. Such magnificent structures and gardens. Our tour guide was very knowledgeable and enthusiastic during the tour.
Reviewer: John W Lancaster

Wonderful Experience
We left our cruise ship and was greeted warmly by our guide. On the ride to Granada he was helpful in pointing out the sites along the way. The real experience began when we met our Alhambra guide, Francis. The tour is breathtaking and Francis was the most informed guide we have ever had. Don't miss the opportunity to visit Alhambra,
Reviewer: William Facinelli