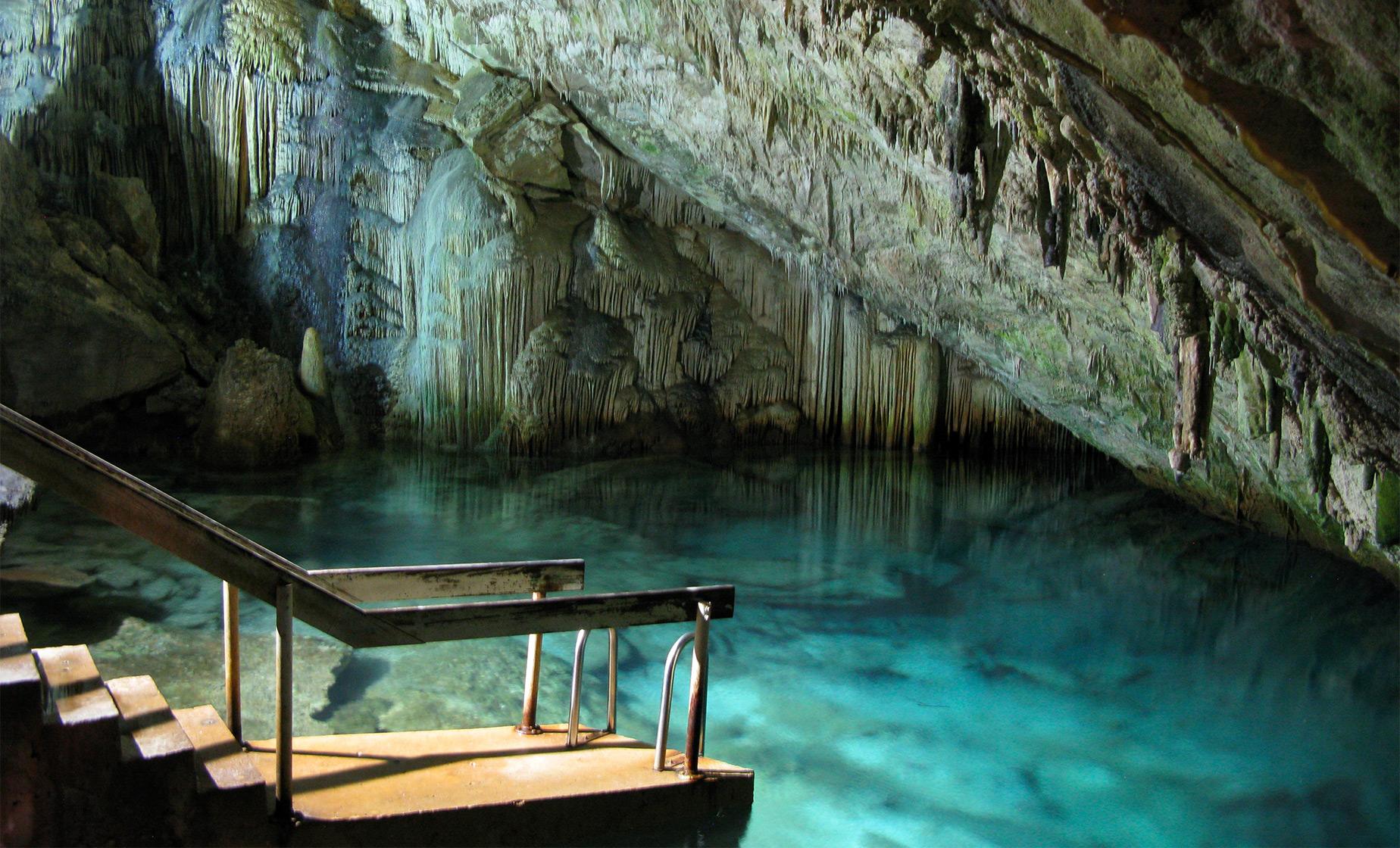 Cruise Ship Pier
Food/Beverage Provided Not Included
Recommended Dress We recommend wearing comfortable, seasonal clothing and closed-toe walking shoes. Guests should bring a light jacket or sweater to wear inside cave. Protective headgear will be provided.
Restrictions Participants should be in good physical condition and free of respiratory and heart conditions. All participants must be able to navigate stairs. This tour is not wheelchair accessible.

Journey into a green cavern of mystery and adventure, and discover a slice of Jamaica's past. Known by several names that describe the cave's use over the years, Green Grotto Caves is a large labyrinth cave system with a rich cultural history. Measuring 1,525 meters in length and 12 meters in depth, the caves are the island's most prominent natural attraction.

From the pier, your guide will take you on an approximately 1 hour scenic drive. Your adventure begins as you make your way through thick vegetation to the mouth of the caves. Descend below ground and be greeted by impressive stalactites, stalagmites, and other unique limestone formations. The ceiling pockets are home to several species of Jamaica's bats, including the Mustache and Jamaican fruit-eating bat. This extensive cave system also boasts a river and Grotto Lake, a crystal clear underground body of water.

Learn of the caves' rich cultural history, starting with the Arawak Indians, whose pottery shards are still unearthed periodically. Learn how the caves were used as a hideout by 17th century Spaniards during the English invasion of Jamaica, and then to smuggle arms to Cuba in the 20th century. At one point the caves were used by runaway slaves, as well as a storage place for rum barrels by the government during the Second World War. If the caves feel familiar to you, it might be because they were also filmed for a scene in the James Bond movie Live and Let Die.

Reserve your place on this adventurous tour now and get ready to experience the underworld of Jamaica.

Recommended Dress
We recommend wearing comfortable, seasonal clothing and closed-toe walking shoes. Guests should bring a light jacket or sweater to wear inside cave. Protective headgear will be provided.

Restrictions
Participants should be in good physical condition and free of respiratory and heart conditions. All participants must be able to navigate stairs. This tour is not wheelchair accessible.

4.8 / 5  |  4 ReviewsReview This Tour
Under ground maze.
I would tell anyone to do this tour.
Reviewer: Shirley Oglesby

Enjoyed this excursion - May 2019
Visited this cave; given hardhats. Guide gave history of pirates hiding rum in these caves; James Bond 007's movie, "Live & Let Die", was also filmed here. Took great pixs; even saw fruit bats hanging above; facinating. Although they say take a jacket due to the coolness as you get lower in the cave; we didn't experience that; it was hot, & I brought a hand fan which was ideal for the climate. It's a vigorating walk/climb up & down steep stairs, but enjoyable to see what wonders lied ahead. I'd recommend this cave/cavern. Great history lesson.
Reviewer: Alycia & Douglas

Jamaican Caves
We had a very good time on this excursion. Our driver was friendly and knowledgeable. He pointed out places of interest along the nearly one hour drive. We were the only two people on this tour! At the caves, our guide was excellent - involved and humorous. There were about 10 people on the cave hike. We even saw a Jamaican boa!
Reviewer: Eileen Oswald