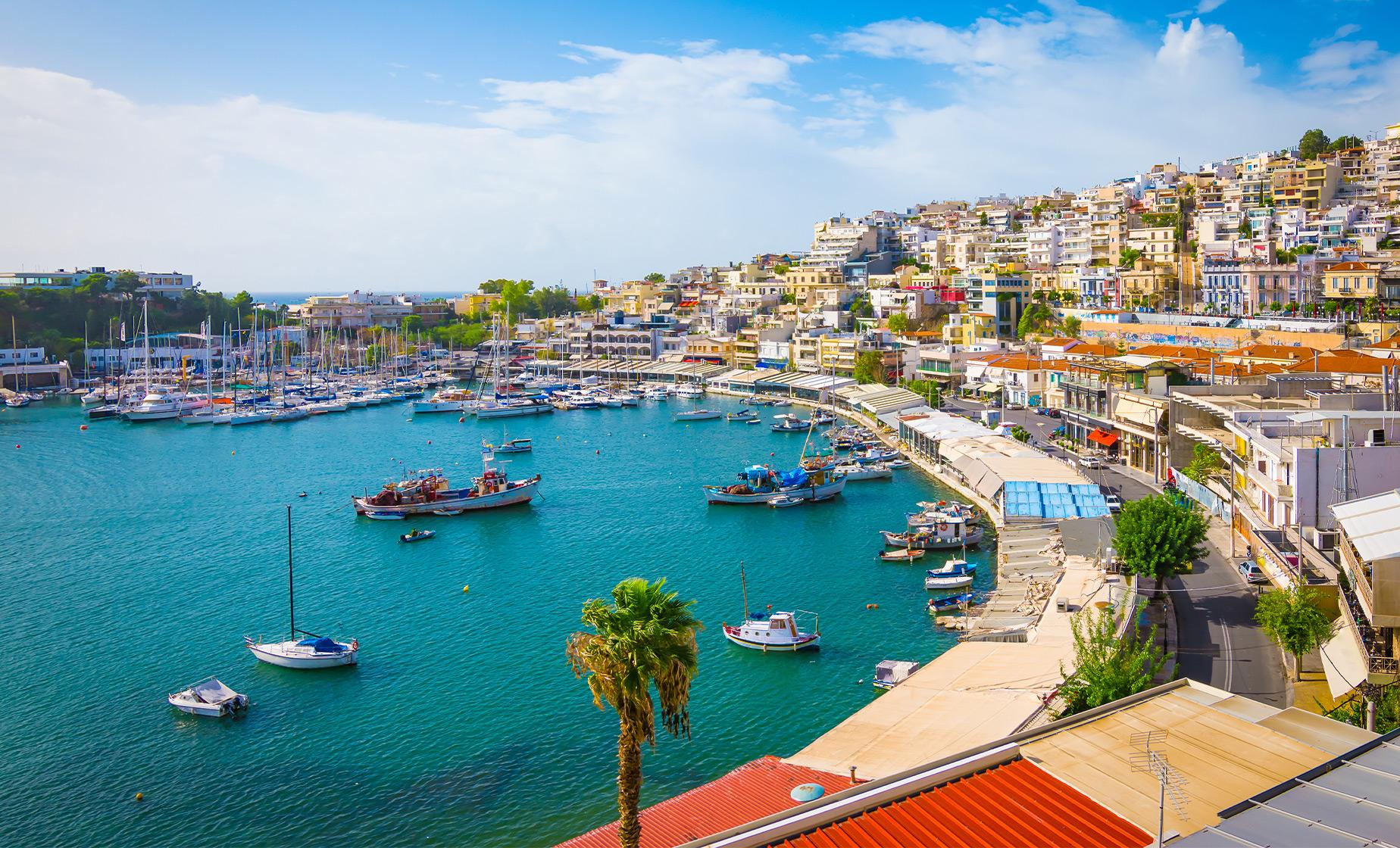 Numerous bus stops throughout Athens. The closest stop is at the cruise ship pier.
Food/Beverage Provided Not Included
Recommended Dress Comfortable lightweight summer clothing and walking shoes are suitable for most of the year. Sunglasses, a hat, and sunscreen are also advised.
Restrictions Guests must be able to get in and out of the bus. This tour is fully wheelchair accessible. Children ages 5 and younger may attend the tour free of charge with advanced notice at the time of booking.

On this hop-on hop-off Athens sightseeing tour, you can travel between Piraeus, Athens, and the Athens Riviera at your leisure, allowing you to view ancient sites such as the Acropolis and Parthenon, as well as world-famous museums. Hop on in Piraeus, the main port of Greece and the biggest port in the Mediterranean, and hop off at any stop to explore on your own!

In Athens, you will experience the contrast between ancient history and modern architecture and culture. Don't miss the stop at the Acropolis, a UNESCO World Heritage Site. Enjoy views of an ancient citadel located on a high rocky outcrop above the city of Athens, which contains the remains of many ancient structures, the most famous of which is the Parthenon. The Parthenon is a temple dedicated to the goddess Athena. This spectacular structure is regarded as the symbol of democracy and is one of the world's greatest cultural monuments. Continue on to enjoy all that central Athens has to offer - hop off the bus to shop, eat, and indulge in Greek culture. This tour provides easy access to the city's best sights and the flexibility to explore as you please.

Travel past the Marina Zea Harbor with its myriad of tall mast ships, schooners and cruisers, and enjoy views of Microlimano Harbor, a pretty fishing port. This is where Themistocles' victorious Triremes were berthed before the epic, history-changing sea battle of nearby Salamis. The archaeological and nautical museums located here are definitely worth visiting. You can also view the Hill of Mars or the ancient court of Athens, the area around the Ancient Agora. Travel down through the Plaka and around the Roman Agora, which includes the famous Tower of the Winds. You'll see it all on this hop-on hop-off tour of Athens.

On the Beaches and Riviera Route, go beach hopping at several of Athens' best beaches, including Vouliagmeni Lake, Agia Kosmas, Asteria Glyfada, and more. You will have the option to enjoy the sun and sand or just take in the scenery - making this Athens tour perfect for everyone.

The Beaches and Riviera Route includes the following stops:

4.3 / 5  |  8 ReviewsReview This Tour
Athens
Very nice way to see Athens especially when you can get a seat at the top of the bus. The narratives in many different languages were great. We felt we got to see all Athens. The staff were pleasant & helpful.
Reviewer: Bernice Breau

Hop in hop off Athens
Great way of getting around the city. Only negative was last bus went back to the port at 1815. Getting a free with the ticket helped quench the thirst.
Reviewer: Eleanor Lord

Hop on
We enjoyed this ride although it was not guided it did get is to where we wanted to go and we toured the area. We really 3njoyed the sights. Next time we will hire a guide once we get to the Acropolis. Well worth the trip.
Reviewer: Julian

PIRAEUS AND ATHENS ROUTES
IT WAS A COOL BUT SUNNY MORNING ON THE TOP DECK OF THE OPEN BUS SO DRESSING IN LAYERS IS HIGHLY RECOMMENDED. WE LEFT THE FIRST BUS NEAR SYNTAGMA SQUARE IN ORDER TO WANDER THROUGH ATHENS WHERE WE HAD VISITED IN 2001. ONCE WE HAD SEEN WHAT WE HAD COME TO SEE AND ENJOY ONCE MORE...INCLUDING A GREAT LUNCH IN THE PLAKA AREA OF ATHENS. WE WERE ABLE TO THEN BUS TO THE MEETING PLACE WHERE WE BOARDED THE PIRAEUS BUS TO THE CRUISE TERMINAL. WE DID NOT TAKE THE BEACH ROUTE WHICH WE HAD PAID FOR BUT THAT WAS OUR DECISION SINCE IT WAS TIME FOR A BEER ON BOARD OUR SHIP.. THANK YOU FOR ORGANIZING THIS...SEG.
Reviewer: William Peter Barton

Really good way to get oriented
Lots of routes, but not all super convenient. Some double back and the transfer point which is out of the way is at the Parthenon. Other than that - great way to see a fair amount and decide what you want to circle back and get off and see. Good price though!
Reviewer: Cheryl Sims

Sightseeing
We enjoyed the hop off bus. Very good way to see a city. The narrated info was helpful. The people at the stops that helped us get to where we wanted was a great service. Many of the drivers did not speak English
Reviewer: Donna