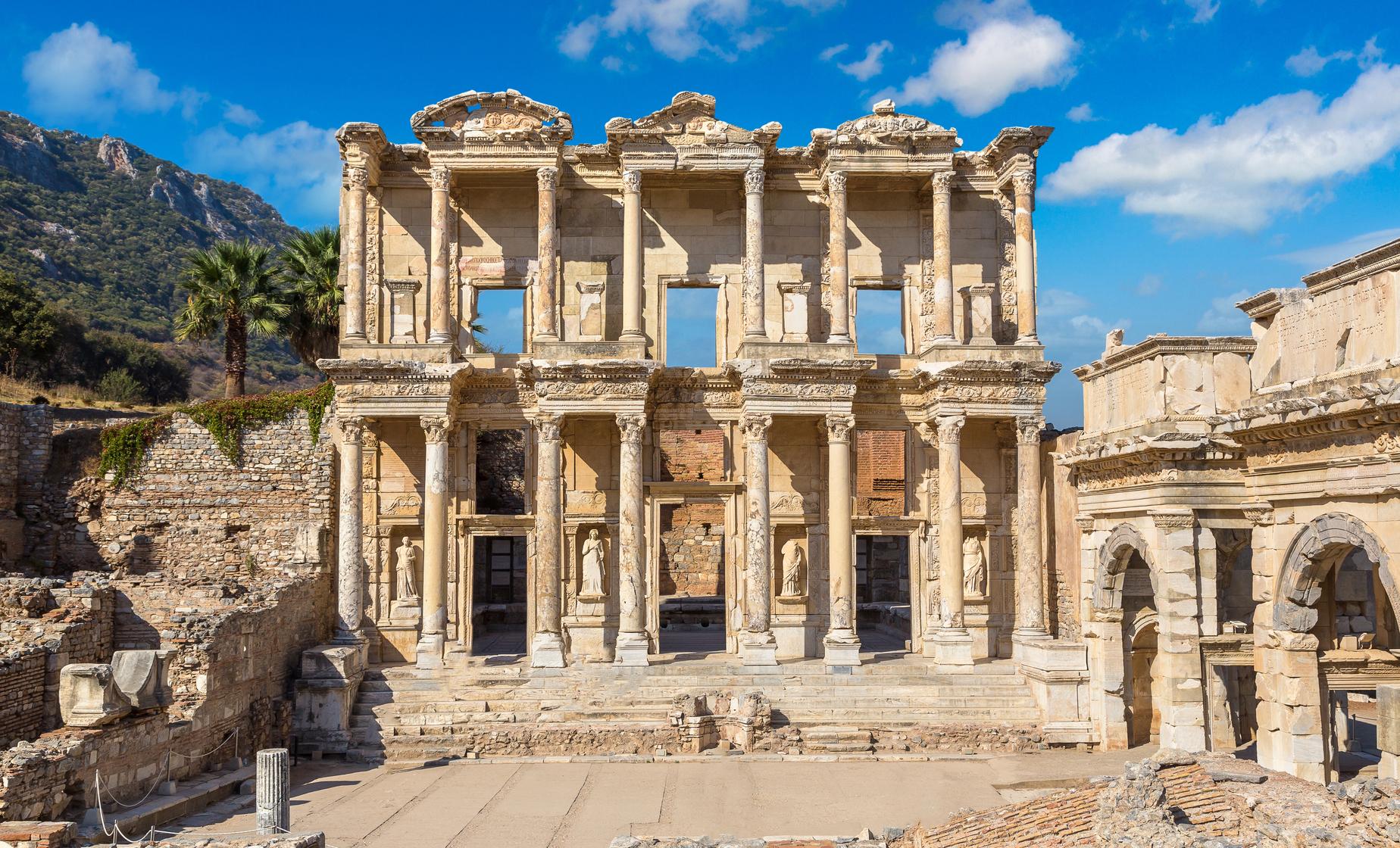 4.0 / 5  |  2 ReviewsReview This Tour
From $116.00/person to $318.00/person (Select "Individuals" below) Price varies based on number of individuals in your group
Choose Options My Cruise Itinerary
Summary
Shore Excursion Size

Cruise Ship Pier
Food/Beverage Provided Lunch
Recommended Dress Comfortable clothing and and sensible walking shoes are recommended. Sun glasses and sunscreen are suggested.
Restrictions Guests must be able to walk over packed dirt, cobblestone and rock pavements. Many of these are uneven. Steps are required at various points at all sites.

After meeting your private, professional guide at the Kusadasi pier, you will begin your full-day private shore excursion and head to the ancient city of Ephesus. Here you will explore this historic, fascinating destination with your private guide and marvel at the sights of the Odeon, the Upper Agora, the Fountain of Trajan, the Steam Baths of Scolastika, the Temple of Hadrian, and the impressive Library of Celsus, considered one of the most magnificent ruins from the ancient world. Your guide will bring these sites to life. The Grand Theater, where St. Paul preached to the Ephesians, was until recently still used for performances.

Next, you will set off to the ancient city of Miletus, which is approximately 45 minutes from Ephesus. As you drive through the Turkish countryside, you will see small villages, orchards and farms, many of which raise Turkey's prized cotton. Miletus was one of the biggest cities in ancient Anatolia. Miletus is perhaps most famous for its great philosophers and architects, such as Thales, Anaksimandros, Hippodamos and Isidoros. Miletus is also famous for the Faustina Baths. Although it has not been restored or studied to the extent that Ephesus has, it is still an important look into the life of this ancient civilization.

You will then visit the archeological site of Didyma, which is not an ancient city, but a sacred place of worship. Didyma's fame rests on the magnificent Temple of Apollo, a building of awesome scale whose proportions seem more in keeping with the gods than man. Building works in the name of Apollo were started in the eighth or seventh centuries B.C. The Persians, who attacked the area in 494 B.C., destroyed the temple. Alexander the Great helped in the rebuilding and the remains we see today are Hellenistic, dating from his times. In the temple's reconstruction, the original foundations were used but the size of the building was greatly increased. While in Didyma, you will have a traditional Turkish lunch.

At the conclusion of your private cruise excursion you will return to Kusadasi along the same route taken in the morning. If time allows, guests will have the option to end their tour in the shopping area where they can attend a Turkish carpet explanation and shopping, explore the shops filled with jewelry, carpets, leather ware, and copper goods, or both. Turkish salespeople expect you to haggle and quite often you can get 10-15% off the listed price. Treat it as an adventure. The cruise pier is a 5-10 minute walk from the main shopping area. Guests not wishing to attend the optional carpet shopping should advise their guide and they will be taken directly back to the pier.

4.0 / 5  |  2 ReviewsReview This Tour
We had a great time
Overall, a wonderful experience and an excellent value. The guide was a wonderful person. He was very caring in helping us across rough ground and protecting us from injury. The tour would have been perfect if he spoke with less of an accent. Our old ears did miss some commentary.
Reviewer: Jerry

A good private tour
We took this tour (Private Ancient Ephesus, Miletus and Didyma) mainly to see as much of the historical sights near Kusadasi in a day excursion and to avoid the crowds as much as we can. Our competent guide named Mersut did a wonderful job of doing both. To avoid the cruise ship crowds, we initially went in the morning to Miletus, then to Didyma, then a great lunch, followed by an afternoon tour of Ephesus. This worked out very well. The ride in a nice mercedes van was very comfortable. Mersut knew a lot about the ruins. He was both educational and entertaining. The only down side of this tour was the price, which we thought was a little high.
Reviewer: N and R