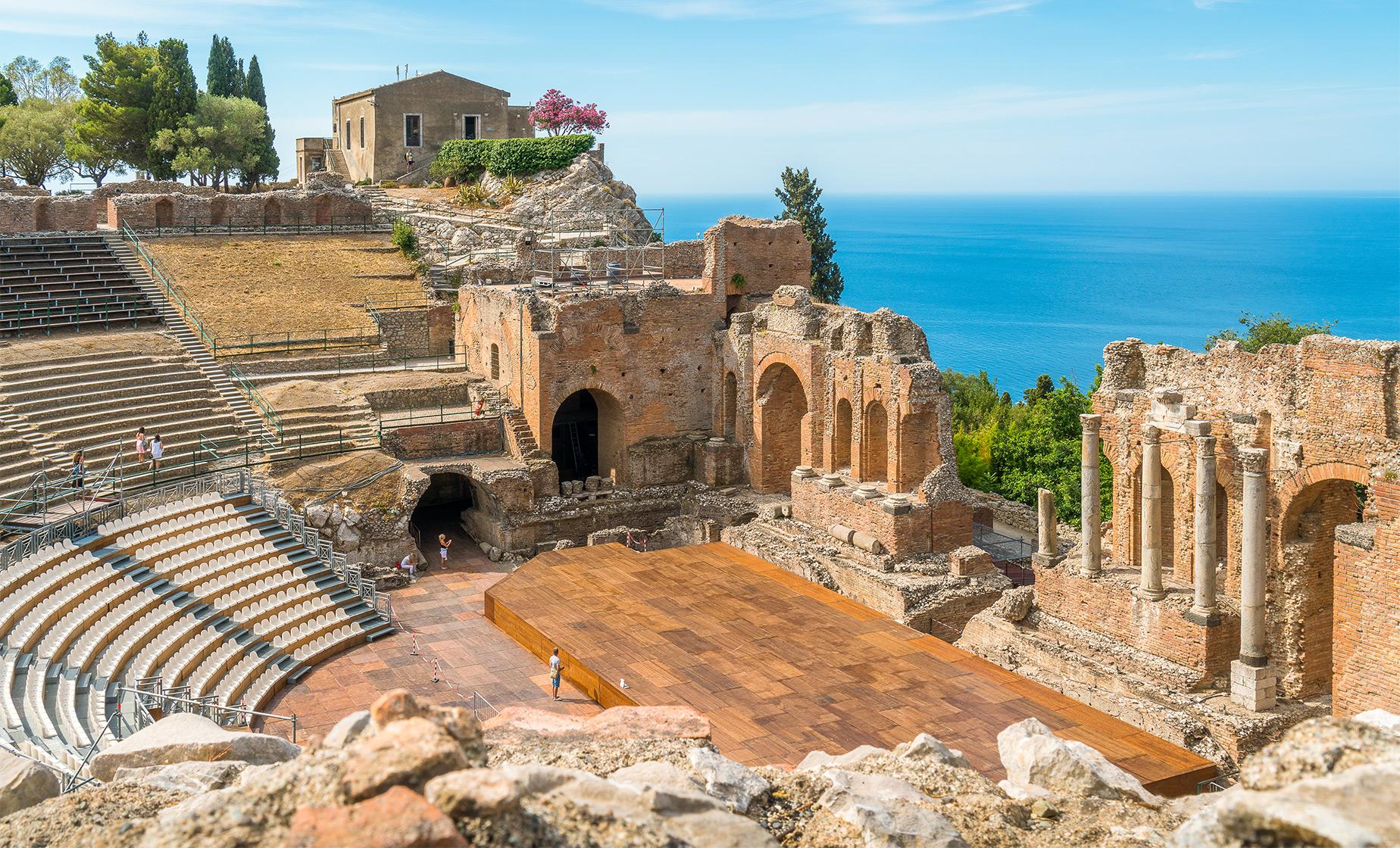 Cruise Ship Pier
Food/Beverage Provided Not Included
Recommended Dress We recommend wearing comfortable, weather appropriate clothing and sensible flat-soled walking shoes. You may wish to bring sunscreen, sunglasses and hat.
Restrictions Guests must be able to get in and out of transportation. This tour can accommodate a collapsible wheelchair, but guests will have to walk short distances and it is suggested they be accompanied for assistance. As this is a walking tour, guests with any mobility issues should reconsider this excursion.

Mount Etna is the tallest active volcano in Europe and is in an almost constant state of activity. Standing more than 3,300 meters (10,922 feet) high, the fertile volcanic soils support extensive agriculture, with vineyards and orchards spread across the lower slopes of the mountain and the broad Plain of Catania to the south. Due to its history of recent activity and nearby population, Mount Etna has been designated a Decade Volcano by the United Nations. In June 2013, it was added to the list of UNESCO World Heritage Sites.

On this Mount Etna tour, you will take a scenic ride out to the slopes at the base of this magnificent mountain. Along the way, you will pass through the village of Zafferana Etnea on the southern side of the volcano, for stunning views of Mount Etna and the coastline below.

From there you will head to Sapienza refuge, a popular tourist spot, where you may observe climbers who have come to Etna wishing to scale the mountain. After a short break, continue to Silvestri, two inactive craters that were formed from the 1892 eruption. Grab photos of the amazing lunar-like landscape, before making your way back down the mountain to the picturesque village of Taormina.

Here you will discover a 3rd century Greek theater, the largest in Sicily after Syracuse. Walk along Corso Umberto, formerly the ancient Roman street Valeria, to see exclusive shops, famous restaurants, monuments and more. Make sure to pop in at the historical center of Messina to see the Church of the Catalans and the cathedral square with the largest astronomical clock in the world.

Book this special tour now to get up close and personal with Mount Etna and enjoy a fun introduction to beautiful Taormina.

Restrictions
Guests must be able to get in and out of transportation. This tour can accommodate a collapsible wheelchair, but guests will have to walk short distances and it is suggested they be accompanied for assistance. As this is a walking tour, guests with any mobility issues should reconsider this excursion.

4.7 / 5  |  6 ReviewsReview This Tour
Good tour
Good tour, enjoyed Mt Etna - Taormina was very touristy and crowded. Stopped at a little place that sold honey and wine, would have preferred to spend more time there.
Reviewer: Lynn

Incredible day at Mt Etna & Taormina
Small van was way more intimate than riding on a bus to Mt Etna. Was great to have food & beverages on site after climbing up & down the mountainside. The higher elevation was a lot cooler, making it quite easy to climb to higher elevations. what an incredible view. Taormina was picturesque. Beautiful view of the shoreline below. Plenty of places to eat & shop in the narrow streets of Taormina.
Reviewer: James & Jackie Bates

Our favourite tour of the trip!
Absolutely our favourite excursion of the trip. Guides were friendly and knowledgeable. Our guide had a few fun surprised planned which exposed us to local (tasty) traditions.
Reviewer: Yvonne Gibbons (Noseworthy)

TOUR FROM 8;30 TO 4
THROUGH NO FAULT OF DISCOVER MESSINA GUIDE CECILIA AND DRIVER PAUL THIS WAS A BIT OF A TOUGH DAY FOR THEM AND FOR THE 4 OF US...2 AUSSIES AND 2 CANADIANS. THE REASON WAS THAT THE WEATHER WAS FAIRLY ABOMINABLE WITH COOL AND PERSISTANT RAIN AS THE DAY PROGRESSED AND THEN SNOW AND FOG AS WE MADE OUR WAY UP TO MOUNT ETNA. ONLY ONE CRATER WAS VISIBLE IN THE WET AND DREARY CONDITIONS. WE MADE THE BEST OF IT AND THEN HEADED TO TAORMINA WHERE THE RAIN THOROUGHLY SOAKED ANY PART OF OUR BODY NOT COVERED BY PLASTIC OR RUBBER. THAT TOWN WAS WORTH TOURING WHETHER IT WAS RAINING OR NOT BUT FINDING A RESTAURANT THAT WOULD ACCEPT OUR WETNESS WAS A BLESSING...AS WAS THE PIZZA. CECILIA WAS AN EXCEPTIONAL GUIDE UNDER THE MOST ADVERSE CIRCUMSTANCES. OF COURSE, THE DAY BEFORE OUR VISIT AND THE DAY AFTER WERE GORGEOUS AND FREE OF PRECIPITATION. NEVERTHELESS, THE MEMORIES ARE POSITIVE. THANK YOU SEG.
Reviewer: William Peter Barton

Sicily
The tour of Mount Etna and the charming town of Taormina was spetacular. We had no idea what to expect in Sicily. The seaside drive was unbelievable. We walked all over charming Taorimina, touring the shops and looking down the cliff face to the sea. The mountain landscapes were beautiful. We drove to the base of the aerial lift up Mount Etna, then rode the lift to near the top. The views of the spewing volcano and the scenery below were great.
Reviewer: Bruce and Maren Kleven

Mt Etna/Taorimina
We had a wonderful experience with our tour guide. Her enthusiasm made us fall in love with Sicily. It was a wonderful day of small hiking at Mt Etna, sampling of oils and fire water(Mt Etna style) and the lovely town of Taormina. I want to go back to this lovely area. Thank you it was a highlight of our cruise.
Reviewer: Karen Kowalski