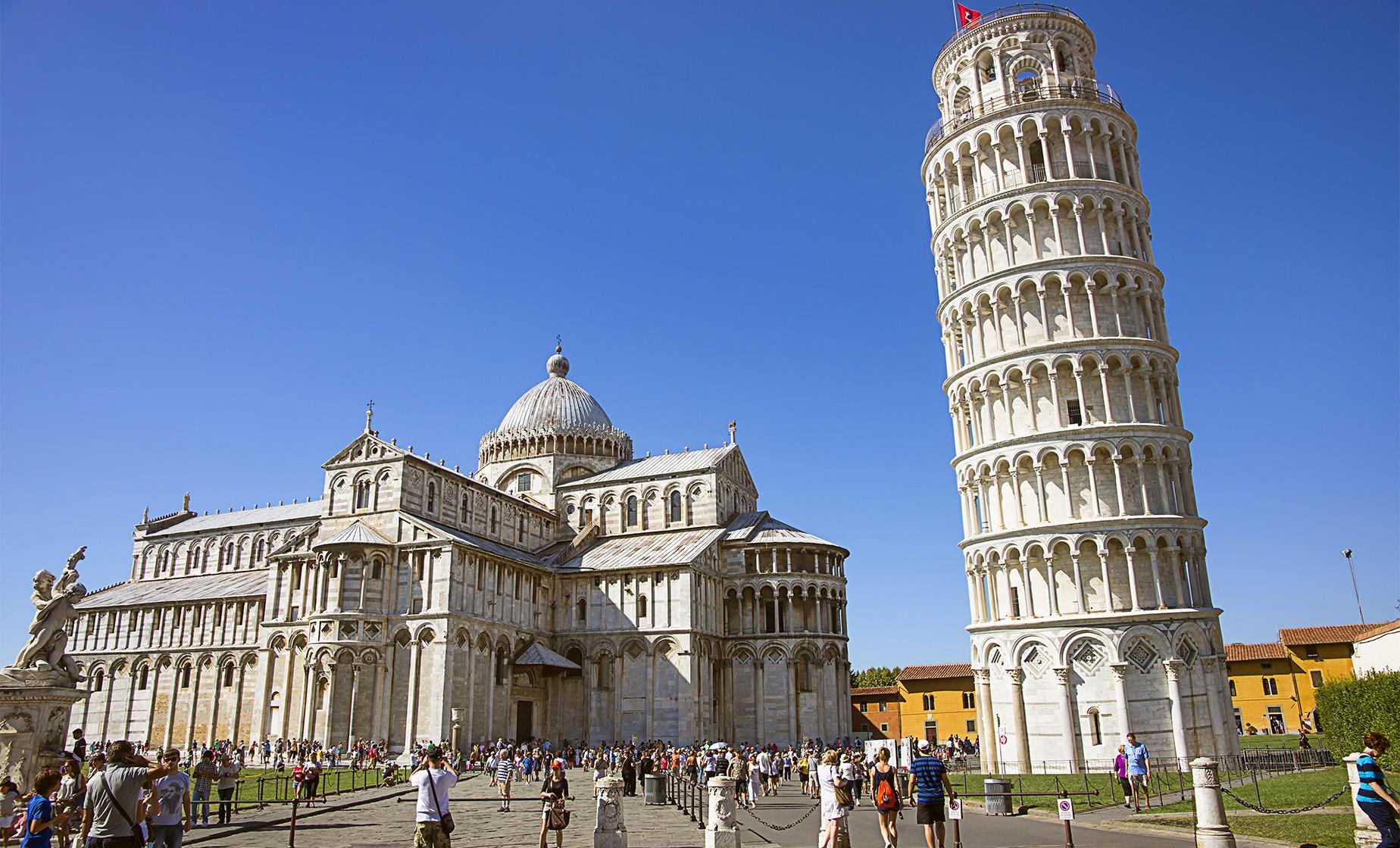 An approximately 10 to 15 minute shuttle ride (not included, approximately 5 EUR per person) is required to reach your departure location.
Food/Beverage Provided Not Included
Recommended Dress Comfortable seasonal clothing, sunscreen and sunglasses. Rain protection if necessary. Camera for photos.
Restrictions Guests must be able to step in and out of the vechicle. This tour can accommodate a collapsible wheelchair or walker with advanced notice at the time of booking.

Pisa At Your Own Leisure

On this Pisa tour, enjoy the flexibility to explore the legendary Tuscan city at your own leisure. You can visit the Quartiere della Venezia (a grand Synagogue), the Cathedral (a Baptistry), and the famed Leaning Tower. Your excursion to Pisa straddles the Arno River and will leave you both amazed and intrigued. This Livorno excursion is great for those wishing to experience Pisa on their own.

Depart from Livorno and arrive in Pisa via coach. Upon arrival, you will exit your coach and begin a 10-minute walk to the Piazza dei Miracoli (Square of Miracles), which was declared a UNESCO World Heritage Site in 1987. It is also considered one of the finest architectural complexes in the world and is held as a sacred site by the Catholic Church.

The first edifice to admire is the Cathedral, entitled to Santa Maria Assunta (St. Mary of the Assumption). Construction began in 1064 AD, a Romanesque structure exposing a facade of grey marble and white stone with massive bronze doors leading to its narthex.

Dedicated to St. John the Baptist, the Baptistry stands on the west side of the Cathedral at the Piazza dei Miracoli, dating back to the 12th Century AD. Being the largest Baptistry in Italy, its circumference measures 107.25 meters. It is an immense structure, resembling a crown.

The most notable building at the Piazza dei Miracoli is the Cathedral's bell tower, known as the Leaning Tower of Pisa. As the last of the three major edifices to be built here, construction began in 1173 AD and took 177 years to complete. Five years into construction, the subsoil proved to be weak and the tower began to lean. After a century long hiatus to allow the subsoil to correct itself, construction resumed and finished in 1319 AD. As of 2010, the lean was measured to be 4 degrees. You will definitely want to bring your camera to capture this world landmark.

Later on, you may have the opportunity to visit Livorno, the Quartiere della Venezia, known for its canals and Renaissance styled churches. Venture into one of the largest outdoor markets in Europe, which is closed in the afternoon due to the midday sun.

Another noteworthy site you may be able to see is the Synagogue, which was recently reopened after an eight year restoration project. Originally built in 1595, it was restructured in the 1860s by the architect Marco Treves. If you have a chance to visit this venerable Jewish site, it will leave you contemplating the history of the ancient and modern religion.

After your tour of Pisa, you will be driven back to Livorno to return to port with fond memories. Book this Pisa tour today for a comprehensive Italy excursion.

Please note: This is not a guided tour, it is a round trip transfer from Livorno to Pisa. Guests will be given a certain amount of time to sightsee on their own, without a guide, before heading back to Livorno. Entrance fees to attractions/museums are not included in the price of this tour.

4.5 / 5  |  10 ReviewsReview This Tour
Pisa
Would like to have known about the walking ahead of time.
Reviewer: Leilani Palmer

Pisa At Your Leisure
A must see.
Reviewer: Audrey

Awesome!
One of my favorite sights! Thank you BJ's
Reviewer: Victor A Ceglie

really just a transfer
this excursion is really just a transfer to Pisa. We also had to buy a shuttle transfer ticket from the ship to the city to meet up with our coach. After arriving in town, there were several people with signs for different excursions, it was easy to find ours. We had to wait for the bus, but once it arrived it was an air conditioned and comfortable ride. Getting off the bus- look for the pedestrian walkway signs. It took about 15 minutes to walk to the tower. The "salesmen" are relentless here, but there is some good souvenir shopping just outside the tower. It would have been easy to arrange this transfer on the day, there were staff members selling transfers and tours at the cruise terminal, but it was nice to have it pre arranged and just hop on. don't forget to print your ticket!
Reviewer: Martha A

Pisa at your Leisure
The bus trip to Pisa was comfortable with interesting commentary.We had a 10 minute walk from where the bus parked to the location. We had little over two hours to take in the Leaning Tower and Cathedral, this was ample. There were lines of interesting market stalls, plus ample cafes with great food and drinks. Rest rooms were hard to find, used one at a cafe - that's ok as long as you make a purchase. All-in-all it was a wonderful day, would most certainly recommend.
Reviewer: Alan Laskey