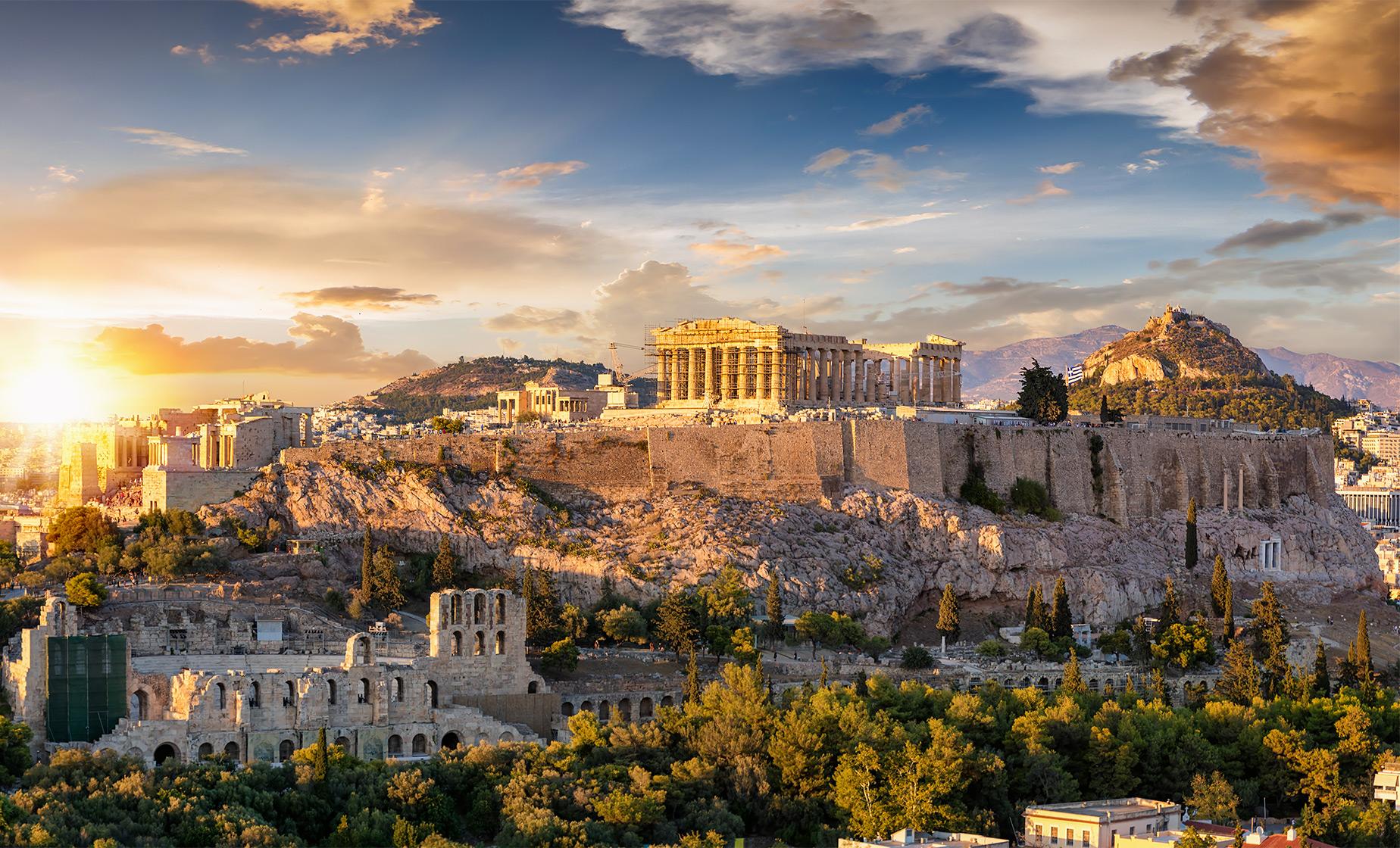 Cruise Ship Pier
Food/Beverage Provided Not Included
Recommended Dress Comfortable clothing and sensible, flat-soled walking shoes are recommended. Sunglasses and sunscreen are suggested.
Restrictions To climb up to the Acropolis, guests must be able to walk over paved, inclined paths, some with steps, then climb a series of steps to reach the propylaea. The walking surfaces on top of the Acropolis are uneven. The Plaka is predominately paved surfaces, several with slight inclines. Children ages 12 and under can participate in this tour free of charge; however, all children must be accounted for at the time of booking.

The Acropolis of Athens is recognized as the culmination of Greek architecture, art, and sculpture. During your visit to the Acropolis (from Greek meaning above the city), you will view The Parthenon, constructed between 447-432 B.C. as a temple dedicated to the goddess Athena. Its main function was to shelter the monumental statue of Athena which was made out of gold and ivory. You will see the Erechtheon, started in 420 B.C. as a temple for religious rituals; the Propylaea, the monumental entrance to the Acropolis which blends Doric and Ionic building principles; and the small temple Athena Nike, which stands on a protruding mass of rock, protecting the gate to the citadel.

Bordered by the Acropolis to the south and the Ancient Agora to the west, the Plaka is the historic heart of Athens. Blending with the adjacent Monastiraki district, the Plaka area seems to have a little of everything, from the ancient ruins of a Roman forum, the Greek Agora, and Byzantine-influenced churches, to restored 19th-century neoclassical homes and modern-day stores, boutiques, and cafes sprinkled throughout.

The Plaka area is home to several nearby museums including the Benaki, Kanellopoulos, the new Acropolis, and the Greek Folk Art Museum, to name a few. For shopping, you will find Greek souvenirs and clothing, as well as jewelry shops. Greek gold jewelry is often better priced than in other European countries as the labor cost is lower.

Due to crowds, traffic, or other conditions out of our control, the order of the tour itinerary may be changed but will still cover the mentioned sights.

Athens with Plaka
This excursion is ideal for someone who wants to visit the Acropolis and the surrounding history with limited time available from the cruise we were a group of 14 people and booked it online it was a lot cheaper then the one offered by the cruise the guide was good as well although there was a group of 25 she handled it well I would recommend this excursion
Reviewer: Mukesh G Patel

wonderful experience
We would highly recommend this tour. It was wonderfully informative. Our tour guide was amazing. We learned so much about Athens and the Acropolis.
Reviewer: Kiima

Acropolis and city sightsTour
We very much enjoyed this tour. Guide was great, tons of information and insights to this region. Pick up at the cruise terminal was super easy everything on time.
Reviewer: Chrish

Spectacular
Finally. After studying Architectural Drafting 50 years ago always wanted to visit Greece. Especially the Parthenon. Overwhelming! Finally off my bucket list! Was really nice avoiding all the lineups too. Guide was incredibly knowledgeable. The Plaka was great. Lots of little shops with almost anything you want. Restaurants galour! Since I wasn't going back to the ship she helped me get a cab that took Visa. Thank you!
Reviewer: STEPHEN MACDONALD

It was great!
Although I can't remember our tour guide or driver's names, we had a wonderful tour of Athens on August 10, 2022. Even the drive through Athens on the way to the Acropolis was informational and we made several stops, including at the Olympic stadium of the first modern games. The knowledge of our tour guide at The Acropolis was incredible, as well as her knowledge of the Old City. We had an amazing time and learned so much!
Reviewer: Cindy Thomson