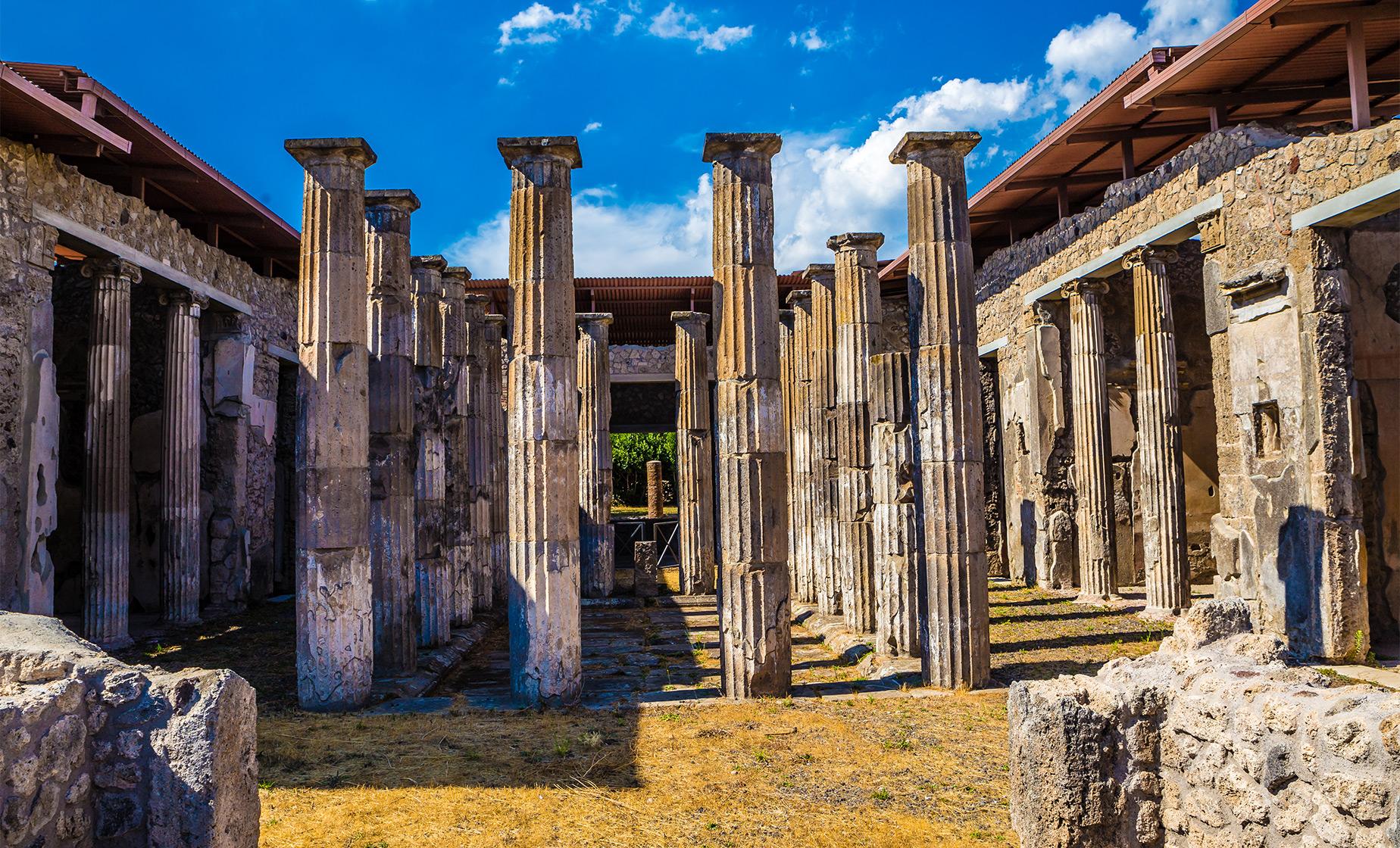 5.0 / 5  |  6 ReviewsReview This Tour
From $139.00/person to $895.00/person (Select "Individuals" below) Price varies based on number of individuals in your group
Choose Options My Cruise Itinerary
Summary
Shore Excursion Size

Cruise Ship Pier
Food/Beverage Provided Not Included
Recommended Dress We recommend wearing comfortable clothing and sensible, closed-toe walking shoes. Sunscreen and sun glasses are suggested.
Restrictions Guests must be able to walk approximately 2.5 miles over cobblestones and uneven surfaces, steep inclines and steps at Pompeii. At Herculaneum, there is a sloped path to reach the site, and cobblestones and steps to access the buildings. The tour itinerary may be reversed but always covering the mentioned sights. Heavy traffic congestion should be anticipated and may affect the duration of the excursion. >

Travel to Herculaneum and Visit Pompeii

After meeting your private guide for your Naples shore trip, you will depart the pier, and travel to Pompeii. Once a major port, as well as a center of wealth and politics, the city was instantly buried beneath 30 feet of volcanic ash and cinder when Mt. Vesuvius erupted in 79 AD. This ancient site is perhaps the most famous archaic excavation in the world. At its peak, Pompeii was home to 20,000 people and it is believed that 2,000 of them perished instantly when volcanic ash poured down on the city, creating ghostly casts formed by bodies that were encased and incinerated in the hot ash. Walk along intact streets and inspect prominent mansions, private homes adorned with mosaic floors, brilliant frescoes and other works of art, all of which provide an impression of Roman life as it was 2,000 years ago.

In the afternoon, travel to Herculaneum. Founded in the 4th century B.C., it architecturally mirrors Naples' old city center. Smaller than Pompeii, Herculaneum's character is completely different. Because of an earthquake in 63 AD, many of the affluent inhabitants left before the eruption in the following decade. Therefore, Herculaneum has none of the eerie body casts found at Pompeii. Since it was buried in mud, the opulent homes were well preserved. The mosaic at Casa del Nettuno de Anfitrite, for example, still shows intense color. The deities adorning some of the private baths and fountains are so vivid, scenes from an ancient era spring to life. At the two-story House of the Deer, paintings and furnishings reveal wealth and opulent lifestyles. After your visit, you will return along the peninsula to Naples.

Please Note : Entrance fees to Pompei and Herculaneum are included.

5.0 / 5  |  6 ReviewsReview This Tour
Herculaneum is even better than Pompeii
Great tour. Our guide took us to Herculaneum first which was a terrific decision. We were some of the first people through the gate and felt like we had it all to ourselves. While we enjoyed Pompeii as well, Herculaneum was a totally different experience with much more intact buildings. You could still see elaborate mosaics. It's a smaller site and easier to get around. Pompeii has the casts and buildings that show you how large the city was at the time. It was also fascinating, but it is much larger and much more crowded. Great experience with a very informative, engaging guide. Highly recommend it.
Reviewer: Martha

We enjoyed this tour very much!
Our guide was excellent, knowledgeable, and helpful. Suzi has an obvious passion for Pompeii and Herculaneum, and it shows. We saw Herculaneum first and got there early in the day so there were no crowds. These two places are such a wonderful way to experience what ancient Roman life was like. Pompeii did have a lot of visitors, so some areas are crowded, but still fascinating to see. Our guide spoke very good English, and kept us interested for the whole tour. For us, the cost of the "private" tour was definitely worthwhile.
Reviewer: J Carlson

Phenomenal tour!
Met at the dock by a chauffeur-driven Mercedes and a very knowledgeable professional tour guide with impeccable English. Fabulous tour of Pompeii, followed by a nice lunch. After lunch we were given a splendid tour of Herculaneum. This was the best excursion of any that we booked during our Mediterranean cruise.
Reviewer: JANICE FOGG

Pompeii/Herculean - 9/11/16
This tour was excellent. The guide was very informative, interesting and you could tell has a tremendous passion for his work Please pass this on
Reviewer: Alan Thomas

Our best excursion this cruise!
We were very lucky to be the only two customers for this tour. We had a Mercedes limo with driver and a very competent and considerate guide. She adjusted the pace for my wife to keep up with us. It was great to see Pompeii and Herculaneum in the same day and compare the two sites. Guide was very knowledgable and friendly. Other travelers should be so lucky!
Reviewer: world traveler

So worth it to have a private tour of these two an
Had waited many years to see Pompeii and Herclaneum and Frederica made this excursion worth every bit of the long wait. We felt immersed in the ancient cities and their former inhabitants and were given so many insights into the lives and histories of these Roman citizens. Only a longer day and more than the five hours would have allowed us to see more of the excavated cities. It will have to wait for another visit.
Reviewer: Rose the Neapolitan