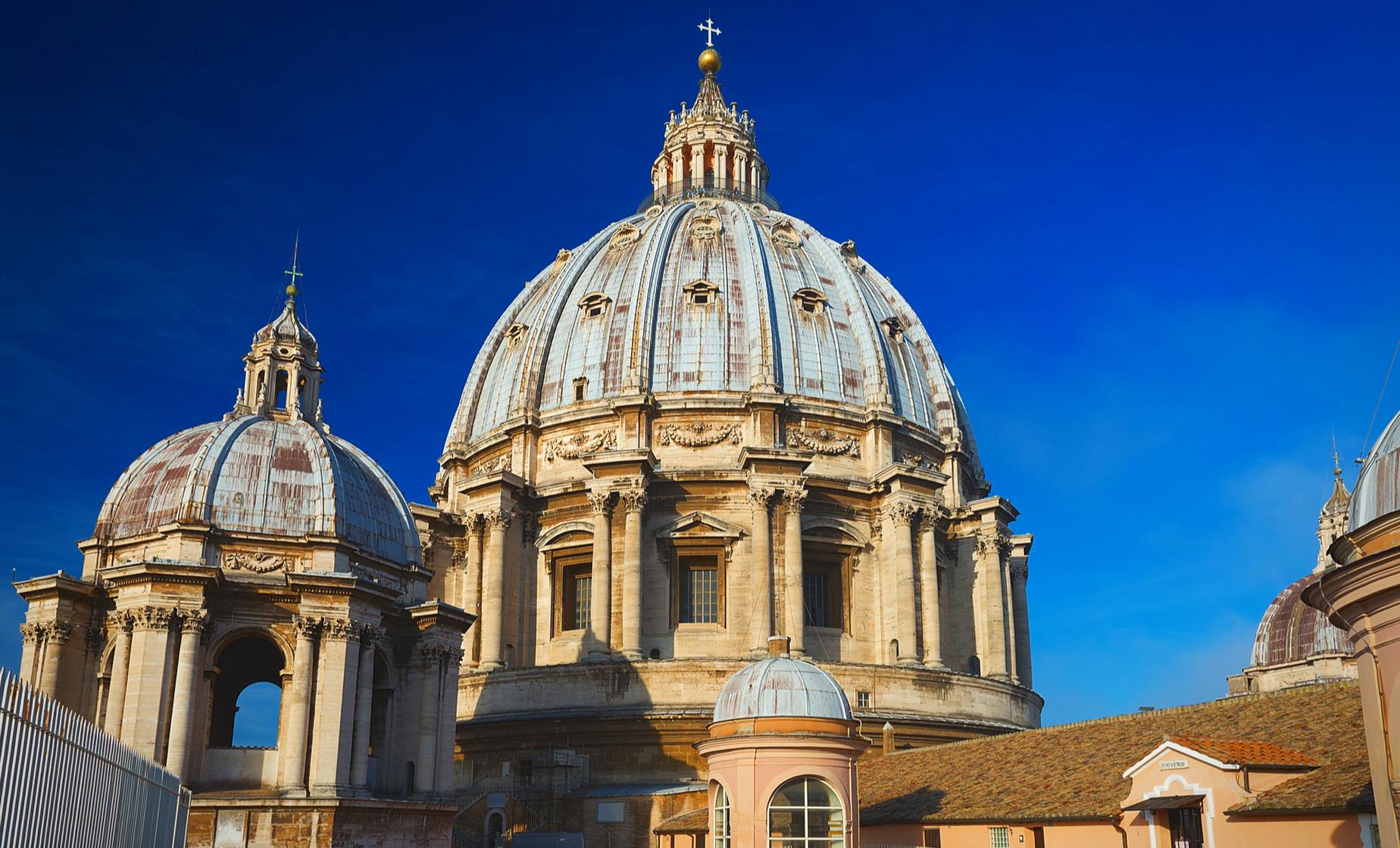 4.9 / 5  |  11 ReviewsReview This Tour
From $185.00/person to $1,025.00/person (Select "Individuals" below) Price varies based on number of individuals in your group
Due to regulations at the Vatican Museum, additional information is required to book this tour. Please see the note at the bottom of the tour description.
Choose Options My Cruise Itinerary
Summary
Shore Excursion Size

The Cruise Ship Pier.
Food/Beverage Provided Not Included
Recommended Dress A strict dress code is enforced in the Vatican Museum (Sistine Chapel) and St. Peter's Basilica. Short pants, tank tops, and revealing clothing is not permitted. Shoulders and knees must be covered.
Restrictions Guests will be required to check large bags, backpacks, large video cameras and water bottles at designated check points. As you will exit the Vatican on the other side of the city, we recommend you do not bring any of these items. Flash photos are not permitted in the Vatican Museum. Video and photography are not permitted at any time in the Sistine Chapel. Pre-reserved tickets are non-refundable after tour is confirmed. Please be aware that the Basilica may close for security reasons at any given time without previous notice. In case this occurs, free time will be provided to compensate or additional time at the Vatican Museum. Infants up to 24 months can be considered a lap child and sit on the parent's lap during the tour. They will not be charged, but will need to be accounted for at the time of booking.

An incredible museum of artwork, Michelangelo's celebrated Sistine Chapel and the world's largest domed church are all located in one of the smallest countries in the world. This full-day Civitavecchia tour will show you this wealth of treasures.

Meet your driver on the pier for the approximately one-hour drive to the Vatican City. Upon arrival in Rome, you will meet your professionally trained, licensed tour guide and begin your visit of Vatican City, the smallest state in the world.

Within Vatican City is the Vatican Museum. The museum is made up of over one thousand rooms and galleries containing a multitude of amazing treasures collected by popes throughout the centuries. It would take days to even scratch the surface. With your private Civitavecchia tour guide and priority entrance you will avoid the long lines outside and be able to spend more time in the museum itself. You will have time to see some of the most important galleries and outstanding museum pieces but please be aware that you will only see a portion of the museum, and that crowds are to be expected.

At the end of the museum is the Sistine Chapel which can only be reached by a staircase. Built between the years 1473 and 1481, it is the best-known chapel in the official residence of the Pope in Vatican City. Part of its fame rests on its architecture with internal measurements of 134 feet long by 44 feet wide, the dimensions of Solomon's Temple as given in the Old Testament. Adding to its fame is its decoration, with frescoes throughout by the greatest Renaissance artists including Michelangelo, Bernini, Raphael, and Botticelli. Under the patronage of Pope Julius II, Michelangelo painted 12,000 square feet of the chapel ceiling, 68 feet above the floor, between the years 1508 and 1512. Although he resented the commission, today the ceiling, and especially "The Last Judgment," are widely believed to be Michelangelo's crowning achievements in painting.

From the chapel, a staircase leads you past the long lines waiting to enter the Basilica from St. Mark's Square to your last visit in the Vatican City, St. Peter's Basilica. The Basilica has the largest interior of any Christian church in the world, holding 60,000 people. It is regarded as one of the holiest Christian sites in the world. It is the burial site of its namesake Saint Peter, who was one of the twelve apostles of Jesus. Catholic tradition holds that Saint Peter's tomb is below the altar of the basilica. There has been a church on this site since the 4th century.

Based on the design of Donato Brumante, the current building's foundation stone was laid on April 18, 1506. Five other designers and two additional popes would be involved before Michelangelo, then in his seventies, was forced to become the designer in 1547. He is the man considered the principle designer of a majority of the present-day building's interior as well as the man who finally got the construction moving forward. After he died, it would take 60 more years and several more designers to see it finished. Among the many fine pieces of art and mosaics on display are Michelangelo's "Pieta" and the beautifully carved Bernini Pulpit.

After your visit to the Vatican City, your private guide will bid you farewell and you will have approximately two hours at leisure with your private driver for additional touring, shopping or dining. At the appointed time you will make the return drive to the port.

Please Note: Due to regulations at the Vatican Museum, the guest booking the tour (lead guest) must provide his or her full name, place of birth, and date of birth, matching the information in his or her valid passport, at the time of booking. The lead guest must also present his or her passport to the Vatican officials upon arrival at the museum. This ONLY applies to the lead guest, not every guest in the group. The lead guest must also provide the full name and age of all participants at the time of booking, and this information must match the information in their valid passports. Please be aware that the Basilica may close for security reasons at any given time without previous notice. In case this occurs, free time will be provided to compensate or additional time at the Vatican Museum.

The driver does not speak fluent English and is not a guide for your Rome tour.

4.9 / 5  |  11 ReviewsReview This Tour
Vatican tour review from Costco
There were 8 of us in this tour and 5 as family members. Thomas as we call him for short is punctual. He was very polite and receptive and he drives a Volswagen Van that is clean and presentable and comfortable. He took us to Florence first to visit Leaning tower of Pisa while there's no traffic. Thomas is young and English is not fluent bu understandable. His not very knowledgeable but very good driver and tries to give us information and apologizes if he's not sure of the answer. He then dropped us for a visit in France and our tour guide is Viola who is very informative. Thomas picked us up after 2 hours in France and got caught in traffic but we had plenty of time before we get back in our ship.
Reviewer: marilou matsuda

WOW!
Our driver was fun & really knew how to get around and take us to many additional places! Our Vatican tour guide was extremely knowledgeable! We enjoyed this excursion very much & would highly recommend!
Reviewer: Diane M Pierce

Excellent private tour
This tour was the high-light of our trip. We were picked up at the pier. Being a group of 10, we had our own mini bus with driver and guide. We visited the Colosseum, Pantheon, Trevi Fountain, Forum, etc. Another tour guide showed us the Vatican. Both guides and the driver were excellent. I would highly recommend this tour.
Reviewer: Nora Chow

Excellent excursion in Rome
I wanted to get the most out of our few hours we had in Rome so booked this private tour. It was great! I was so happy with what we did and where we went. The quick access to the Vatican was well worth the price alone! Our “Driver In Rome” Marco was so nice and very informative. We will definitely book another excursion!
Reviewer: Cher West

Everything we could have asked for and then some.
Our Private Vatican tour was fantastic. Our driver, Marco, took us to some really interesting places to see sights that others rarely see (we even saw Matthew Modine at one site). Anna, our tour guide at the Vatican, was incredible. Her knowledge and enthusiasm for the history we were exploring was awesome. She really provided a great experience and kept us drawn in throughout the tour.
Reviewer: Christy

Vatican & private tour
The rome excursion was truly awesome....Our private driver was very professional and assisted the six of with making the best decision on how to spend our fre time.The tour guide for the Vatican was extremely educational and pleasant. My only request would be to allow for a little more time to take pictures.I would highly recommend this excursion. It was truly worth the money.
Reviewer: hopkins

View All Customer Reviews
x
Small Shore Excursions generally range in size from 2-20 people, providing a more personalized experience than the large excursions offered by the cruise lines.
Standard Shore Excursions typically range from 20-50 people. These tours are similar in size to those of the cruise lines. While these day excursions are larger in size, our focus on quality remains extremely high.
Private Shore Excursions allow you to travel with your party alone. For groups of 4 or more, we can usually arrange a private shore excursion for less than the cost of a large cruise line tour.
Easy/Minimal Physical Activity: Only light walking and no major climbing required. You may need to negotiate a few steps.
Moderate Physical Activity: A fair amount of walking is required, and you may need to climb up full flights of steps and or negotiate uneven terrain.
Difficult/Significant Physical Activity: A large amount of walking and or climbing is required, often over unpaved and uneven terrain. You should be in good physical health if you reserve one of these tours.
Your booking confirmation will contain clear instructions on where and when to go to start each of your tours. It will also include instructions on what to do in the very unlikely event that you encounter difficulties in meeting up with your guide.
Name and Age of Each Guest

First and last name of each guest taking the tour, followed by each guest's corresponding age.

Please enter the lead guest's full name. The name entered should be the entire name listed in the lead guest's passport. Due to regulations at the Vatican Museum, the guest booking the tour must provide the information shown above, matching their valid passport at the time of booking. This guest must also present their passport to the Vatican officials upon arrival at the museum. This ONLY applies to the person making the booking, and not everyone in the group.

Please enter the lead guest's place of birth, including the city and country. The location entered should match the birthplace listed in the lead guest's passport. Due to regulations at the Vatican Museum, the guest booking the tour must provide the information shown above, matching the information in their valid passport at the time of booking. This guest must also present their passport to the Vatican officials upon arrival at the museum. This ONLY applies to the person making the booking, and not everyone in the group.
Lead Guest's Date of Birth

Please enter the lead guest's date of birth, including the date, month and year. The date entered should match the date of birth listed in the lead guest's passport. Due to regulations at the Vatican Museum, the guest booking the tour must provide the information shown above, matching the information in their valid passport at the time of booking. This guest must also present their passport to the Vatican officials upon arrival at the museum. This ONLY applies to the person making the booking, and not everyone in the group.