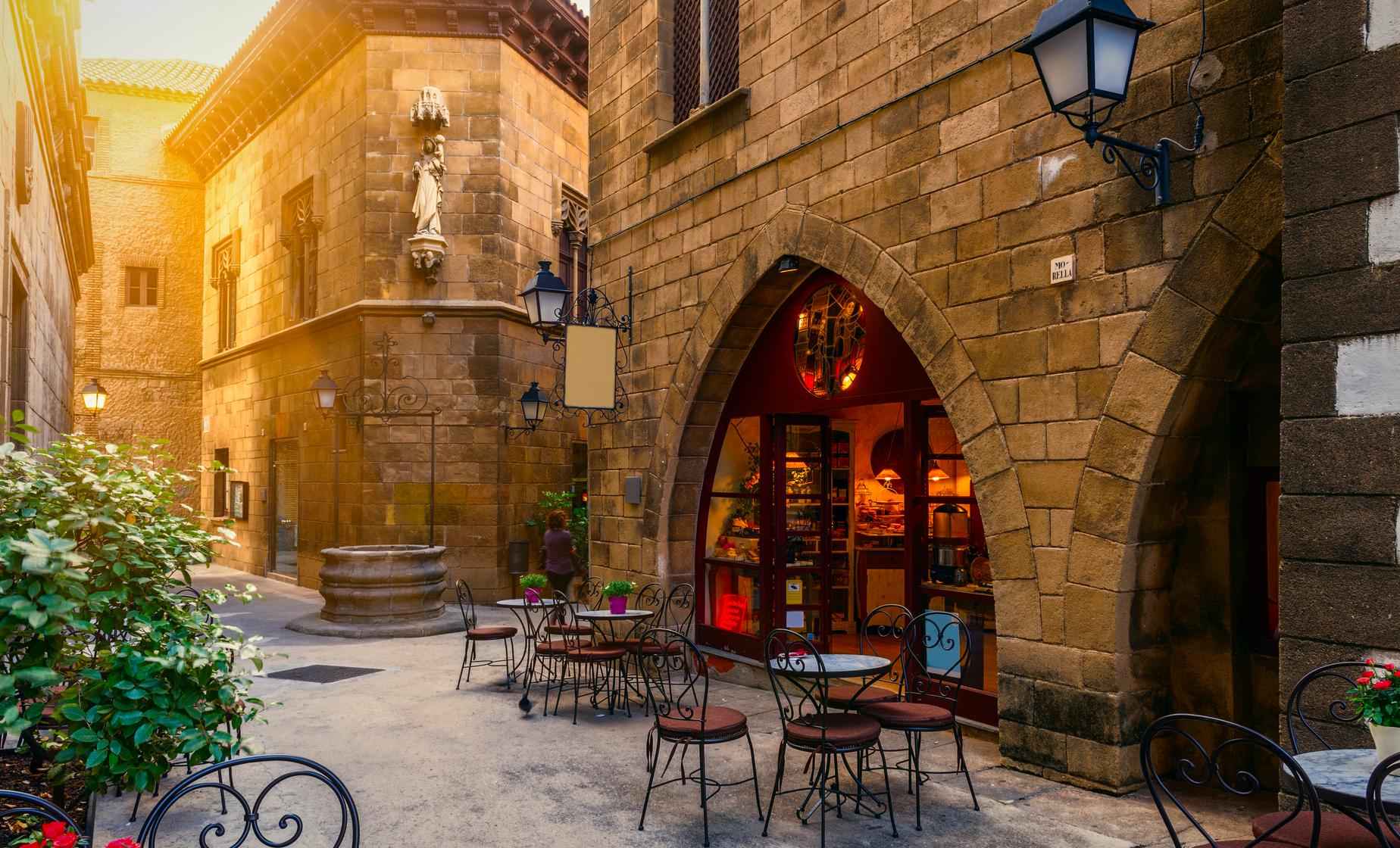 An approximately 10 to 15 minute taxi (not included, approximately 15 EUR each way) is required to reach your departure location.
Food/Beverage Provided Not Included
Recommended Dress As you will be visiting a religious or memorial site, shoulders and knees must be covered. Sensible, rubber-soled walking shoes, sunglasses and sunscreen are recommended.
Restrictions Guests must be able to walk on paved, as well as cobblestone surfaces. There are steps required to enter several of the sites as well as steep curbs in some areas.

Your day starts with a guided walking tour of the historic El Born neighborhood. Take in this popular chic neighborhood with its mix of modern and timeless gothic architecture, lined with boutique stores, colorful tapas bars and trendy cafes.

You will then board your air-conditioned coach as you embark on a panoramic tour of Barcelona. Your tour bus will take you up the coast of Barcelona for scenic views of the Mediterranean Sea, where you will be able to admire the intense changes the city underwent with the organization of the Olympic Games in 1992. You will drive by the Arc of the Triomf, Ciudadela Park, the Olympic Village, the Olympic Port, the beach and the fisherman's quarter, called Barceloneta, the Port Vell, and Plaza de Colon with its famous Columbus monument, indicating which way he sailed to discover the Americas. This is also the beginning of the famous Ramblas of Barcelona.

Your tour continues with a drive up to Mont Juic Mountain, where you will make a short stop at the Olympic Stadium. The expansive views of the city and sea from Mont Juic are breathtaking as you explore the area. Make your way up until you reach the Viewpoint of the Museu Nacional D'Art De Catalunya (MNAC), where you will take a short cable car ride for even more fabulous views.

Finally, you will leave Mont Juic and head to Passeig de Gracia, where you will see Antoni Gaudi's Casa Mila, which was named a UNESCO World Heritage building. Considered one of the most influential architects of his generation, Gaudi led the Modernist movement to design structures that combined architecture, nature, and religion and was able to create something completely unique.

Admire Venetian Towers and many more attractions on your way back into the city. On your last stop, you'll have an opportunity to see the iconic, La Pedrera. This was the last commissioned work of architecture from Antoni Gaudi. La Pedrera, also known as Casa Mila, was a departure from Gaudi's usual Neo-Gothic work in that it incorporated more features inspired by nature, hence the name "La Pedrera," which references the building's likeness to a stone quarry.

You can see the art, architecture, history, and beautiful views of Barcelona on this informative and fun guided tour of the city and still have the afternoon to explore on your own.

Please Note: Your tour departs from and returns to the Estacio del Nord area, which is near the Arc de Triomf. This tour may operate as a bilingual tour with English and Spanish narration.

From January 20 to about March 12 (dates may vary), the Montjuic cable car is under maintenance and will be substituted with the Port cable car. The tour concludes about 10 minutes walking distance from where it begins.

4.8 / 5  |  16 ReviewsReview This Tour
Barcelona Highlights Tour
We highly recommend this tour. It was everything and more! We started with a walking tour of the El Born neighborhood and Gothic Quarter. It was exactly what I wanted to visit in Barcelona and hadn't done the day before. Then we went to the Mountain which had incredible views of the city . We went on a cable car/funnicula ride which was an added treat. Passing the Olympic Stadium was a highlight as we could see into the stadium as we passed. This tour had a knowledgeable and personable guide. It definitely was worth it.
Reviewer: Lisa H

Delightful!
This was a great introduction to the beautiful city of Barcelona. We had 5 days to explore Barcelona after our cruise and this hit all the highlights so we could choose what we wanted to see in depth when we had more time to explore. It was exactly what we wanted at a reasonable price!
Reviewer: Audrey Kowalski

Enjoyed our tour
Very enjoyable tour! So many modes of transportation. A walking tour of the older parts of the city, a tour bus ride around the city, and an aerial tram ride up the side of cliff to view the city from above. Our guide was very informative and great at pointing out places to eat and also for restrooms breaks.
Reviewer: Eric

Barcelona Highlights and Spanish Village.
Great day out with tour guide Errol. Excellent English thoroughly enjoyable day. Great weather as always. Only downside was we did not go to Spanish Village dut to another bloody marathon. Tour companies should alter their itineraries around these events.
Reviewer: Gregory Lord

Great views
Enjoyed this trip, but was not given my ticket to the Spanish Village, so missed out on it, although I had paid for it.
Reviewer: Lyn Scantlebury

Barcelona Highlights
We enjoyed the walking tour of the Gothic quarter and Ramblas it was nice to walk through the streets with the guide explaining everything we saw. We drove through parts of Barcelona but would have liked to stop to take pictures of certain places like the beach. The time spent on the Mount Juric was beautiful as you got to see the whole panoramic view of this beautiful city.
Reviewer: Lori Scaccia