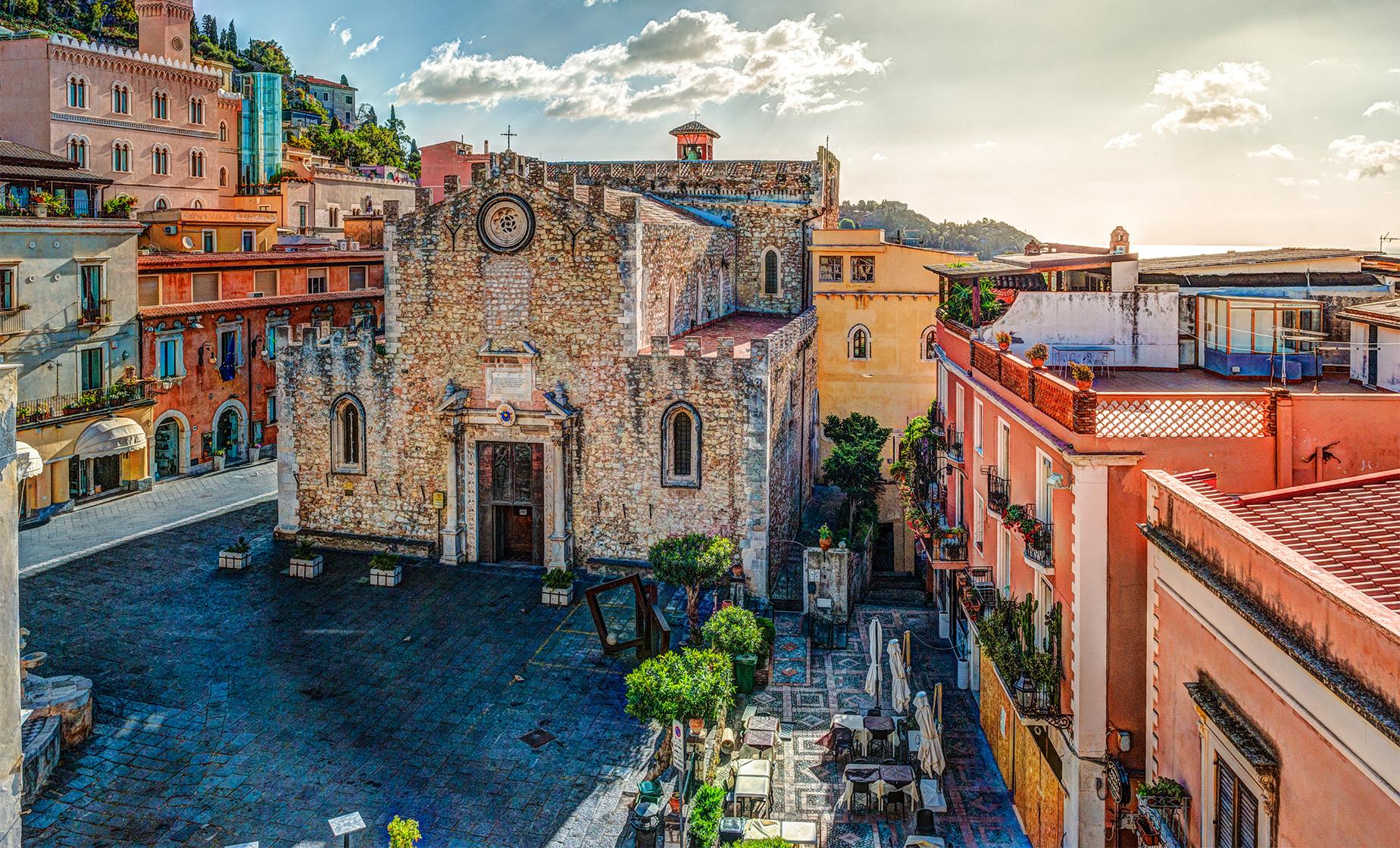 Cruise Ship Pier
Food/Beverage Provided Not Included
Recommended Dress We recommend wearing comfortable clothing and sturdy, closed toe shoes. Sunglasses and sunscreen are also suggested.
Restrictions Walking in Taormina is over paved and cobblestone surfaces, some of which are sloped. The Greek Theater requires climbing steep uneven stone stairs to enter and numerous steps inside. It is an optional visit.

After meeting your professionally trained guide, set out on the one hour drive to Taormina. Perched on the side of a hill overlooking the sea, this town has a delightful character. Upon arrival, your walking tour will begin with a brief exterior visit to the famous 15th-century Palazzo Corvaia. This building, indicative of the architectural style of the period, is adorned with classic double windows.

Your guide will take you to scenic lookouts of Mount Etna and the Bay of Naxos, point out the municipal buildings and the maze of staircase "streets" that intertwine in this predominantly pedestrian only hillside town.

You will then have approximately one hour of free time to grab a coffee or hot chocolate or explore the many shops that line Corso Umberto, Taormina's main street. As well as being a resort town with boutiques of European fashion, you will also see many shops that offer the local Sicilian pottery.

For guests up to the climb, during the free time, your guide will lead an optional tour of the impressive Greek Theater, known for its stunning location. This Roman-style theater was reconstructed in the 2nd century AD. It has marvelous acoustics which allow performances of classical plays to still be held in the theater. To reach the theater requires climbing several uneven, steep stone steps. To access the upper part of the theater also involves climbing uneven steps. For those willing to do it, you will be rewarded with impressive views. Guests wishing to visit the theater are responsible for their own admission which is approximately 10 EUR.

After free time, you will meet your guide at the designated location and walk back to your vehicle. From here, you will drive back to the city of Messina for a brief orientation. With a history dating back to the 8th century B.C. Messina has been sacked, seized, or conquered by Carthaginians, Memertines, Goths, Arabs, Normans and English to name a few, but their spirit was never defeated. In more recent times, the city was almost entirely destroyed by an earthquake and tsunami in 1908, which killed over 60,000 people and destroyed most of the ancient architecture. Further damage was added by the massive Allied air bombardments of 1943, which caused thousands of deaths.

Your driver will take you along Messina's main street, the Via Garibaldi. You will see the Vittorio Emanuele Theater, the Town Hall, the church of Catalani, the Court and the university. Before returning to the ship, a photo stop will be made at the Cathedral Square to view the church, the Orion Fountain and the world's largest Astronomical clock, with more than 33,000 gears and moving parts. Guests wishing to remain in the downtown area will be responsible for their own transportation back to the pier.

4.6 / 5  |  95 ReviewsReview This Tour
Take This One
Great tour...small group. Taormina is a must see...Messina is just a quick stop at the cathedral.
Reviewer: rick anderson

Taormina
Loved that there were only 3 people on our tour. Our guide was excellent and it was good value.
Reviewer: Edward Peters

Interesting Towns
Ignorant about these places, but went. With a knowledgeable and personable guide I learned a lot and had an enjoyable day!
Reviewer: Lance and Candy E Gidcumb

Exclusive Taormina and Messina
Our charming hostess for this tour was Manuela. It is obvious she is passionate and proud of the history of Taormina and we appreciated her local food recommendations. One couple was very late upon return which left our time in Messina very limited. Still many interesting features were pointed out to us from the bus, with suggestions of what to visit before our return to the ship
Reviewer: Jane Chiew

Great tour leader
Our tour leader made the trip efficient and interesting. Taormina was beautiful and we had enough time to sightsee, shop and get a snack. Messina was also worth seeing.
Reviewer: Kathleen