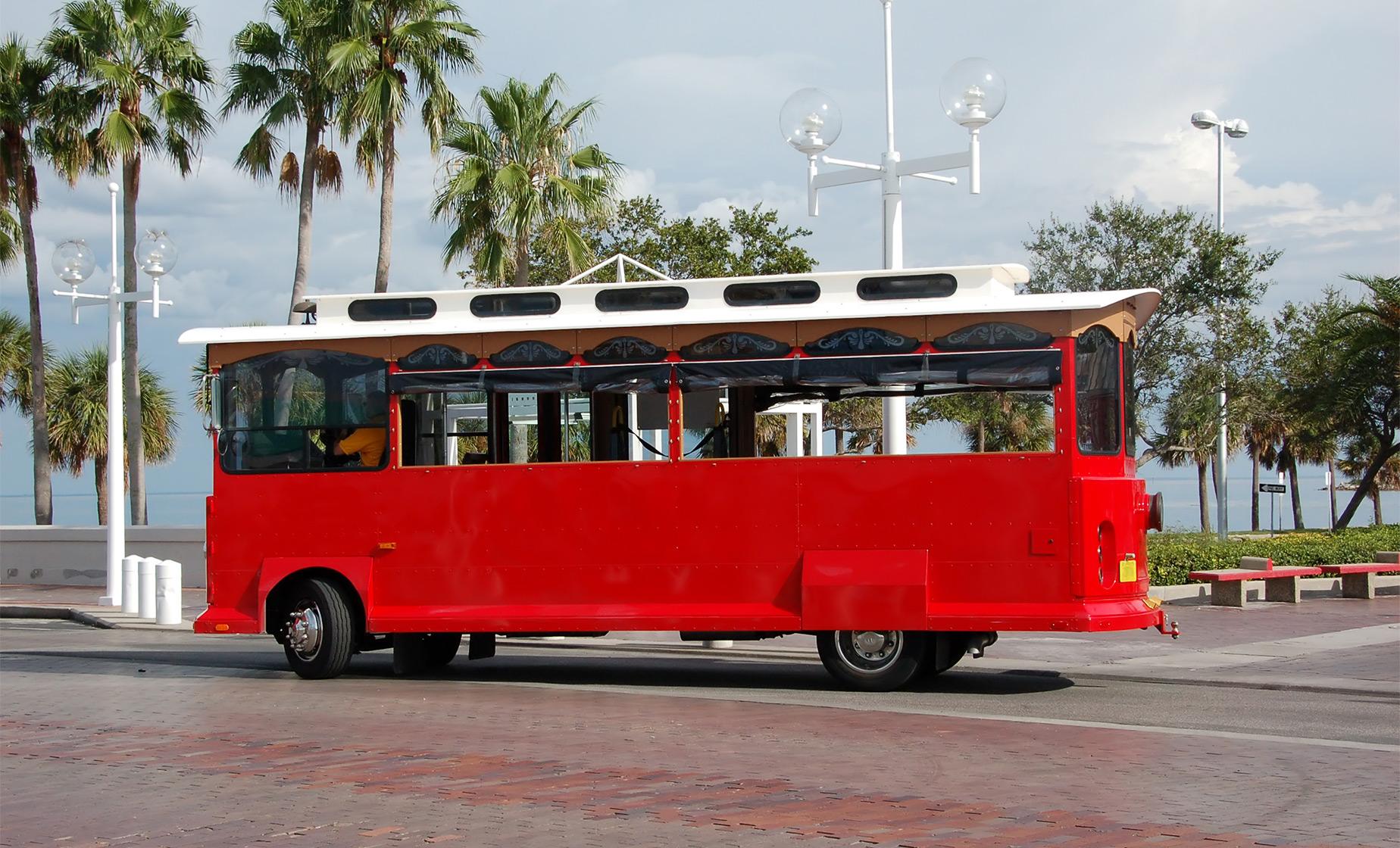 Numerous bus and trolley stops throughout Vancouver. An approximately 5-minute walk is required to reach the closest stop.
Food/Beverage Provided Not Included
Recommended Dress We recommend wearing comfortable clothing and sensible rubber-soled walking shoes. Sunglasses and sunscreen are also suggested.
Restrictions Guests must be able to walk over paved, gravel, and packed dirt surfaces, some of which are uneven or on an incline. This tour is not wheelchair accessible. Luggage and strollers cannot be accommodated. Baggage storage services are available for cruise guests at Canada Place for an additional fee (not included). For security reasons, short-term baggage storage is available to cruise passengers only. Pets are not permitted onboard the trolley, with the exception of official guide dogs or service animals. Aside from water and baby bottles, food and drink is not allowed.

This hop-on, hop-off tour is the easiest way to enjoy Vancouver's most popular areas: Stanley Park, Chinatown, Gastown, Granville Island and more! Explore Vancouver onboard clear-top buses and San Francisco-style trolleys. The tour features a live commentary on the trolleys and a number of languages on the open top buses, so you'll have the opportunity to learn what makes this spectacular city so special. Take advantage of two routes that will take you all across the city; both are included in your hop-on hop-off tour of Vancouver.

Make sure to take time to visit Stanley Park, opened in the late 19th century and boasting over 1,000 acres of west coast evergreen rainforest. Wander about cedar, hemlock, and fir trees before enjoying the stunning views from Prospect Point. Once at Prospect Point, take in the spectacular views of Lions Gate Bridge, the North Shore's magnificent mountains, and the bustle of Vancouver's harbor below. It can safely be stated that all of Stanley Park is one great big garden. The Rose Gardens, situated just steps from the Georgia Street entrance to the park, is a true inspiration and a "must see" for garden enthusiasts as well as Vancouver's most popular destination for wedding photos. The park is also home to the famous Totem Poles, a culturally rich and visually stunning sight! The totems found here are representative of the art and society of many of B.C.'s Native Nations.

Be sure to make a stop at the bustling Granville Island while on your Vancouver tour. This peninsula and shopping district includes a stunning marina, wonderful art galleries, cute boutiques, and is perhaps best known for its Public Market. The Granville Island Public Market features colorful booths that display unique homemade good and products, perfect for that souvenir to remind you about your Vancouver tour.

Discover the thrill of space adventure as you voyage to the outer edges of the universe at the Space Center, or admire a tranquil yet vibrant expression of Ming Dynasty culture at the Dr. Sun Yat-Sen Garden in the midst of Chinatown. If you wish, enjoy time in Gastown, Vancouver's oldest neighborhood, which has earned its place among the National Historic Sites of Canada for its history, grand Victorian buildings, and thriving urban lifestyle. Explore Vancouver at your own pace on this charming and convenient hop-on hop-off tour around the city.

Please Note: There are 2 routes with varying tour durations and seasonal schedules. The Park Route (Green Line) takes approximately 2 hours to complete without getting off. The City Route (Blue Line) takes approximately 90 minutes to complete without getting off. The routes run every 30 minutes from May to September, and hourly from October to April. The tours are narrated in English, French, Spanish, German, Japanese, Korean, and Mandarin (available on buses only). First and last tour times will be detailed in your electronic ticket.

Shore Excursion Leaves From
Numerous stops throughout Vancouver. (Full details will be provided in your electronic ticket upon confirmation.)

Restrictions
Guests must be able to walk over paved, gravel, and packed dirt surfaces, some of which are uneven or on an incline. This tour is not wheelchair accessible. Luggage and strollers cannot be accommodated. Baggage storage services are available for cruise guests at Canada Place for an additional fee (not included). For security reasons, short-term baggage storage is available to cruise passengers only. Pets are not permitted onboard the trolley, with the exception of official guide dogs or service animals. Aside from water and baby bottles, food and drink is not allowed.

VanCouver
We had so much fun on this! Great way to see the city and it's cultural diversities! Right in the middle of the city there was a community garden. We also saw a couple getting married on the steps of the large corporation downtime. It was on the Hop on Hop off tour that we had our best meal of the trip at a hip and happening restaurant called "LOCAL". yum-best fish tacos.
Reviewer: Bill & Gail Emery

Great Way to See Vancouver
When visiting large cities, we often use Hop-On Hop-Off to get an overview of the area and as a means of transportation to go back to areas where we want to spend more time. This was perfect for Vancouver, which is a compact city with many different areas including a large park. The passes were good for 48 hours, which was great for us since we spent two days in this beautiful city.
Reviewer: Glenn Braunstein

Excellent Hop on Hop off
This was a great excursion. A great way to see the city of Vancouver
Reviewer: mary Ann WHitaker

great way to see the city!
The HOP ON HOP OFF is a great way to explore a city to get familiar with the sites and to be able to get off at particular stops explore and get back on again. Really liked that we had a stop very close to our hotel and that the signage was great to see
Reviewer: Debra

Vancouver Hop On Hop Off Bus Service
We were pleased with the hop on hop off service; however, the description in the Excursion booklet said they handle transferring your bandage to the hotel, which they do not. The attendants working at the ship terminal bus stop were very helpful and courteous and so were the bus drivers.
Reviewer: Vince Robertson