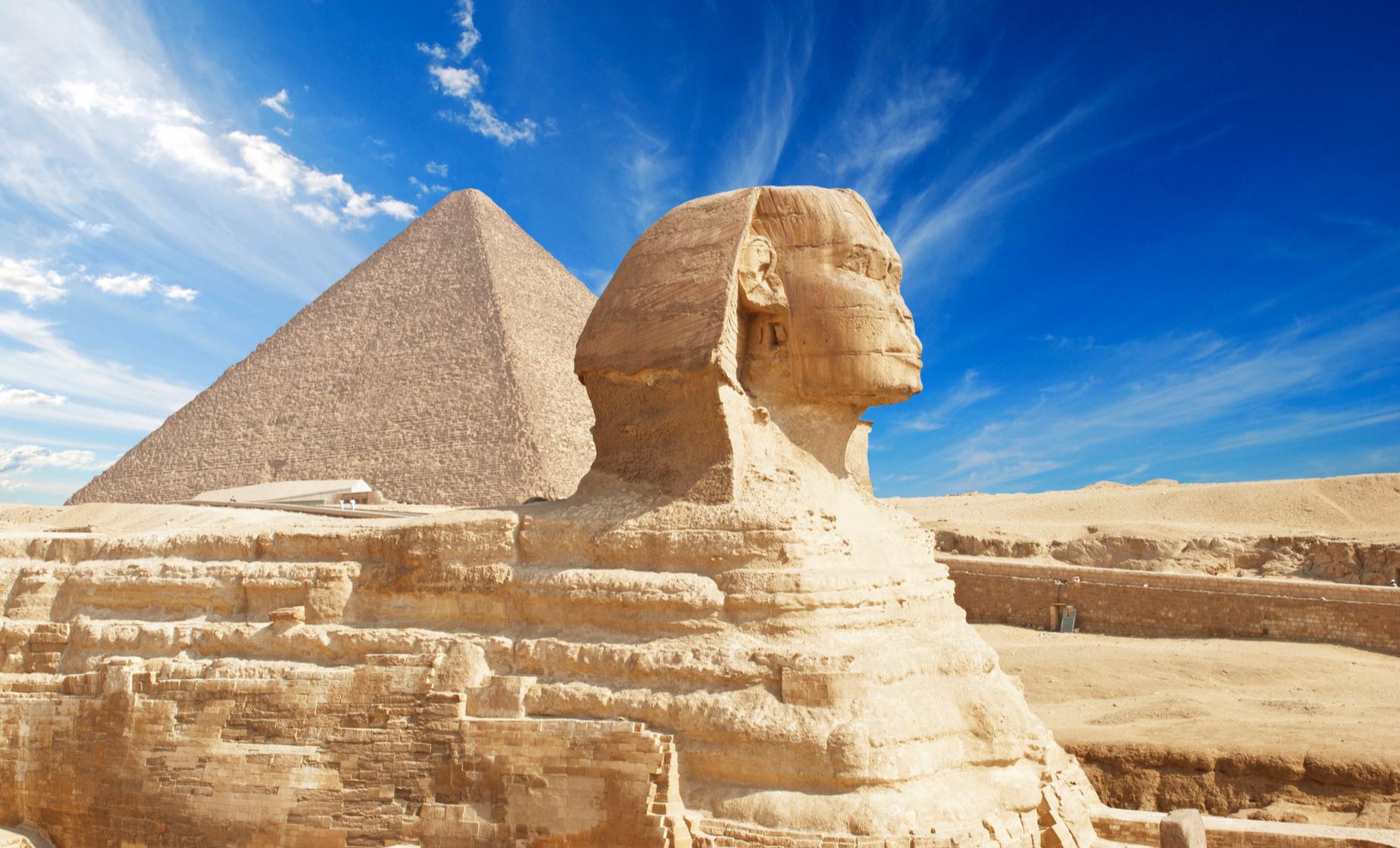 Ship Pier
Food/Beverage Provided Multiple meals
Recommended Dress When visiting the Mosque (day 2) shoulders must be covered and men and women must wear long pants covering all of the leg. Women must also bring a scarf to cover their head. Comfortable, sensible walking shoes and sun protection are recommended.
Restrictions Minimum age to participate is 6 years old. Guests must be able to walk approximately 1.5 miles each day over uneven, gravel, cobblestone and sandy surfaces with paved walkway. Stairs are required in the Egyptian Museum. Cameras are not allowed in the museum.

Are you staying overnight in Alexandria? This two-day tour of Cairo with a hotel, is an outstanding way to see all of the city's highlights. You will escape the crowded cruise line tours on a far more personable experience with your professionally licensed guide.

Your tour begins as you depart the pier for the approximate three-hour drive through the flat desert landscape to Africa's largest city: Cairo. After arriving at the outskirts of Cairo, you will proceed to the Giza Plateau, to discover the only remaining Wonder of the Ancient World, the Pyramids of Giza. It is here that three pharaohs erected grand tombs, to protect their mummified remains in the afterlife. You will then drive to the high western plateau, for panoramic views and photo opportunities of the valley and pyramids below.

The next stop on your shore excursion is a visit to the guardian of the mortuary complex, the mysterious Sphinx. This mystical creature has the head of a man and the body of a lion and stretches out to a length of 240 feet. It is believed the Sphinx was carved out of a solid natural rock around 2650 B.C. Following your visit, you will have lunch at a nearby hotel. After lunch, a stop will be at the Papyrus Institute to see demonstrations on how the ancient Egyptians made paper from reeds from the Nile. Spend some free time for souvenir shopping in the adjacent bazaar.

Your last stop is the magnificent Egyptian Museum, the most important depository of Egyptian antiquities in the world. The museum is home to over 120,000 items, only a portion of which are in display in its more than 120 rooms. The artifacts date from 2700 B.C. to the 6th-century A.D. It includes thousands of statues, jewels and the treasure of the boy king, Tutankhamun. Your tour includes a visit to the King Tut gallery, which houses the golden mask and items from the treasury. It does not include a visit to the Royal Mummy room.

Following your visit to the museum, drive to your hotel. The evening is then at your leisure to rest or explore. There are multiple dinner options, but the cost of dinner is not included in your tour price. Guests will have the option of attending the Light and Sound show on the Pyramids (at an additional cost to be paid that evening). Overnight in Cairo (hotels used are the Conrad, LeMeridian or similar based on availability at time of booking).

After an early breakfast, drive to the Citadel of Saladin, where panoramic views of the city of Cairo can be seen. Here you will also visit the spectacular Alabaster Mosque of Muhammad Ali, the founder of modern Egypt.

Your tour continues on to the area of Sakkara, located south of Cairo. Sakkara is one part of the great necropolis of Memphis, which was the capital of the Old Kingdom. It was thought that the section was for the kings of the 1st and 2nd Dynasty only, but excavations have revealed the tombs of a prime minister, the son of one of the Dynasty's kings and a queen's pyramid. Sakkara is probably best known as the location of King Djoser's Pyramid, better known as the Step Pyramid. It is the oldest known of the nearly 100 pyramids that have been discovered in Egypt. It was designed by the architect Imhotep, whose design was both unique and revolutionary.

From Sakkara, proceed to the old capital of Memphis. You will see the ruins of the Temple of Ptah and see the fallen colossal statue of King Ramses II and the Alabaster Sphinx of King Amenhopis II during your orientation drive. A stop will be made for lunch at a local hotel. After lunch, you will begin your drive back to Alexandria, arriving in the late afternoon.

Please note: A visit inside the Pyramids is not included on this tour. There is no air-conditioning or elevator inside the Egyptian Museum; guests must use the stairs to access the 2nd floor. Cameras are not permitted inside the Egyptian Museum. The drive between the pier and Cairo is approximately 3-hours in each direction. Hotel rooms can accommodate up to three guests. Parties of four would need two rooms.

Great Experience
If you are on a cruise and trying to decide .... this is your best option. Small group, personalized service, Awsome hotel, and guide knowledge. Dont let the cruise line scare you....they make sure you are in plenty of time prior to sailing
Reviewer: Cruiser

I really would buy this product again!
This was by far the highlight of our cruise .. from the guide to the experiences .. everything was over and above exciting and we saw so much in such a short period!
Reviewer: Meesie