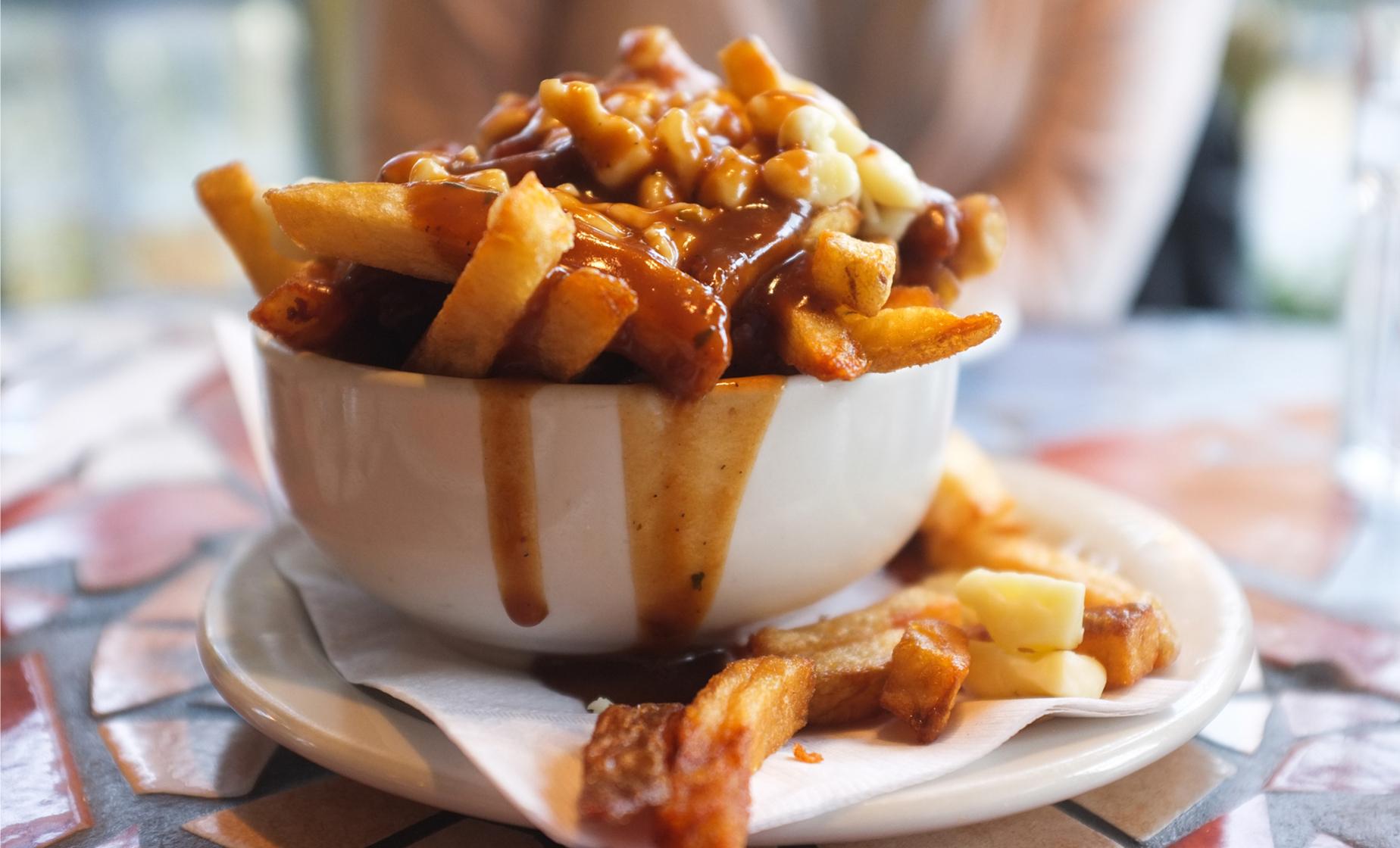 A 3 to 5 minute taxi (approximately $5 US, not included) is necessary to reach the departure location.
Food/Beverage Provided Samples of food and beverages from 7 culinary stops.
Recommended Dress We recommend wearing comfortable, weather appropriate clothing and sensible, flat-soled walking shoes as this tour operates regardless of weather. Sunglasses, hat, and sunscreen are suggested.
Restrictions Tour involves approximately 2.5 kilometers / 1.5 miles (roughly 1 hour) of walking over even, cobblestone and uneven surfaces.

Discover some of Canada's most traditional dishes like beavertails and poutine, chit chat with chefs at hotspots offering some of the best Canadian cuisine, and even more when you book this savory seasonal walking tour in Victoria. Your tour includes an exclusive local discount card, a bottle of maple syrup to take home as a souvenir, three hours of exploring seven local hotspots, and sampling local bites and beverages such as Canadian poutine, candied salmon, beavertails, and Caesar cocktails, as you traverse in and around Victoria's oldest neighborhood of James Bay and Fisherman's Wharf. Learn the stories behind some of Canada's most traditional dishes as you pass by iconic sites like the Parliament Buildings and the Pendray Inn. With the chance to enjoy a maple syrup tasting and whet your palate with British Columbia wine, this historic food walking tour is ideal for culinary connoisseurs and culture enthusiasts alike!

Begin your culinary adventure by making your way to your rendezvous point at the Finest At Sea Fish Market to devour delicious seafood like candied salmon, and get a look behind the scenes of its processing plant. Next, head to the Fisherman's Wharf, where you'll find a mix of float homes, fishing vessels, restaurants, and food kiosks alike just around the corner of the Inner Harbour where you can sink your teeth into the traditional Canadian dish of poutine. This iconic dish originated in Quebec in the late 1950s, and chefs typically make this traditional Canadian dish with brown gravy-topped cheese curds and french fries. Next, take in spectacular water views as you pair a savory crab cake sample with one of the country's most famous drinks known as a Caesar Cocktail when you stop at Blue Crab; an award-winning restaurant with waterfront views of the Inner Harbor.

Continue your savory walking tour as you take in the beauty of the Victorian-style homes, historic sites like the 19th century Parliament Buildings, and lively, historic waterfront neighborhood of James Bay. As Victoria's oldest neighborhood, James Bay gives you a chance to see and pass by iconic sites during your culinary excursion, including the breathtaking Inner Harbor, the 20th century Empress Hotel, and the Victorian-era Pendray Inn. Along the way, you'll stop by the popular Nanaimo Bar to chat with chefs and sink your teeth into sweet treats that are mostly found in Western Canada and devour delicious farm-to-table dishes at one of Canada's best restaurants: The Courtney Room.

Next, roam along Government Street to sink your teeth into the fried dough pastries of beavertails at the namesake restaurant before whetting your palate with a maple syrup tasting. Wrap up your culinary walking tour by heading to the Artisan Wine Shop off Broughton Street to indulge in a British Columbia wine tasting. Visitors and locals alike consume at least 95 percent of British Columbia wine in British Columbia, a region that now makes most of Canada's wines. Share in this mouthwatering wine that locals love, and enjoy a bottle of maple syrup to take back as a souvenir for the perfect end to your tour.

From indulging in traditional Canadian dishes made with local ingredients, to discovering the history behind each dish, this culinary adventure is a history buff's and foodie's dream. Sign up for this savory seasonal culinary walking tour for an unforgettable time in Victoria.