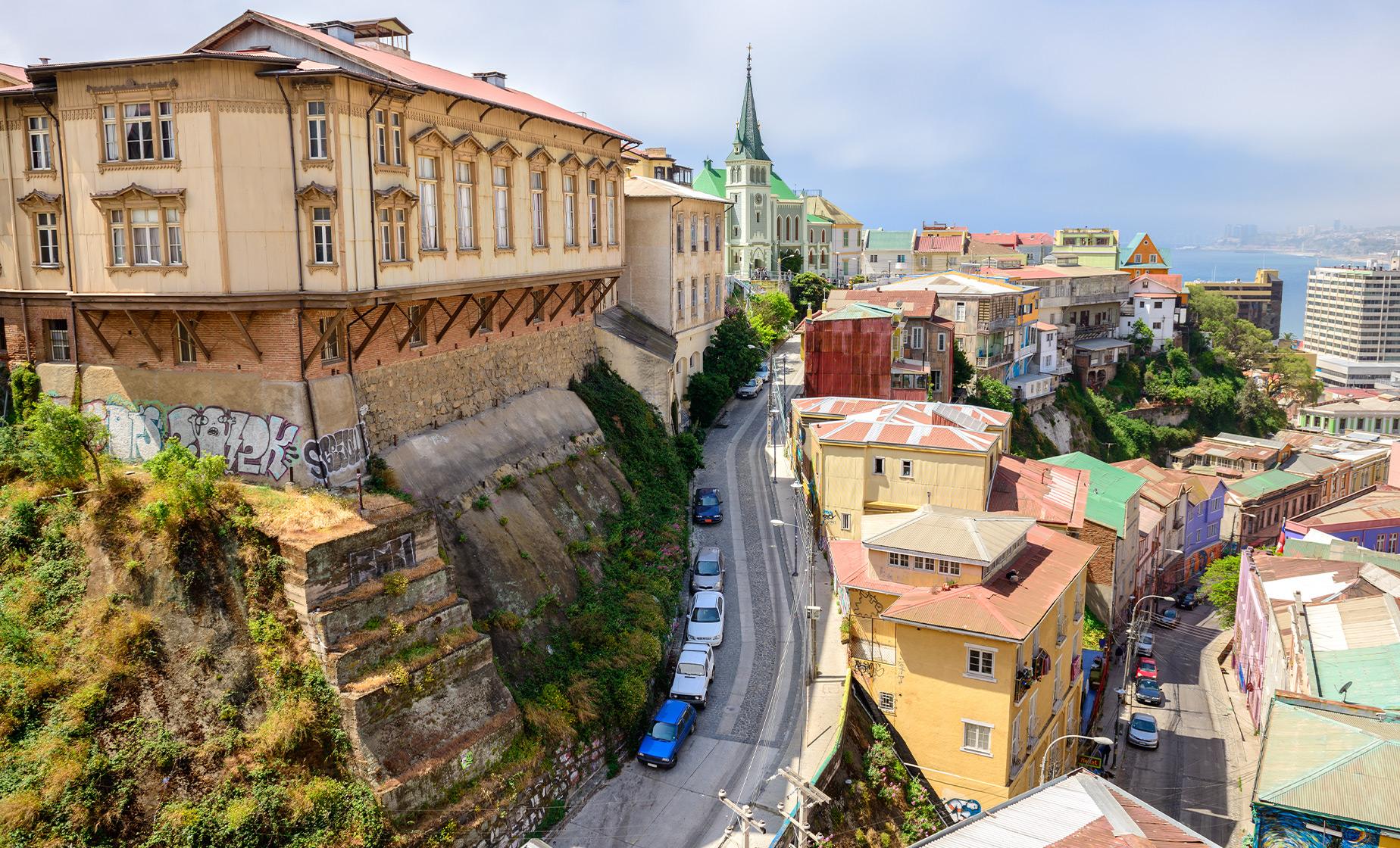 4.8 / 5  |  39 ReviewsReview This Tour
Price: $189.00
Please indicate below if you would like to be dropped off at a hotel in Santiago or the Santiago airport.
Choose Options My Cruise Itinerary
Summary
Shore Excursion Size

Cruise Ship Pier
Food/Beverage Provided Lunch and wine tasting is included.
Recommended Dress We recommend wearing comfortable clothing and walking shoes. Sunglasses, sunscreen, and a sweater or light jacket are also suggested.
Restrictions This tour requires a minimum of two guests to operate. Guests flying out of Santiago on the day of the tour must be booked on flights departing after 7:00 PM. Guests must be able to walk over paved as well as packed dirt surfaces, many of which are uneven and/or at an incline. There are steps at some of the sites and flights of stairs during the walking tour.

Don't rush to Santiago or the airport without seeing the charm of Valparaiso and sampling some of Chile's world-famous wines. After collecting your luggage and clearing customs and immigration, you will meet your transportation outside, and after loading your luggage onboard, will depart on your tour

Discovered in 1536, Valparaiso is one of the oldest and more charming seaports in South America. It was declared a heritage of mankind by UNESCO in 2003. On this drive around town, you will pass the National Congress and many historical buildings in the surroundings of this natural bay. During your tour, you will have an included ride on one of the fifteen elevators (cable cars) which are a must among the tourist attractions of this city. You will also be able to feel this city during the walking portion of your tour through its narrow streets and up stairways in one of the most traditional areas on top of the hills.

On the way to Santiago, the tour will stop at a winery located in the valley of Casablanca, Veramonte, or Emiliana. The viticulture history of the Casablanca Valley began in 1982 and has become one of the favorite places for the development of new projects in the Chilian wine industry.

Emiliana is the first organic and biodynamic winery in Chile. The Emiliana winery firmly believes that using sustainable, organic, and biodynamic agricultural practices result in better-balanced, healthier, and more productive vineyards, which in turn results in better quality grapes and therefore better wines. The winery visited will be confirmed on the day of the tour based on availability at the winery due to production that day. Regardless of which winery is visited, you will be treated to a guided tasting of some of their top wines.

4.8 / 5  |  39 ReviewsReview This Tour
Amazing tour
We took this tour the last day of our cruise. We decided to take this 8 hour tour as our flight home was only at 10pm. We were just 6 people plus the driver and our guide Alvin. Alvin was great introducing us to the Amazing street art in Valparaíso on a walking tour of the upper city. We had a lovely lunch at Viña Del Mar and on the way to Santiago a visit to a organic winery for some tasting of good wine. After all they we were dropped off at the air port. I highly recommend this tour and this guide.
Reviewer: Kathryn Perret-Gentil

Easy Come Easy Go
Pick you up at the port and drop you off at the airport with scenic stop and a winery in between. No complain here.
Reviewer: Peter S Cheung

Great tour, great guide
Our guide, Andreas, was very knowledgeable, friendly, and humorous. We really got to experience Valparaiso by walking around, taking funiculars, etc. It was a relaxing and enlightening day, and sure beat hanging out at the airport all day!
Reviewer: Scott

Post-cruise tour of Vina del Mar
Due to an unfortunate strike by the Chilean dockworkers, our tour was delayed by about 3 hours; however, Alvin was very flexible and we were able to have a shortened tour of Valparaiso before heading over to Vina del Mar and a wonderful lunch. Then a bit more sightseeing before heading to Emiliana Vineyards for winetasting, and then on to the airport. I would not hesitate to recommend this tour...just be prepared for any unexpected delays at the dock which are completely beyond the control of Shore Excursions Group.
Reviewer: Marcia Meyer

Very enjoyable
Loved the walking tour of Valpariso...we learned a lot about the city, it's people, etc. We also enjoyed the rest of the tour which included lunch in Vina del Mar and, on our way to the Santiago airport, a visit to an organic vineyard, with wine tasting. Our tour guides were fun, interesting and helpful.
Reviewer: Pam