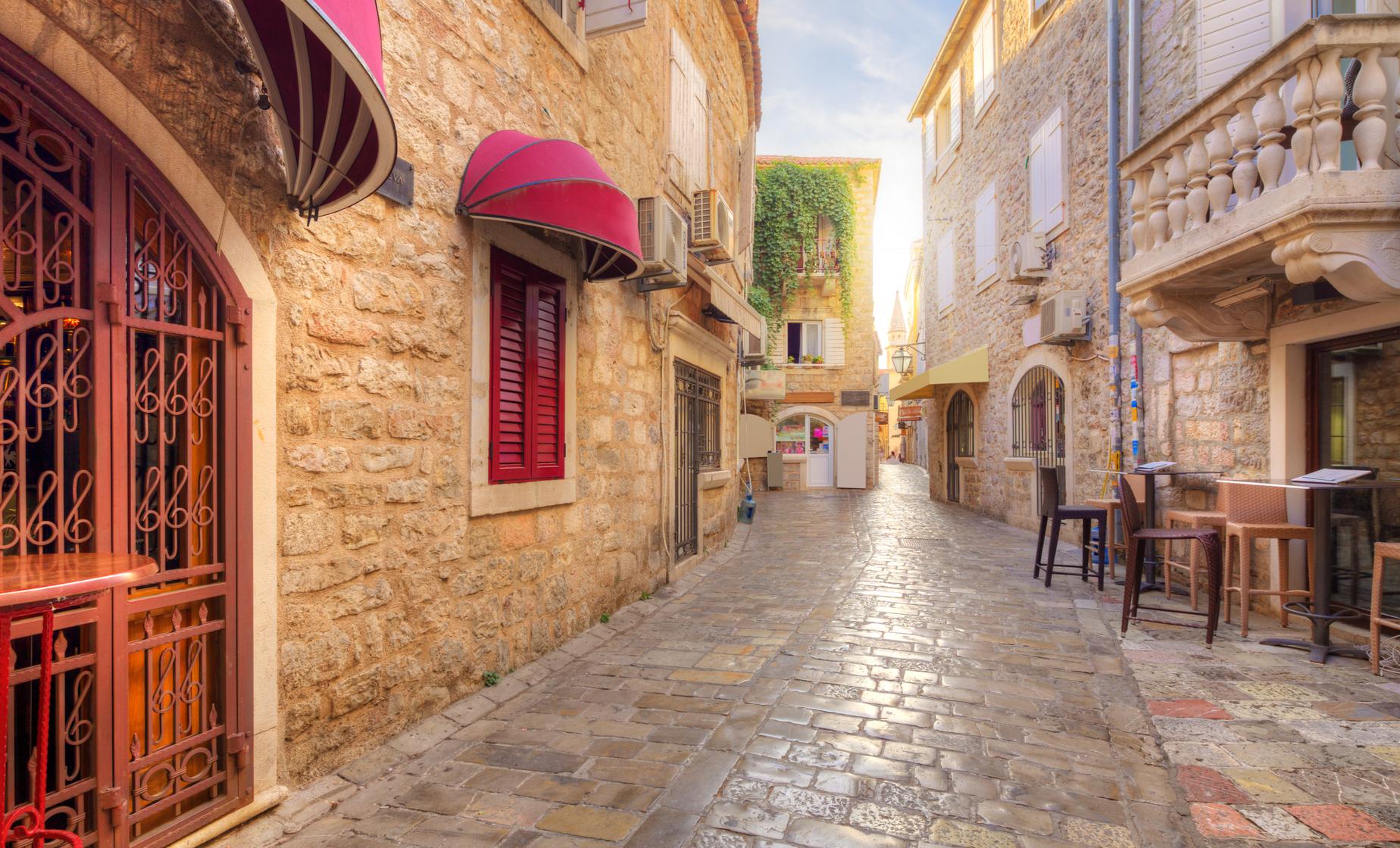 Cruise Ship Pier
Food/Beverage Provided Not Included
Recommended Dress If you plan to enter a religious or memorial site during your free time, your shoulders and knees must be covered. Sensible, closed-toe walking shoes are recommended. Sunscreen and sunglasses are also suggested.
Restrictions Guests must be able to walk approximately 1 mile total over uneven surfaces with various inclines and numerous steps. Wheelchairs cannot be accommodated on this tour.

Departing from the port of Kotor, you will enjoy a drive through the impressive landscapes of the valley of Grbalj. Upon reaching the Adriatic coast you will drive to the town of Budva. You will drive through the seaside areas of Becici and Rafailovici, best known for their resorts and small boat marinas. You will also be able to view Sveti Stefan, once a 15th-century fortified town on an island, that was acquired by the Yugoslav government and turned into a hotel during the Tito regime. Today it is an exclusive luxury resort. After the photo stop above this island, you will visit the oldest settlement on our coast, 2,500 year old Budva.

Departing your transportation, you will take a short walk to the old town of Budva, which was first mentioned in the old Greek legend of the grandson of Zeus Cadmus and his wife Harmonia. After entering the city walls, you will walk through the narrow streets and small squares of a fortified medieval town, mostly influenced by the ancient republic of Venice.

The layers of the numerous civilizations that have occupied this area show an interesting view of the history of Budva: Romans, Byzantines, Slaves, etc. The most important buildings and constructions in the Old Town are the churches of St. John, Holy Trinity, Holy Mary in Punta, St. Sava, the citadel fortress, and the town walls. On the way back, you'll have an opportunity to peruse some local leather goods as we make a 30-minute stop in a shopping center. Feel free to re-hydrate with some refreshments.

Returning back to the inland bay where you started, you will depart your transportation and take a stroll through the UNESCO World Heritage site of Kotor. The town was first mentioned in 168 BC, and was settled during Ancient Roman times when it was known as Acruvium. It has been fortified since the early Middle Ages. The city became part of the Venetian Republic in 1420 and except for two periods of Ottoman rule, it remained under Venice until 1797. It is these four centuries of Venetian domination that have given the city the typical Venetian architecture.

4.7 / 5  |  70 ReviewsReview This Tour
Good overall introduction
Pretty good informational tour for such a short time in port. We wasted a lot of time at the beginning waiting for others to join our group. I'm of the opinion that if you can't be on time, you should expect to get left behind. Otherwise, you inconvenience all those who were on time and paid good money for the full experience. We got shortchanged by those folks.
Reviewer: Shanna Boals

Review of Budva and Kotor
Thoroughly enjoyed the tour and the tour guide was informative and knowledgeable about the two cities that we visited. Additionally her English was excellent so there was no issue about what she was saying.
Reviewer: Lionel Rainman

Great guide and enjoyable tour
A nice walking tour of Budva and quick tour of Busy Kotor. Our guide was knowledgable and answered many questions from our group.
Reviewer: Glenn Sinclair

Budva worth visiting
Tour went smoothly - met by guide no issues -she was very good, informative, easy to work with, did a very good job overall. Going to Budva was worth it, saw more of the coast line, better understanding of the country and economy .
Reviewer: Paul

Budva and Kotor excursion
Over all we were very satisfied with our tour excursion to Budva and Kotor. The guide spoke fluent English and was very knowledgeable and informative. She met us in the designated spot at the designated time. Unfortunately 2 people didn’t show up and we were left waiting over 20 minutes which took from our tour time.
Reviewer: John Bouchard

Budva and Kotor tour
We had a great guide who was very knowledgeable about the areas that we visited. In addition, she was very patient with the group and interacted well. The tour was very typical and had a little bit of extra walking to get to some of the sites
Reviewer: Wayne Moore