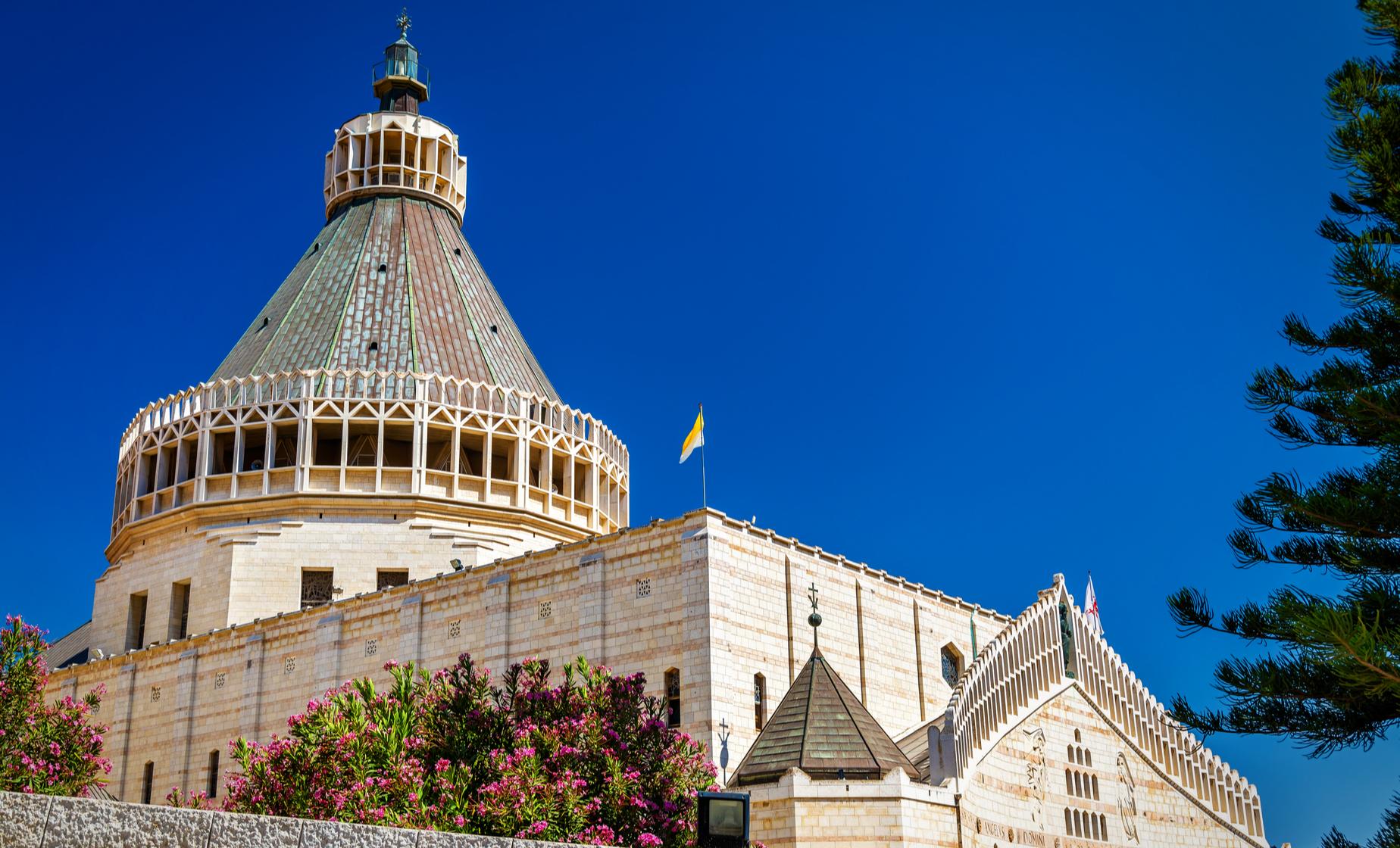 5.0 / 5  |  4 ReviewsReview This Tour
From $72.00/person to $1,040.00/person (Select "Individuals" below) Price varies based on number of individuals in your group
Vehicles available for this tour accommodate groups of up to 45 guests maximum. Groups with more than 22 guests may be accommodated upon request. Please take this information into consideration when booking.
Choose Options My Cruise Itinerary
Summary
Shore Excursion Size

Cruise Ship Pier
Food/Beverage Provided Not Included
Recommended Dress As you will be visiting religious or memorial sites, shoulders and knees must be covered. Comfortable, sensible walking shoes, sun glasses and sun screen are recommended.
Restrictions Walking is predominately over cobblestone surfaces with steps and inclines.

Follow the life of Jesus of Nazareth on this full-day private excursion to Nazareth and the Sea of Galilee.

Departing from the pier in Haifa, you will travel over the Carmel coastal range to Nazareth, the childhood home of Jesus, which is approximately 45 minutes away. A photo stop will be made from atop Mount Carmel, the historic scene of the struggle of Elijah with the prophets of Baal.

Upon arrival in Nazareth, you will visit the Basilica of the Annunciation. The current church was constructed in 1969 over the site of two earlier churches. Inside, the lower level contains the Grotto of the Annunciation, believed by many Christians to be the remains of the original childhood home of Mary. A large structure was commissioned by Emperor Constantine I, who had directed his mother, Saint Helena, to found churches commemorating important events in Jesus Christ's life. The Church of the Annunciation was founded around the same time as the Church of the Nativity (the birthplace) and the Church of the Holy Sepulchre (the tomb). Nearby is the Franciscan Church of St. Joseph, which is believed to be built on the location of Joseph's workshop.

You will then walk in the center of downtown Nazareth, past the bazaar, and see the site of Mary's well. Today, it is a modern water trough which was built over the ancient trough where women and animals went for water. The well is fed by a natural spring to the north. According to tradition, this was the place where the angel Gabriel appeared to Mary and informed her she would give birth to the son of God. You will then drive through the nearby town of Cana (Kafr Kanna), which is believed to be where Jesus performed his first public miracle, the turning of a large quantity of water into wine at a wedding feast. Time will be provided for lunch on your own (not included).

After lunch you will tour the Galilee region. Traditionally divided into Upper, Lower and Western Galilee, most of Galilee consists of rocky terrain, reaching heights between 1,600 and 2,300 feet above sea level. There are several tall mountains, including Mount Tabor, thought to be the site of the Transfiguration of Jesus, and Mount Meron, the highest point in Israel at over 3,900 feet. The region has relatively mild temperatures and heavy rainfall. As a result, it has very green areas containing flora and wildlife. You will drive to Tabgha, the traditional site of the miracle of the multiplication of the loaves and fishes. Further along the Sea of Galilee are the ruins of Capernaum. This was the home of the Apostles Peter, Andrew, James, and John, as well as the tax collector Matthew. According to the New Testament, Jesus taught in the synagogue in Capernaum on the Sabbath days.

Yardenit can be found where the Jordan River flows out of the Sea of Galilee, and is where some believe the baptism of Jesus by John the Baptist took place. After your visit, you will pass Mount Tabor on the journey back to Haifa.

Please Note: Vehicles available for this tour accommodate groups of up to 45 guests maximum. Groups with more than 22 guests may be accommodated upon request. Please take this information into consideration when booking. Due to traffic or crowds at the sites, the tour itinerary may be altered in an attempt to avoid delays. All sites mentioned in the tour description will be visited. Crowds are to be expected.

5.0 / 5  |  4 ReviewsReview This Tour
Nazareth and Galilee
Our tour guide was very knowledge, courteous and friendly. Very clean vehicle and great driver. It was a pleasure to have him as our Tour Guide
Reviewer: Ana Ramos

Satisfied with tour
We would like to inform you that we were very satisfied with the tour we had with Avi in Nazareth and Galilee. He is very knowledgeable and very pleasant with us. We appreciate also that he was patient with us considering that we had our 91 year-old mother with us. We noticed also that other people in the area were very friendly with him. Excellent!
Reviewer: Margarita C. Guinto

Amazing Experience
We were fortunate enough to have the same guide for our 2 days of private tours in Israel. Because of our experience on these tours in the port of Haifa, our 2 days in Israel were the highlights of our 21 night cruise...Dubai to Barcelona. This was our first experience with Shore Excursions and it will not be our last!
Reviewer: Dave and Patti Fields

The Sea of Galilee
The three day tour of the Holy Land was fantastic, a trip of a lifetime! Avi, Shahar, our tour guide was amazing, we missed him and his expertise when we left Israel, especially when we were in Athens, the Amalfi Coast, and Naples. Avi knew exactly where to take us, and he did a splendid job of re-living, unfolding biblical history before our eyes, what an experience that was! We highly recommend Avi to our friends and people we know. May God bless you many time more Avi!
Reviewer: Faye Lapaz