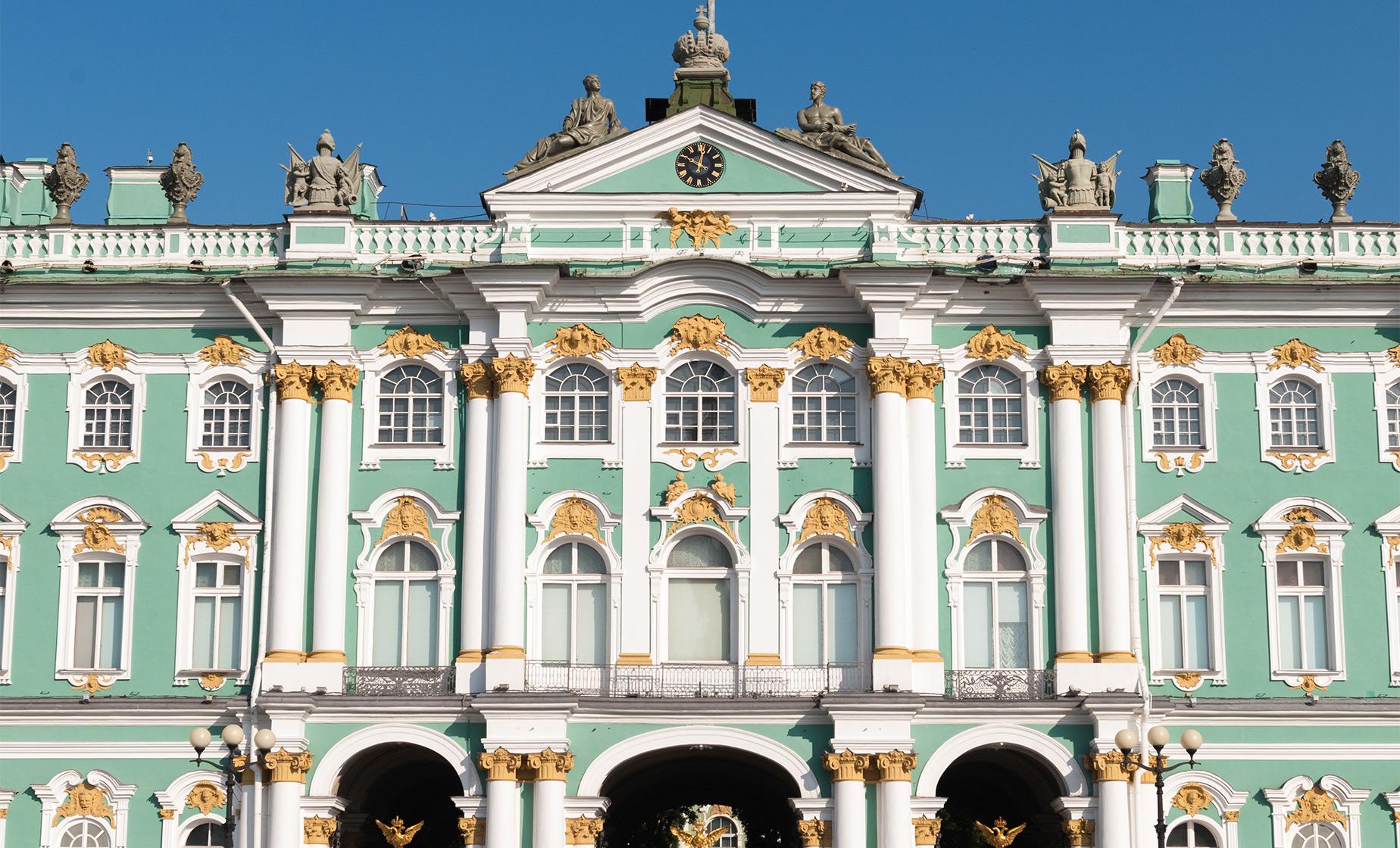 Cruise Ship Pier
Food/Beverage Provided Lunch is included.
Recommended Dress We recommend wearing comfortable clothing and sensible walking shoes are recommended. Sun glasses and sun screen are suggested.
Restrictions Guests must be able to walk a total of approximately 2 miles each day. Long flights of stairs are required to reach the public rooms in most palaces and the Hermitage. Due to the quick pace, this tour is not suitable for any mobility restricted traveler including slow walkers, or guests who need to sit and rest periodically. The minimum age to participate is 4 years old. Due to the long day of touring each day, it is not suggested for children under 12. Due to administration and immigration restrictions, there will be no refund for programs canceled within 15 days of departure.

Escape the mobbed cruise line tours and enjoy this incredible St. Petersburg 2 Day Shore Excursion complete with inside visits to Catherine's Palace, the Hermitage, Peter and Paul Fortress and Spilled Blood with a walking tour in the Gardens of Peterhof, the best way to experience St. Petersburg.

Catherine's Palace The grand, Baroque style palace was built for the wife of Peter The Great in the village of Pushkin. It exceeds all the other palaces with its gigantic size, the stunning facade which extends for almost 1000 feet, and its unique decorations. You will have a tour of all the rooms open to the public, including the stunning lost Amber Room, and the Great Hall. You will also view a few selected parts of the more than 1,500 acres of park and gardens that surround the palace. Designed by Rastrelli, the ornate Baroque Palace features an ornate blue facade and gold onion domes crown the palace's north end, the site of the chapel. Your tour visits the White Vestibule, Grand Hall, the Amber Room, the Portrait Hall, the Crimson Pilaster Room and more. Please be advised that during the high tourist season Catherine's Palace welcomes tours every day except Tuesdays; this may also apply to certain 'events' also taking place in St. Petersburg. In these instances, the Palace of Paul may be visited alternately.

Peter and Paul Fortress Built in 1703 by Peter the Great to protect his new capital, the fortress never saw battle and became a prison for politically harmful people. You will visit the Peter and Paul Cathedral, the traditional, ornate church that houses 18th century paintings, icons and the tombs of many of the Romanov Dynasty Tsars and Tsarinas, including Peter the Great, Catherine the Great, and the last Tsar, Nikolai II and his family members. Originally built to protect the city from Swedish attack, the fortress soon became Russia's Tower of London, a place for political prisoners, including Peter the Great's own son.

Hermitage The former residential Winter Palace of the Romanov rulers, today houses one of the world's most prestigious museums, where the rooms rival the art within them. Your guided tour includes both the Winter Palace and the Hermitage display rooms, which house some of the museum's more than three million art works, including works by DaVinci, Rafael and Rembrandt, to name a few. If nothing else, this is the must-see place in St. Petersburg. Your 1.5 - 2 hour guided tour visits the display of rooms, plus the Baroque Winter Palace that boasts patterned parquet floors, ornate staircases as well as molded and decorated ceilings.

Peterhof Park Travel to another former summer Imperial residence. Set within magnificent gardens, Peterhof is reminiscent of Versailles. It was almost destroyed by the Nazis in World War II but has been restored to its full splendor. The gardens are dotted with countless fountains, charming pavilions and summer houses. The fountains of Peterhof Palace are amongone of the most famous tourist attractions. The diversity of fountains in the park is surprising, from monumental ensembles like the Samson Cascade to the ever-popular Joke Fountains, including one which sprays anyone who steps on a particular paving stone. Please note, this tour does not include an interior visit of the Peterhof Palace.

Please Note: The Hermitage Museum is closed on Mondays; as a result, the itinerary's order is subject to change. All of our tours in St. Petersburg are operated by authorized guides, and you therefore do not need to secure an independent visa in order to participate in this tour. In order to book this tour, you must provide us with full names, dates of birth, nationality, and passport numbers for each tour participant so that our guides can secure the proper tour visas on your behalf. Note also that, if you wish to explore St. Petersburg on your own while not accompanied by one of our guides, you will need to secure an independent visa.

Please be aware that cruise lines occasionally mislead passengers by telling them that they are not allowed to disembark the ship in St. Petersburg unless they are on an excursion purchased through the cruise line. In addition, the cruise lines also sometimes tell passengers that they cannot disembark the ship until the passengers on the cruise lines' excursions have done so first. This is incorrect, and you are free to exit the ship as soon as passengers start to disembark because Russian law states that a cruise ship cannot hold passengers onboard against their will as long as they have the proper documents. However,in order to clear immigration, you will need to bring along: 1) Your passport; 2) A photocopy of the picture page of your passport; and 3) A copy of your tour tickets. 4) An immigration form passed out to all guests on the ship. We will provide you with your tour tickets as part of the documents we e-mail to you after you make a tour booking.