Price: $65.00
New Orleans is the city that gave birth to the coolest genre in music, jazz. Learn the origins and culture of jazz before making your way to the 19th century neighborhood that boasts the best music and bars in town. ThereÃ¯Â¿Â½s nothing quite like a night out in Ã¯Â¿Â½The Big Easy.Ã¯Â¿Â½
Full Details
Excursion Size: Small
Excursion Type: Cultural, Active, Scenic, Walking
Food/Beverage: None
Activity Level: Easy
Excursion Duration: 2 Hours 30 Minutes

Price: $48.00
Likely To Sell Out
Bring a team of up to five people for a fun and informative New Orleans scavenger hunt. Solve clues, complete challenges, and learn local history while enjoying the sights and jazzy sounds of this amazing city.

Price: $63.00
Likely To Sell Out
Observe South Louisiana's wildlife from the comfort of a custom swamp boat as you pass through one of the state's most famous parks.

Price: $24.00
Likely To Sell Out
Experience the French Quarter, the oldest neighborhood in New Orleans, for a true taste of the city's culinary and literary culture.

Price: $24.00
Explore America's most spooky city on as you encounter the dark side of the French Quarter. Uncover the unknown on a unique New Orleans tour full of supernatural landmarks.

Price: $105.00
Travel back in time to the 19th century on this tour that takes you to some of New Orleans's most famous plantations.

Price: $60.00
Take an air-conditioned bus tour through the many historic sites of the Crescent City, starting with the world-famous French Quarter.

Price: $58.00
Explore the historical city of New Orleans to see all of New Orleans's marvels by bus. Get acquainted with the rich Creole culture of this vibrant Southern city.

Price: $32.00
If you're interested in New Orleans's haunted history, this ghost tour of the French Quarter is the perfect way to spend an entertaining evening.

Price: $30.00
If you're looking for an exciting evening tour in New Orleans, let your guide take you to the hottest drinking locations while you learn about notorious New Orleans scandals.

Price: $45.00
Experience the sights and culture of New Orleans from the water. Witness the hustle and bustle of America's second largest port, relax on the water, and enjoy the Louisiana scenery aboard an authentic steamboat.

Price: $60.00
Experience the sights and culture of New Orleans from the water. Witness the hustle and bustle of America's second largest port, relax on the water, and enjoy the Louisiana scenery, with lunch, aboard an authentic steamboat.

Price: $24.00
Uncover New Orleans' spookier history on this educational tour of St. Louis Cemetery. Get an inside look at Voodoo with author Robert Florence.

Price: Starting at $150.00/person
Have your very own private guide to lead you on a delicious journey as you taste your way through the varied New Orleans food scene and discover how culture and history blend together, making this city one of the USA's top foodie destinations.
Full Details
Excursion Size: Private
Excursion Type: Cultural, Active, Scenic, Cuisine, Walking
Food/Beverage: Food Sampling
Activity Level: Easy
Excursion Duration: 2 Hours 30 Minutes

New Orleans, Louisiana, is one of the most vibrant and distinctive cities in the United States. There's so much to do in the "Big Easy", from historical tours of the city's storied past to cultural experiences filled with delicious local cuisine and smooth jazz. Named for Philippe II, the Duke of Orleans, New Orleans has a rich French influence. Over time, the city's increasingly diverse demographics and burgeoning commercial sector have led to continued prominence into the 21st century.

Today, the city is regarded as one of the South's crown jewels: a unique, laid-back place that knows how to party. See the sights, enjoy the food, and listen to the characteristically New Orleans music that has made the city one of the most sought-after tourist destinations in the South. 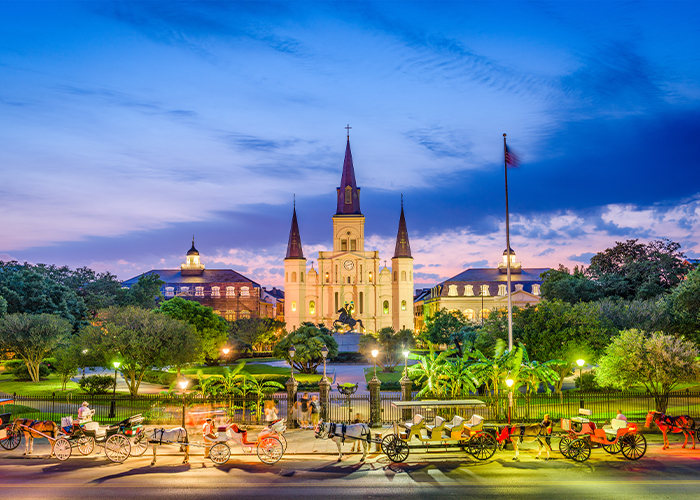